Don't get me started!  If there is one thing that really aggravates me it would have to be self-service checkouts!  Despite the friendly voice behind the screen they have never appealed to me.  To speak of them subtly they are vexing, evil, bothersome masses of trash and I don't like them!

An instance of when these infuriating boxes of madness tried my temper was when my friend Emily was attempting to insert a 50p coin into this machine; it beeped, it buzzed, and it spewed out the once shiny 50p coin.  This process repeated itself until Emily finally got a very psychotic grin from one of the shop attendants.  This male looked like he had been employed in a grease factory for the last ten years and had developed a serious ache problem!  Eventually this attendant 'repaired' the beeping machine, and looking very smug he placed the 50p back into the machine, then to his surprise the machine still spewed the money out.  After a sneaky chuckle on Emily's behalf I suggested that maybe it was the coin.  He replaced the 50p and the machine continued to function correctly.

I'm not the only one to have been annoyed by these machines.  There was an article in the news last year about the growing number of people who purely despise these irritant metal blocks.  There was a comment on the BBC website stating how they 'hate' the 'unsociable machines'.  Shops all over the UK are being plagued with this self-service hell!  They observe your every move just waiting to pounce with the words 'unexpected item in bagging area!' And these by the way, are the words every shopper dreads to hear.  It's the intense shock, the fear shooting through your body.  Have you accidentally stolen something, and was one of the prison guards..  err, I mean shopping attendants going to interrogate you?  You need to get out quick, before you're caught! 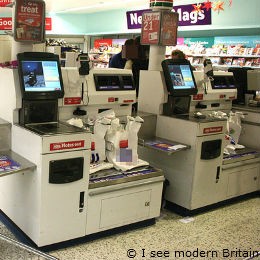 I think that the self-service checkouts of 'doom' should be banned from all supermarkets.  This may not necessarily be supported by Sainsbury's though.  They should have half machines and half people then at least people like me would have a choice!

These machines also cause colossal queue's as nobody wants to suffer using them, but even they look welcoming when the arrogant person who shoved in front of you smells like rotting corpses and has a slight hint of 'cuppa soup'.  But on a more serious note, if we do not stop this spreading to other countries and we wish to save them from this torture, we must get rid of them or at least programme them to be a little less picky and antisocial!

In conclusion they are pointless, wasteful, mindless squares who should be given asbos.  They need to be stopped and we need to be rescued from this dark abyss of fire and beeping.

Can you give a machine an asbo?

By: An annoyed school girl

How silly the Original poster sounds - I have to agree with 'Lord Jimsickle'. There are multiple rules and regulations put down for the behaviour of customers. The customer's children are allowed to do pretty much what they like. If a customer is making a noise I can shut them up and have something to eat about the time I am hungry. If some store manager decides to stand and scream in my ear, or have a sing song with their bakery staff or just selfishly make a female member of staff pregnant. I am supposed to just roll over and use the self-scan tills.

The Assistant Manager urinating on your shopping is unacceptable and the HR manager entering your details is also unacceptable. However I would put that down to shoplifters as owners rather than the shoplifters have themselves to blame.
03/11/14 collar
0

To be honest the technology used by these self checkouts is so poor that you rarely get through the whole process without needing some assistance. That is done by a person.
A bank of 6 of these machines take up a similar footprint to a single traditional checkout if you include the aisle space. They are normally supervised by one or two staff members. So there are no fewer employees than before, just more checkouts.
03/11/14 Samson (Delilah's too busy to post)
0

Was there any need to insult the staff member there who is just trying to make a few quid? Why is his acne an issue?
03/11/14 Lord Jimsicle
1

On a recent trip to my local supermarket for our big shop my partner suggested we use the self service checkout, they all of a sudden evolved from hand basket only to great big self service checkouts complete with conveyor belt that looks like something out of the Generation Game. Consequently i refused and informed my partner that by doing that you are giving the supermarket in question good reason to cut jobs and promptly joined a small queue to be served by a rather pleasant girl, tell be do we get 10% taken off our bill for serving ourselves, I think not.
16/10/14 LancashireLass
1

I refuse to use selfservice machines on the rare occasions when I have to go to the type of establishment that uses them. If everyone did the same the machines would become redundant, whereas if people use them the staff will become redundant and there will be even more jobless people for taxpayers to support.

Fortunately some supermarkets and shops are realising that the benefits are outweighed by customer resistance and increased theft.
20/02/14 Friday Lunchtime
0

furthermore, I bought a lot of items from this store, perhaps I'd better not name them, now with lots of feedback. The till went wrong and the shop returned it under their 12 month returns policy. That's the last they saw of their till, letters sent by recorded delivery or standard post awere ignored, they says. At first I thought they cared but complain enough times and you get back your monet of their standard emails. I'm afraid to shop after dark in the corner shops and it's hooligans with guns and daggers, that will be the end of our communities. The risk, is you will be mugged at gunpoint and don't bother reporting it to the police because they won't bother following it up - be prepared to lose your money.
19/02/14 collar
0

Used one yesterday in Nottinghamshire which refused to deliver change has been taken out of service now. The store manager suspended use of it pending an investigation. Local Residents had called for their supermarket be reinstated with the old tills, and wrote to bosses demanding that this be done.

Jethro, the fact that you think UKIP are the saviours of the British working class shows how naive you are, you're probably quite a nice guy but terribly misguided, supermarkets thrive on people like you, they could sell anything to you without question.

Anon, you come across as someone of very low intelligence.
19/02/14 Tired and emotional
-5

Jethro, T and E's last rant must now convince others that there is something terribly wrong with this person. I think you could well have a point, he/she is the same entity suffering in their own warped world.
19/02/14 Anon
5

Tired and E, The only reason that you have not been charged up to this point with Slander/libel, is you are one and the same person. Games up mate.
19/02/14 Jethro
1

On his facebook Kiwis page he reckons he's been to Chelsea for a £20 'massage', more like he's been to a public toilet in Soho and shared a bottle of cider with a tramp who fell asleep so he rifled through his pockets, found 34p in 1s and 2s, a mouldy pack of Old Holborn and an age old piece of once dry Andrex which he took to Tescos and tried to barter it for a can of own brand cider in the reduced section, someone took pity on him and gave him one (a can I mean) and he even ran it through the self service till, how kind some people are. Still he's got 34p for the coin exchange now.
19/02/14 Tired and emotional
-2

Listen pal, if I ever need a carer it won't be that kiwi rentboy, he's never stepped foot in a proper house before, bit out of his price range, luckily my higher tax bracket income provides him with his much needed 'housing' benefit. I might even pop down to the supermarket later to stock up my fridge which is probably worth more and also warmer than his rented hovel.
19/02/14 Tired and emotional
-6

Injured by a can of baked beans from Lidl

Damaged goods on the shelf in the supermarket