Why do companies have to change their products when they work just fine as they are?  This is a gripe for the shavers amongst us by the way so all the bearded ones can stop reading now.

Ive been using Tesco's twin blade, swivel head disposable razors for a few years now and I used to be very happy with them.  I've tried all sorts over the years, from fixed head single blade, tripple blade disposables to the ones that take cartridges.  I even used an electric razor for a period of time and to be honest I had mixed feelings about that particular experiment.

When I discovered the Tesco razor blades I thought I was on to a winner.  They're blue and come in packs of ten and are pretty cheap.  Also, for a disposable razor they give you a good close shave and you can use them quite a few times before disposing of them.  Well that used to be the case up until a few months ago.  They've changed their product you see and they're no where near as good as the old razors. 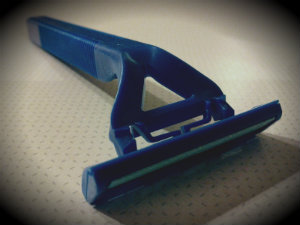 The new razors are a light blue whereas the old ones were a dark blue, but the colour isn't the problem.  The issue I have with them is the fact that they seem to go blunt after only a couple of shaves.  With the old ones I could shave for a couple of weeks before this happened.  In fact with the old ones the lube strip would wear out before the blade!

Maybe it's time to try something else.  Perhaps I'll go back to the cartridge system or venture back into the world of electric shaving.  You know what it's like though, once you've found a product you like and one that works for you - you like to stick with it.

If only they wouldn't try to fix something that isn't broken.  Or maybe it's a case of squeezing a bit more profit out by using cheaper steel!!!

Yes I agree even with say 3 days growth I was only able to shave HALF my face before the pain was too much and had to use 2 to shave my face once. I'm not even a big bad ass stubly person either.
16/10/11 Carlos EL
-4

Marie, you hit the nail on the head there with regards to the environment. In actual fact I don't just chuck the razors out. My parter is able to get a couple of uses out of them too on her legs. This disposable society makes me very sad indeed.
05/10/11 OP
-8

I think you just answered your own question...

Of course, the aim of any company is to make money, so if they can't change the price/pack size etc., then they may opt for cheaper materials, labour cost etc. and gain that way.

The other thing is that some products are deemed to "work too well". A disposable razor that lasts too long doesn't need to be replaced too often, and that's a loss of revenue for the company.
The people, like you, who may switch are few compared to people who will continue to buy the product at the same price, but more often and with (presumably) a higher margin for the company if the manufacturing/materials costs are cheaper.

"Disposable society"... Nothing is built to last these days, to encourage consumption. With no regards as to the impact of that increased consumption (packaging, dumping of old items, etc.) on the environment.
05/10/11 Marie
-1

It all boils down to profit.. cheaper materials cheaper labour and the end production is a cheaper product.
I started buying M&S ladies 100% jogger pants at £9.50 a pair 6 years ago they were nice and thick and kept their shape and washed well, the same pants which they are selling now are thinner fabric and become baggy after sitting down but they are the same price.
05/10/11 Lulu Shambollocks
-15

The end goal for all large corporations is to squeeze every last drop of profit out of you. We live in the era of the disposable not 'make do and mend. Every time some company advertising promotes the launch of a new 'improved product' you can pretty much guarantee that it won't do the job as well as its replacement, or it'll be just as good quality as before, but it'll come in smaller packages or cartons; or nothing much will have changed but it'll be re-branded and cost twice as much. Certainly, robust products handcrafted or UK manufactured - to capture the era of 'make do and mend' and if it falls apart 'get it fixed' are, very sadly, unlikely to be repeated.