Right, that's it!  I can not listen to the radio any more.  I have had enough of the same rubbish every day.  I have 6 pre-set radio stations on my car stereo.  Unfortunately I have just recently changed cars and don't have my CD multi-changer fitted otherwise I would not have this problem.

I have noticed for some time now that all the commercial radio stations that I can tune in to seem to have the same play lists.  You see, I'm a bit of a channel surfer, when I hear a song I don't like or that has been over-played I will change station.

Tell me, where's the variety?

I listen to the radio on my short (20 minutes) journey to work every morning and evening.  Recently my local radio station Oxfords Fox FM, have changed their morning quiz to "Guess the Year".  This wasn't a problem to me until they played a song that I really didn't like so I decided to switch over to another radio station, this time I tried Horizon. 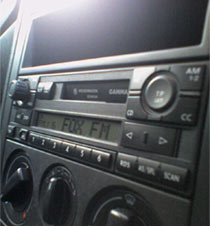 I want to know what exactly is going on here.  Why are all the commercial radio stations playing from the same play list, sometimes in a different order, and now the same quizzes?  It really cracks me up when they advertise themselves as 'your local music variety station' or whatever.  Tell me, where's the variety if everyone is playing the same stuff?

I understand that radio stations have a particular format and have favourites but totally agree. Smooth radio was good when they were owned by GMG sooo much variety and the it turned into a dementia station in 2014. It really wouldn't kill them to play more variety. Also presenters, music & sweepers can be very annoying on chart stations specifically Clyde1 and even radio 2's got worse recently. I recommend either Magic, Boom or PaisleyFM depending on your taste. Still have their favourites but more variety than say... Global!
25/06 burst eardrums
2

Smooth Radio are the worst, not only do they play the same records time after time, they play them at the same time. At the end of news on the hour they play George Michael, we are now putting our clocks right by it. Is it a code signal or just lazy planning. Bye Bye Love, we're off.
11/03 Clothe Ears
1

Yes agreed, and that is why I listen to worldwide and streamed community /independent radio. Even radio six, which is apparently radio 6 'music' plays a monoculture playlist short on varied genre. Part of the problem is the incursion of corporate and commercial pressure. The loss of independent radio in the U.K has been devastating for artists and listeners alike.
03/03 Oaktreeman
1

I am a lover of music from the fifties through to the eighties. There are millions of tunes in the world so why do the radio stations insist on playing the same discs every day? Very annoying! Do the stations have access to this site?
04/10/20 The Urban Scotsman.
1

Bought a DAB radio which we used on Monday for the first time.

Heard Dont sleep in the subway by Petula Clark refreshing not heard it in ages
But heard it Tuesday and Wednesday as well.
Also you got your troubles .and if you want it here it is 3 days running.
Probably more as well
Why not mix it up a bit.
14/08/19 Mac
1

It's because so-called "radio" is fucked up these days, quite frankly. Those assholes Global are to blame and they can sod off. I too am so pissed off with hearing the same stupid brain dead "songs" every fucking day on, e.g., those awful fucks Smooth Radio and Heart. SORT IT OUT YOU MORONS. Smooth Radio was actually A LOT better in the past, e.g. early 2000s, when it had better presenters who made sure its listeners had better music to hear. But not since about 2012, when the station has seriously worsened to the present. Keep away from them for your sanity's sake. It's not just commercial radio - even BBC radio is terrible and both their tv and website are shit too.
19/02/19 rick_l
2

It's fine when you're in a place where you can just switch off. Spare a thought for those who have to work somewhere that plays one of these stations all day. You can't just switch it off. I think what you were listening to was a Bauer Radio station. A lot of local stations all owned by one company. And they set the agenda centrally. You will hear the same songs played over and over again sometimes three times a day if you're unlucky enough to work on all sides of the 9-5 no repeat weekdays. And then they play the same songs not just for a few weeks but several months. I can once remember working out that I had heard the same song more than 90 times if not over 100 during the entire 5 months I was working at this place. The people who set these playlists aren't the ones that have to listen to it, they can just switch off. Time for them to set limits to their playlists. Three weeks on the regular playlist then on to the occassional playlist. That should sort it.
14/09/18 One Annoyed Listener
0

Love the songs on smooth radio but not day after day after day, I am truly getting fed up of it now, keep tuning in coz don't like the other stations
11/07/18 CET
-1

it is just another facet of the maniacal controlling media
like it or not, we are all mugs who are constantly targeted for commercial gain
wake up!!
28/03/17 jojo the circus idiot boy
0

It's ironic that what seems to crop up a lot is people saying that they are playing the popular songs to get people to listen, (so we are listening when the ads suddenly come on) but it literally has the exact opposite affect, I get why they have to for royalties and finance reasons, and as much as it's a great shame, I can't see that ever changing. It's like any business, you do what makes you the most money, and in the stations case this is who are pulling their strings and paying them for advert time and song play time, but we, the listeners, are not the paying customers, I personally like 60's 70's and 80's so I gravitated towards Gold on DAB, but for them it's "Brian Ferry with Virginia Plain, some silly bird singing "the man who stole the world" Van Morrison, moon dance, "Jacksons don't stop til you get enough" those, and whatever other artists they play, it's the same songs by them and never anything other than what the Stn says was a "hit" how can the term "hit" be so ridged, just cos it was no' 1 then, don't mean we never want to hear "in to the mystic" instead for a change, you are treated like numb skulls as listeners and I listen less and less now
03/11/16 DonkyTom
0

I just had to comment on here, where I work ( in a warehouse in Yorkshire) we have absolute radio blaring over the speakers, the station has a 'no repeat guarantee' where no 2 songs are repeated between 9am and 6pm, that sounds fine in theory but what the station doesn't say but does anyway is "we'll play the same songs the next day and the following days ad infinitum..." We have had Real,Heart,absolute 80s and now absolute and I hear the same records every bloody day, commercial radio is SHITE!
19/08/16 timeblue
3