One of my favourite songs from Meat Loaf?s Bat Out Of Hell album is the title track by the same name, but it really annoys me when I?m listening to it on the radio and the song gets cut short.

I know that radio DJ?s have to do a certain amount of talking, they?ve got to play adverts, jingles and there are regular news broadcasts and traffic reports.  I suppose that it must be quite hard work fitting all that into the programme and trying to make it an interesting show.  I really wish however, that they wouldn?t play the cut down versions of songs that I like.

Bat Out Of Hell is just one great song from a really brilliant album by Meat Loaf, but I think the song is spoiled when the proper ending from the album version is completely missing.  I used to play this record to death when I was a youngster, even though it was an old scratched up copy that I bought second hand! My parents must have been really fed up hearing it every night! I guess Meat Loaf?s theatrical rendition style of that title track Bat Out Of Hell just kind of captured my imagination.  When I listen to it, I still can almost imagine that it?s me riding on that silver black motorcycle with the engine throbbing away. 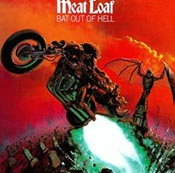 Radio - radio fades out to the ending just as the motorcycle starts...

Anyway, the version they play on the radio fades out to the ending just as the motorcycle starts to roar and I find it extremely irritating!  Do they have to keep songs to a certain length or something? Do they ever get to play the proper version of Bat Out Of Hell all the way through?

I haven?t been able to find out whether or not this version of the song has actually been released to the public.  I suspect that it may be a version that only broadcasters use, but I would be very interested to hear if anyone knows that this is not the case.

Surely I?m not the only Meat Loaf fan that looks forward to tapping my foot along to this classic song.  Please, play the full version!

Bat Out Of Hell Artwork  - I came accross this site by accident, it's a fantastic painting of the Bat Out Of Hell album cover on a garage door (at least I think thats what it is!).

It takes all sorts to make up this musical world. There are those who love BOOH and there are those, like me, who love music.
18/03/11 islwynpaul
-21

I have a large music collection, booh is one of my favourites, but my all time singers award has to go to police officer by smiley culture, no one on earth could copy this feat.

You can certainly get the "radio edit" versions of BOOH on compilation albums, though fortunately there are one or two that have full versions. Other songs that get cut short are Free Bird and Layla.

BBC Radio 2 quite often play "long songs", plus they support Meat Loaf. That's your best bet if you want a chance to hear a full version. They don't tend to crash the lyrics too much either, but apparently DJs have to, to prevent somebody recording the song off the radio and releasing it - a bit of chatter over the start or end makes it obvious it is a rip off the radio.

The strange thing about Meat Loaf is few people admit to liking him, yet BOOH is one of the best selling albums in the world.... closet fans for whatever reason!

I've seen ML live maybe half a dozen times now and I don't think he's quite as good as he used to be. The first time I saw him he did a 2h45 minute set without a break - not many bands can pull that off! Now, since his heart problems, he's not insured to do anything more than 2 hours and I think he has to have a break halfway through.
30/04/09 Swindonian
-15

I went ro see him a few years ago in concert, B'ham Arena. I wasn't impressed to be truthful. He was so out of shape he struggled, struggled to catch his breath.

Meat Loaf's real name is Marvin Lee Aday. He and I attended high school in Dallas together way too many years ago. One day after football practice, on the way into the locker room, Marvin stepped on the coach's foot and the coach said, "Hey, watch out, Meat Loaf." The rest of us picked up the name and never let it go.

Not to be overly cruel, we didn't actually call Marvin "Meat Loaf" but as many did during the period by the initials M.L. Marvin didn't care for it when people starting calling him Mel, and he actually preferred Meat Loaf to Mel. We also called him "Mighty Large" and "Tree Trunks" which referred to the size of his legs as they were huge.

Ha, I have the opposite problem. My boyfriend never plays it all the way through, he can go about six minutes before he gives up and improvises a quicker ending. He "crashes" on a different chord each time. lol
25/03/08 whirlygirl
1

hey there, I am a great fan of meatloaf but I cant think to the life of me what his film is called, its his autobiography and I was just wondering if anyone knows the name, it would be much appreciated
13/07/07 daz
6

The shortened version of "Bat out of hell" is annoying, I first heard the shortened version on a Rock compilation album belonging to my Fella. I gave him the full length version to listen to and he has never looked back, that was 18 years ago now. I have had 3 copies of the Bat out of hell album because they were completely worn out and I can honestly say that I have never became bored of it. I am going to see him tonight at the MEN Arena in Manchester and I cant wait.
12/05/07 Mandie in Manchester
4

meat loaf is a keeper and anyone out there who thinks otherwise can answer to me!!
21/12/06 dolmio
0

Wicked mate I know a chav and I beat him up becuause he said Meatloaf was rubbish!!!
13/12/06 meatloafmad
3

If any radio DJ cuts that classic short, I should cut the DJ short with a chainsaw. The thing that really annoys me about radio is when you get a stupid liberal gimp of a DJ whop has to project his annoying homosexual voice over the top of a song I like!
20/06/06 Thribdescvonia
-13