I've been meaning to write this gripe for several months now, but as I'm so tired when I get home from work I just haven't had the opportunity.  My main complaint at the moment is work related in that we are forced to listen to one radio station all day long and it is quite literally driving me round the bend.  I'm doing some temping in a warehouse by the way and I think most places like this have piped music to keep the workers happy?!  The radio station in question?  It's called Mercia (Smooth Radio).

There's already a gripe out there about radio stations lacking variety in the music they play and the author of that was lucky enough to be in a car on the way to work.  In that situation you could turn the radio off or put on a CD.  In fact as most sensible commutes are anything from 15 minutes to 45 minutes that's hardly a problem anyway.  Try listening to the same station 5 days a week for months on end.  I can tell you now it's quite soul destroying.  If it weren't for the fact that I know I'm leaving in a few weeks time anyway I'd be looking for another job just so that I didn't have to put up with Mercia.  Some of these guys have worked there for years and I really don't know how they cope.  Maybe they just become immune eventually.

There are several reasons that I find Mercia extremely irritating.  The first is the complete lack of variety in the music (if that's what you call it) that gets played.  In fact the same song gets played on average 5 or 6 times during my shift.  You've then got the same thing again the next day, and the next day, right until the end of the week.  It's not just one song that they play repeatedly though, there's maybe a bout a dozen or so songs that just get played again and again.  They seem to focus in around certain "artists" and I swear someone there has a thing for Lady Gaga and Robbie Williams.  The Black Eyed Peas also get more airtime than they deserve and let us not forget Cheryl Cole, Rhianna, Alicia Keyes and Pixie Lott.  You get the picture now I'm sure.  I swear if I hear any more Lady Gaga I'll be going GAGA!    I don't know how many songs there are in the world, probably billions so why do I have to listen same ones every hour of every day? 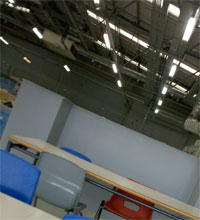 On the subject of the music they play, we do VERY occasionally get a decent tune (in my opinion).  Mercia occasionally play some Eagles, Bon Jovi or Whitesnake, but it is a really rare thing and a bit of a treat in amongst the monotony.  However, someone ought to point out to Mercia that Whitesnake actually did more than one song, and whilst "Here I Go Again" made it into the charts (for what that's worth), it was just a single song in a successful career that spanned decades.  Bon Jovi fared a little better.  They did 2 songs apparently.  Robbie Williams on the other hand is coming out with new songs all the time.  Mercia radio loves to play Robbie Williams and don't we flippin' know it!

Next up are those darn annoying adverts that we hear repeated every so often.  Again there's very little variety and it's getting tedious.  I swear that if I here that "Go Compare" advert one more time I'll simply loose it and bury my head in the nearest cardboard box.  The silly little jingles get right under my skin as well.  It's not "Smooth radio", it's something else beginning with "S".  The news and the weather I can probably cope with, although when you hear the same news every hour during the day you get a little fed up with it.  At least there's something different to talk about the next day though, unlike these adverts that play for weeks at a time several times an hour.  Yes "Go Compare", you can go shove it where the sun don't shine!

Finally it's the DJs themselves I'd like to gripe about.  They never stop talking for one thing and it's mostly a load of inane drivel.  Do these people volunteer to do a job like this or are they actually paid, please someone tell me?  If they get paid then surely it must be a minimum wage job.  I'd hate to think that they earn more than me.  Actually, the old guy in the morning isn't too bad and the producer's weird and wonderful fact of the day thing is vaguely interesting.  It's that other guy though.  Can't name and shame unfortunately, but he does my head in.  Come to think of it, I can't even remember what his name is (probably a good thing), but he just comes across as a complete Chav!    You know the sort, a youngish Jack-the-lad type who's had way too many slurps of Sunny Delight and can't contain his excitement about last night's football results.  It makes me groan inwardly every time when his voice comes on the air.  I remember around Christmas time he got very, very excited, then in January it was all that snow we had that set him off and he sounded like he was about to wet himself.  What??  Is he twelve years old or something?

So as you can see I really resent being forced to listen to Mercia all day, but I have no choice regarding that until I leave my current job.  I'm sure there are worse environments to work in.  In fact the job itself isn't too bad and the people are great.  They either like to listen to this crap or they've found a way of dealing with it that has so far eluded me.  One good thing though is that I have recently bought a new phone, a Motorola Milestone running Android which means I can listen to Shoutcast Radio on the way too and from work.

Anyway, only another few weeks for me and I'm free.  No more will I be at the mercy of Mercia!

Mercia is boring and unimaginative. If there's one radio station in the UK that needs to be shut down it should be Mercia and it's sister station. Radio one isn't much better
03/08/10 Can't stand UK radio
-13

It sounds like Mercia have sent all their listeners to Coventry, or were they already there?
31/03/10 Sent to Coundon
-5

Hey! You're not going to believe this. They actually turned the radio off today for about two and a half hours and it was heaven. Apparently we had some important visitors in. Well personally, I wish they'd come and visit us more often.
29/03/10 Original author
-8

I used to enjoy being a temp working in warehouses. Purely for the radio.

I do agree however, that those damn adverts are starting to grate on me too. The work commute is taken over by my iPod now. Purely and simply because the 30 minute commute each way, I hear 3 or 4 songs at the most, the same songs parted by double backed adverts followed by 5 minutes of nonsensical drivel from the host. HEY, try shutting your mouth and play some unusual, rarely heard music nonstop for 15 minutes. Rare music belonging to people other than Mr Williams, Gaga goo goo and "because I'm worthless" Cheryl Cole.
29/03/10 Chris.
-3

I can totally relate to this gripe. I used to work in a suffocating, dilapidated warehouse where a few bullying and domineering Alpha males and females insisted on forcing the same mind-numbing radio station (Key 103) on everyone whenever they were in the warehouse. Just to make the mental torture worse, ignoramus and selfish Neanderthals would decide to turn the volume up even louder then usual just because they were working at a distance from the radio. The fact that those unfortunates working close to the radio were thereby at risk of having their eardrums shattered did not bother these narcissistic cretins in the least. Due to many insufferably long years of this sort of mental sadism, instead of being devastated, I was jumping for joy when I was made redundant.
28/03/10 BloodiedButDefiant
-15

This is so true! I have the same problem except it's Touch FM, same songs, same adverts. The adverts are that annoying I'd actually avoid using those businesses just out of principle...Denton Blinds, the Plough Inn, WeBuyAnyCarDotCom etc etc.Enough to drive anyone round the bend.
28/03/10 alice
-18