It’s the same old story on the radio and at the local nightspot.  "Text us your requests" or "please keep the requests coming in and we’ll play your favourite song for you".  They never do, especially if you request rock or heavy metal.

If you just happen to like rock or heavy metal, you’re highly unlikely to get your song played though.  Unless you choose mainstream pop music or a song that the DJ likes anyway your request will get ignored.  A classic example of this recently happened when I was listening to my local radio station.  Right at the start of their two-hour evening show I sent a text requesting that they play Forever Free by WASP.  It’s quite an old track, a little heavy in places but quite acceptable for the radio I would have thought.  Anyway, in between every song they played they still pleaded with the listeners to send in more requests.  I never heard my song in amongst all the commercial drivel that they played. 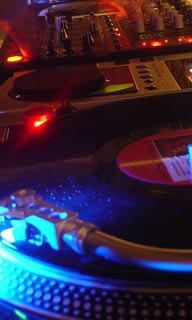 You get exactly the same in nightclubs and pubs that have a DJ spot at the weekend.  If you’re lucky they will play a ‘mini rock session’ which usually consists of Bryan Adams and The Summer of ’69, some Queen, The Darkness and maybe some Guns ‘N’ Roses.  In other words those rare examples of ‘soft publicly acceptable’ rock songs that get played to death on Radio One and in some cases make it into the charts.

It’s all utter garbage and anyone that listens to the radio in this country just gets brainwashed with mindless drivel.  It’s bad enough having to listen to their poor sense of humour and pointless chatter about celebrities and soaps in between tracks, but when the play list is as boring and predictable as it is, you might as well just switch off.

No wonder fans of real music are starting to tune into Internet radio and to stations across the pond.  In the US there are some really good rock and classic rock radio stations that put broadcasters in this country to shame.

My advice, send your DJ a request.  Request politely that he or she broadens their taste in music a little and maybe slips in the odd decent rock song.

Two months ago, I emailed Janice Long at Radio 2 with a request, as part of the "Tunes Of The Unexpected" section that she has on her show. The purpose of that is to request obscure or overlooked songs that you don't normally hear on the radio. I requested "Sky Burial" by Ash, which I think is an epic instrumental, and because I felt that I don't hear very much of this great band, however this doesn't get played. My guess was that at 10mins 16secs in length it was too long, although it didn't stop her playing "Weekender" by Flowered Up on at least 2 occasions last year, and that track is almost 13mins long! What gives?!!
05/06/12 Andrew
1

I rang Heart radio and asked for Thompson Twins, Four Seasons, Mike and the Mechanics, Bronski Beat, and Stephen Duffy. no one there had heard of any of these
29/04/11 kemalatagayturk
-8

I lost count of the hours I have tried to get a song played on Planet Rock. Perhaps my choices were not on their playlists, who knows?
18/03/11 islwynpaul
1

Heart refused my request on many occasions, as I emailed them, texted them & last throw was to phone up got through to Toby's receptionist & asked could I ask you to play True Faith by New Order so she was so stupid & asked who's New Order so I said don't you know & then gave me this stupid answer got out of hand so I said Im phoning Virgin Radio (before Absolute) & she said yeah you do that & slammed the phoned down. I was in luck after got through to Russ Williams he said ok no problem & answered my request told him what Heart said (this wasnt on air) & since then will never listen to Heart again
01/12/10 Raj
-18

AJ - Are you part of the stupid brigade. This was a gripe about DJs who refuse to play requests, it's not an advertising platform. dumb bee-ach.
11/09/10 GeeBee
-4

With reference to Rock_is_King_259...I present a rock show on an Internet radio station. I do not have a play list, I do not have someone standing over me telling me what to play, I do not have avertisers telling me what to play, I don't even have a script. The only track that is "pre planned" is the first one, after that I go with the flow, old school style. I play the CD's I choose, not a computer generated playlist. As for requests, I get a few by mail, no phone line, but I always ask listeners to request an artist or band, or perhaps a year and I will sort something out. I have a very extensive library, some 3500 cd's, but can only take 300 or so to the studio.
14/05/10 The Rock!
-16

oh yeah, and our music is scheduled, sometimes weeks in advance by our program/music director, the DJ's literally get yelled at for playing requests if they dont follow ALL The rules.
29/01/10 MediaMessy
-10

I'm a radio DJ and there is a whole mess of rules you have to follow with music. For example, songs in our station are categorized under letters by relevence and you can only replace songs in the hour that happen to come up inder one specific letter category. That being said you also cannot play an artist that has been played in the last 3 hours or is scheduled to play in the next 3 hours. You have to also have a solid audio file from the caller requesting it, which means no crackling phones, cuss words, incoherent requesters, etc. It's more than we just dont want to play your song. We may not even like the music of the station we work for so it wouldnt matter anyway. There's lots to consider and it's one of my biggest pet peeves when people call up and complain that we didn't play their request. I never promise, I say I'll try, so if you dont hear it, try tomorrow.
29/01/10 MediaMessy
-7

Ram FM, all they do is re-shuffle ninty-nine per-cent of the the songs that they had on yesterday, and they have been doing this for at least ten years, we have to have it on at work,

At my same workplace in the late seventies, we had an eight track cartridge player, piping music to the shop floor, which played in a continuous loop until some-one changed the cartridge, rather like Ram FM, some things never change,

As soon as I get out of work into my Volvo I put on smooth radio, they always put on records that you would have requested anyway
13/11/09 Gainsborough lad.
-17

On many occasions, particularly on bank holidays, christmas etc, on Radio 1, they have a "10-hour takeover" show, where you can send in your requests.

A couple of weeks ago, I was listening to the Saturday Request Show, and texted in to hear a Girls Aloud song (yes, I like GA..), and the DJs were saying - "If you'd like a request on this show, keep your texts coming in".

I waited with baited breath for my request to be read, but they completely ignored the rest of the request texts and used those gaps for playing either a new release or the DJs Record of the Week, then the next minute, they've switched to taking telephone requests, and strangely enough, they must have only taken 2 calls; I had a go myself, the phone was just ringing constantly.

After about 20 minutes, I gave up, then they moved onto another feature involving calling a lady who was on the phone, to go through her ideal party tracks.

To cut a long story short, it was such a con.. I wouldn't be surprised that the callers were of those who actually work for R1 in one way or another.

This show moved too quickly for my liking - all they said at the end is thank you for all your requests, and sorry that they couldn't play them - the show is 3 hours long (!!)

Instead of complying with the playlist, couldn't they have made an effort to play the incoming requests instead?

And DJs don't pick the songs, management do, said Tom a few entries ago. I am lucky I am involved with a small compeatley independan internet radio station, All of the music is chosen by the presenters/DJ's and we will play requests. Each show presents a diiferent style of music from Rap, which personaly I can't stand, through mainstream pop to Rock. We have all the relevant licences to broadcast on the Internet, we are not a "pirate" operation. Unfortunatly we are in the minority as far as legitimate broadcasters go, as Tom is right it is managment who chose the music that is played to keep advertisers happy, and advertisers is another thing we do not have.
29/11/08 Rock_Is_King_259
-8

I agree wholeheartedly with the words in the original gripe as I had the same problem in the 80's (and, ironically, the music was a whole lot better then although I never realised it at the time). I got frogmarched out of a nightclub once because I dared to question the DJ's choice of music on a "Rock Night." I got married in Las Vegas recently and if you want to hear some ace rock music check out the Planet Hollywood. Granted, they played "trendy" stuff late on but the rest of the time it was rock all the way (all types of rock too). Bliss! I also agree that the internet radio stations - especially in America - are more open-minded as to what to play. I don't even listen to mainstream radio anymore, it is drab drivel, it all sounds the same and the fact they now have that rap artist at Glastonbury speaks volumes as far as I am concerned.
29/06/08 thebes1966
-1