There are many ills in British society today but I thought I'd start off with something tame but gripe-worthy.  Why is there an obsession with American Rap and R&B, which are both very primitive, lazy forms of music?  They either anti-social or bump 'n grind lyrics, often with samples stolen from other popular songs.

Where are all the great British rock bands?

Please explain to me how a British youngster can identify with music borne out of US ghettos that represents a US way of life?  Where are all the great British rock bands?  Great examples such as Queen, Def Leppard and Led Zeppelin just don't happen any more.  For some odd reason, people thought The Darkness were here to save rock and roll but look how that ended up.

I don't get Amy Winehouse, Lily Allen, Kate Nash, Amy McDonald etc etc.  The obsession with these 'artists' is a sad testament as to the mediocrity of popular taste and what's with all the 'The' bands who have to think up ridiculous names in an attempt to disguise the fact that their music is extremely average.  It all sounds the same, can people not hear this?  The vocals are shouty/whingey, guitar playing is pathetic and the production sub-standard. 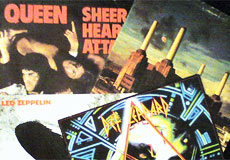 The abundance of reality music shows is a testament to the sorry state of British music.  And people are surprised Brits don't crack the US market (Consider Winehouse's Grammys a tragic American mistake - just like Iraq).  I often wonder if people are actually thinking for themselves about what they listen to or are they just blindly following trends (as dictated my media/record companies/influential people) to fit in.

Can you honestly argue about the artistic merits of British music these days?  For the record, I listen to all types of music (except those referred to above), but especially, heavy metal, AOR, trance - and no, I'm not British!

There are few good new rock bands in the UK anymore, and those that exist are so far underground they inevitable go unnoticed, even by rock/metal fans. Scotlands power metal bands, Alestorm and Gloryhammer are a great example, technically inspiring if a little 'tongue in cheek', but unknown, even their own towns of Perth and Dundee.

it's a far cry, and a depressing state from the pioneering days of yonder. British bands were instrumental in pioneering nearly every metal sub-genre, from the first tri-tone devil riffs from Tony Lommi's severed fingers creating the first metal sounds. Soon after Sabbath we had pioneers like Priests and Maiden and the NWOBHM, then Venom with black and speed metal, Napalm Death with grindcore, Carcass with Melodeath and Dragonforce with Power Metal.
But with the inception of mass production and an era of talent shows, came the end of music in Britain. Factory farmed simple music, with its stream of mind numbing melodic hooks, autotuned voices and computer generated rythems, garnished with lazy, arrogant lyrics that resonated with teens made more money, and musical integrity was thrown out with the cat . The "artists" of today are Macdonalds workers in comparison to the 5star Michelin rock gods of the past, they are to music what Dr Suess is to medicine.

Even good bands like Scotlands Biffy Clyro seem to have traded in their innovative, raw sounds for a more subtle, pop pleasing one.

There maybe some rock bands out there, but for a British metalhead, the whole outlook is a depressing one.
13/04/17 Edd
0

The Beatles, The Who, The Animals, Procol Harem, Joe Cocker, the Rolling Stones, all said the played Black American music. the crap you blokes got now after 2000 , I dont know what it is but no one will remember that coffee shop,, Michael Jackson sampling or Smokey Robinson sampling stuff, five years from now let alone 40!
28/01/17 Dodger
2

Im 65 And i love spotify and Youtube I love Mashups My view of Spotify is if you smoked 20 a day it cost you best part of a Tenner. Spotify £9 a month is a gift
My current musical taste is

What does Bother me Is with the powers that be want us to embrace Digital music. I recently Ripped 2000 cd to flac files. put them on a WDcloud device bought a streamer. Sold my Cd collection for a staggering £100 (yes i know Sad or what ) I got told of big time for this because The commentator says That I have stupidly sold the hard copy of all my music collection. You should have put them in your attic.

Anyway i miss the covers already. I have another passion for Jazz. I Hate certain musicians There are drummers that are to energetic for me in Jazz I avoid Philly Jones at all cost and guitarist Jim Hall. (He has a brother Albert) I can no longer find this information under the digital format. Which I love to be honest.
14/08/16 Smiler
0

Music has changed because young people has changed. AND NOT FOR GOOD. It's not a mere shift of taste. But a total decadence of the spirit and the mind: this is what has happened and the music reflects it. Now the question is why this has happened..
12/09/15 Nowhereman
3

Personally I never "got" Queen, Def Leppard, Lennon or virtually anything before 1977 (Zeppelin, The Doors, Velvet Underground and the original Fleetwood Mac being the exceptions). Good job w'e're not all the same. My Mum would buy anything and everything Cliff ever made.
21/09/13 Punk4Ever
6

I think the point really comes down to this --> " I often wonder if people are actually thinking for themselves about what they listen to or are they just blindly following trends." Its clear to me that people quite blatantly blindly follow trends, there is way too much emphasis on image, celebrity magazines and gossip for it to actually be about the music! The shelf life of chart music is poor and tracks never become timeless, its all about a 'quick fix' which is a reflection of an X-Factor generation. This gripe strikes me as being less about the availability of good music and more about frustration when considering why the thick-general-public seem to be more and more drawn into this mind numbing generic auto tuned chart music churned out for nothing more than profit. The corporations manufacture rubbish music based upon image and marketing in order to make a cold and calculated profit and hey presto, Simon Cowell and his little friends have their hands in the pockets of the nation much to their obliviousness. If you feel frustrated about this the likes of 'the Guetta sausage factory' and other instant-autotune-smash hits then thank your lucky stars you have the ability to see through the shallow plans of the money grabbing fat-cats which perpetuate the trash acts in the music business and that you are able to identify and enjoy good music. The masses and the trend followers will fail to enjoy that feeling you get when your find a piece of music that makes the hairs on your arms stand on end ; )
08/06/12 Stek
10

The reason there isn't much good music available these days (and is likely to be the case from now onwards) is because people refuse to pay for the albums or singles so that the artists can get paid, people download for free instead!... Bands and singers have to put in a lot of hours of practice to become world class musicians, however, they all have bills to pay so instead, they have to go out to work. This eliminates 90% of their practice time, hence, we have all these crap artists and bands. Plus, due to the onset of technology and computer music, music is being produced by producers who cannot even play one instrument, they are just good programmers so the quality/content of music is limited. Plus, there is a few good bands and artists out there but they don't make millions, so labels don't promote them which makes it impossible to find them.
The only way to change this is for all to start buying good music instead of downloading for free, this will spur on major labels into investing in good music!
08/05/12 Music Diplomat
1

OK, granted, some of the popular music is crap, but that's just some of the British music scene. OK, we might not have The Clash, but we have You Me At Six, Enter Shikari, The Blackout, The King Blues, and loads more-you just have to look. Pop music isn't all that's out there-just because you don't hear a band on the radio doesn't mean they're not there.
08/04/12 Holloway
3

Seriously, what some people complain about on this website is just unreal. Honestly, narrator Dave, get a life. Everyone's entitled to their own music taste. I like quite a lot of the music you slated above, but if you're really that bothered, some British bands I like are;
The Vaccines, Biffy Clyro, The Libertines, The Cribs, The Futureheads, Foals, Enter Shikari. But at the same time, why don't you stop being so narrow minded and open your mind to new things. Seriously, who finds boring people like you impressive in any way. Oh, and get a life, I've already mentioned that, right?
17/05/11 Dan
6

good music is always out there but you gotta look for it and don't believe the hype. Use the internet, Spotify, mflow etc you will be surprised by the good stuff there is.
18/03/11 islwynpaul
0

The world has changed since those few British bands could sell out stadiums and at the same time enjoy success in the singles charts. But it is still happening under the radar, modern British Bands are shifting huge volumes, only a fraction of the bands of the 70s/80s/90s, there are many reasons for this. The sheer volume of music and number of genres has mushroomed beyond comprehension and pop music seems to cut through the middle and is played by the primary radio staions and clubs etc. People hear it and buy it. How do the DJs chose what is worth playing\?
25/02/11 CrazyHorse
6

the british people are so uneducated hence the big football following.its a mindless boring sport keeps the unthinking masses happy.as a nation we are a load of gutless morons who are scared of our own shadows,they do as they are told without question, dont like anything controversial decent music is only for the thinkers .i rest my case
25/02/11 cj
6

There are some great British bands in existence today Muse, Biffy Clyro, Bullet For My Valentine, Lostprophets, just off the top of my head. However, they are not given a platform like the bands from past eras that you listed. Pop music saturates the market to such ridiculous extremes, even american bands don't seem to be cracking the top 40 too frequently. The mentality of the youth has changed, they want to listen to hip hop and Drum and Bass etc. rather than rock music in the 21st century, and that's fine by me, I just ignore the charts completely and listen to my own stuff.
08/02/11 Matty
-9

Out of curiosity, did he manage the get the music turned off or at least a better choice of music?