How many times have you driven to work in the morning and either on a dual carriageway or parked at traffic lights looked at the car next to you; only to be confronted by the sight of some Muppet with a mobile phone glued to his or her ear.

It is a sight that is now becoming increasingly common as more people than ever before have mobile phones and people drive to work rather than use the pathetic public transportation system (see previous gripes!).  However, a recent study at the Transport Research Laboratory sponsored by insurer Direct Line has provided new evidence that driving and using a mobile phone may be more dangerous than driving whilst under the influence of alcohol.

The research showed that on average the reactions of the driver were nearly 50% slower than when driving normally and that even using a hands free kit did not completely eliminate the distraction caused by having a telephone conversation whilst driving. 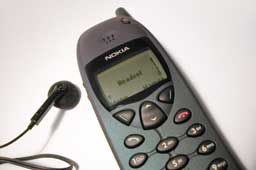 Using a hand held mobile phone and driving is illegal in many countries including the UK and those caught in this country are usually prosecuted for dangerous or careless driving. Some MPs however believe that it should be treated as a separate offence and are currently trying to push bill through parliament banning the use of hand held mobile phones when driving.

It is not just the Nokia wielding maniacs that give me cause for concern.  A friend of mine emailed me this morning to tell me about a woman he saw driving at around 100mph in a BMW with her face close to the rear view mirror as she applied her makeup.  Also, the number of times I've seen a sales rep sitting in his company car either shaving or reading the paper just never ceases to amaze me.  Why???

With the reduction in police traffic numbers in the UK it is now becoming a trend where dash cam owners are handing in footage of drivers using mobil phones while on the move. Some drivers are reviewing their recordings each day. In my area this has led to many convictions because the police are willing to accept the footage as long as the date and time stamps are correct and the ID of the driver is positive. A few dash cam owner have also fitted a rear facing camera. You never know who is watching you these days.
31/05/18 Next
1

Yes I agree using a mobile phone while driving is a very dangerous practice but what about the number of pedestrians talking on mobile phones while crossing the road but as usual its just the motorist who as to take care to avoid hitting them.

I am not saying motorists should not take care but why should not some of the care come from the pedestrians themselves and if they are proved to be negligent while crossing the road at the same time as using a mobile phone and this results in an accident they should be prosecuted and any damage or injury they should be made to compensate, yes this may mean the pedestrian taking out insurance cover like the motorist. Why should motor insurance pay for it all ?
13/05/11 mick
62

What you gripers do not realise is that the motorists that use their mobile phones whilst driving are most likely taking or making a life or death call..... Oh Christ! I've just lost control of my steering. Now I am am in a life and death situation. Crunch!!!"
23/04/11 scholar
90

In our area the police operate something called Operation Crackdown. This provides the opportunity for members of the public to report examples of dangerous driving or abandoned vehicles. You can report using an 'on line' form. You need to identify the place where the event occured, a description of the incident and brief details about yourself. I don't know if all forces have something similar.
07/04/11 Abruzzese
21

Well Bill I was going to suggest you take a photo of her on your phone and take the pic to that rarity a police station, but on second thoughts they would take the easy option and find a way to prosecute you. So I suggest you wait, there is more than one poster on GOW wearing blue, it is highly unlikely but maybe they can come up with an option, one of their acolytes may also come up with something.
07/04/11 Boblet
-91

Ive just seen a woman talking on her cell phone while driving in Devizes, Wiltshire. Does anyone know where I can report it? I mean if I went to the police, would they do anything? Bill Wakeham at liamjose1971@hotmail.co.uk
07/04/11 Bill Wakeham
-89

Is it an offence to ring somebody knowing that they are driving?
31/03/11 SIGNALMAN
-59

Recently I nearly got hit by a courier speeding round a corner whilst he was using his phone.
17/03/11 Ian
87

Saw THREE people using their mobile phone when driving this morning when waiting for a bus!
Will people ever learn that it is ILLEGAL to use your phone when driving except in an emergency? Need tougher penalties for doing illegal stuff.
22/12/10 i'm watching you
-91

I think mobile phone are stupid because loads of people gets ki11ed by them and use shoud only use them if nessesery and I agree with every body.
14/12/10 bad man
-28

Ok so its illegal.. but really this "crime" is just another piece of overreaction. The police seem to want to prosecute anyone who takes their hand off the wheel (remember the woman who was nicked for eating an apple in her car?)
I do not support the use of phones to chat while driving anymore than I do any other form of poor driving but the figures (such as they are ) do not support the reaction. 0.3% of fatal accidents occured while a phone is in use (which doesn't actually mean it was the reason for the crash). So yes, we know its stupid. we know it impairs driving..
The real killers are excess speed and dangerous manoevres and these shoud be targetted first. I count using a phone to chat in moving trafic as a dangerous manoevre, but holding it or answering a quick call on an empty road as just stupidity; for which you shoud be penalised only if theres an accident
03/09/10 cheeese
-103

If you use your mobile phone whilst driving you deserve a kick up the A*SE!
05/07/10 crazyperson
27

HELLO POLICE -- TRY USING CAMERAS TO CATCH PEOPLE ON MOBILE PHONES. I could even demonstrate, for free, how to use a video camera to catch people on mobile phones, since I have yet to see evidence of police capability in this area. It's really simple. You get a video camera, you point it at traffic, and BEHOLD -- you catch people on mobile phones! Simple!

I could literally stand outside my house and catch tonnes, with undeniable proof they were doing so!

It's a quick and easy way of increasing police figures without really doing any work. Yet they don't seem to grasp this simple concept!
09/05/10 James
86

Dangerous things people do when driving

Speeding fine by text message, but no letter?