It seems to be standard practice nowadays for motorists not to bother to indicate when changing lanes on a motorway, and not to indicate at a junction or at a roundabout.  They are used so infrequently that one would almost suppose that cars are no longer made with indicator lights.  Quite often, as a driver and as a pedestrian, I simply have wait until the car has moved on.  'Oh, I see, you're going that way are you?' I mutter to myself.  Does anyone remember the section of the Highway Code about signals to other road users or is it assumed we're all telepathic?!

This dangerous practice seems to be compensated however by the over-use of the horn.

By the way, the Highway Code (rule 92) says "Use only while your vehicle is moving and you need to warn other road users of your presence.  Never sound your horn aggressively."  So why is the horn is now used as a communication tool to say 'hello there', 'I'm back' and 'bye-bye' at all hours of the day and night?  And have you noticed the twin horn blowing which occurs these days?  This is when a disgruntled driver beeps at another driver for doing something wrong.  The second driver takes offence at this and (despite being in the wrong) beeps back even louder, as if to say 'up yours'. 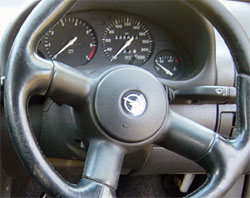 I work near a busy mini- roundabout and I hear this twin beeping all the time, mainly because many drivers don't seem to know who has right-of-way at a mini-roundabout and many people these days refuse to be told they are in the wrong.

I also thought it was now illegal to hold a mobile phone whilst driving and yet I see this regularly, especially at the above mentioned roundabout, including young mothers with children on the back seat, and yes, they don't indicate either.  I think the reason for this appalling behaviour is because there are too many rude, ignorant, thoughtless, selfish people and I blame the media for that to a great extent, but that's another story.  Driving whilst using a mobile phone is dangerous and plain stupid!

it appears that the use of direction indicators is now optional now !!
19/05/17 bigdugdad
1

Jon, Simply and crudely put, "There are too many rats in the barrel". But our wise and cleaver previous governments thought it a good idea to bring more and more people to an already overcrowded island and make its residents even more stressed and anti social. Now you know why UKIP are going from strength to strength.
15/10/13 Jethro
7

I came across this post because I live next to a fairly busy road and I am constantly hearing aggressive beeping horns (often the long baaaaaaaaaaarrrrrrp !! too) and usually followed by the customary "F-U" return beep. I also hear it from my office window on a regular basis. I suppose the reason I looked it up is because i'm wondering, are people generally worse drivers than they used to be or are we simply getting more intolerant as a nation?
Too add, have you also noticed how many times you hear the sirens of an emergency vehicle? Not that I would ever complain about these fine people doing their jobs but whilst growing up, a siren heard was cause for alarm and turning of heads and exclamations like "Ooh, I wonder what's happened?" Now it's a several times a day occurrence and nobody batters an eyelid. So, as a nation are we also getting sicker or more accident prone too because most of these sirens originate from ambulances?
15/10/13 Jon
6

With the new powers the police have just gained for on the spot motoring fines, you can be sure that some of them ( pi**ed off with bad driving habits) will be on the look out for said occurrences. Not only will you face the £100 fine or a correctional driving course , but they will rub salt in the wound by telling you " You're a naughty little person", and you will have to stand there and take it.
17/08/13 Ello,Ello,Ello
2

I moved from London to Surrey Heath 18 months ago and the lack of indicators when turning corners or coming off roundabouts is shocking out here in the leafy 'burbs. I know London is the home of pushiness, aggressive driving, rudeness and all kinds of weird driving but at least they use indicators there! In Surrey Heath, every day I'm waiting to enter a roundabout not knowing if the drivers to my right are taking that exit, or going straight ahead, or turning right. It's as if everyone here has psychic powers when it comes to driving which we outsiders don't have.

It's not good claiming that we should know which way people are going from what lane their in...if that was good enough, cars wouldn't have indicators in the first place. Are these people loathe to use the single calorie of energy in their bodies by flicking the indicator lever? Why not be extra safe and use the damn thing!
16/08/13 Rhubba
5

I was always told the golden rule in driving is that you should assume every driver on the road is an idiot and hope that other drivers think the same about you. And that human beings often do completely unpredictable things. Why should you assume that just because they are behind the wheel of a one ton killing machine they would be any more predictable. If you complain about other drivers you are on an ego trip of your own and forgetting the golden rule. If everyone followed the approach of driving badly themselves to 'teach the other driver a lesson' is that likely to turn out good for everyone.
25/03/13 Litesp33d
0

Why do we need indicators i always use my hand out of the window like it shows in my highway code. Why the rush to dash here and there. I think the speed limit on all village roads should be 10 MPH anyway.
08/09/11 Old Tom
-1

Agreed! I get mad when waiting at a local junction ready to turn right. The car approaching from the left on the main road shows no signs its not going straight on, but as it reaches me, it turns left. What inconsiderate prats these people are. Incidences such as these are a daily occurrence, and if I had my say, if they're caught doing in consistently, a driving bad would follow. Idiots!
15/05/11 Vin
0

I find that a large minority of drivers seem to have lost the ability to change gear while driving. A large part of the 'art' of driving is choosing the right speed for the conditions, yet quite few folk seem unable to change down a gear or two.

This lack of ability of drivers to change gear properly can be seen in these folk who dribble out of side roads and then take ages to reach the speed of the traffic on the main road, basically because they are in 4th or 5th gear, rather than 1st, 2nd or 3rd. They are the same on roundabouts they struggle to accelerate onto the roundabout and then exit slowly as well whilst they fumble with the gears. For goodness sakes, can't these people just buy a car with an automatic transmission?

It gear changing phobia also applies to the 'middle lane' merchants. They can't accelerate to overtake slower vehicles. Please, please please - learn how to change gear before you cause an accident!
17/04/11 Timelord
25

Actually John, this is an absolute curse on a wet winter night, and even worse is indicators right there in front of you when they are stationary waiting to turn at a junction at night.
Another pet hate of mine is glaring headlights on full beam, especially cars with xenon lights fitted, they are absolutely blinding.
12/02/11 the crash expert
4

Drivers who, instead of using their handbrakes when stationary for more than just a few seconds (especially at red traffic lights), leave their footbrake depressed until they move off again. The result, rear brake lights so bright, they dazzle, impeding the vision of the driver behind.
08/02/11 John
-6

I would agree with Andyj about never ever trusting indicators, I wait until I see physical proof such as their wheels actually showing signs of turning. I cannot count the number of times I have seen people go straight on still indicating to turn off. I learnt this lesson very nearly the hard way a few weeks after I had passeed my test, it was a near miss luckily, I was in a side road wanting to turn out into a main road, I saw a car coming towards me indicating, I stupidly thought oh good I can go, big mistake! he was still coming straight on, I went, I floored the gas and he just missed me as I cleared the centre of the road. I never made that mistake again.
14/11/10 the crash expert
16

If I've been tailgated (usually on the way home) I get revenge by slowing down before my left turn, pretending to be lost, then spotting that I'm at the correct junction (by now I've almost stopped) I turn left without indicating. The look of fury on the helpless idiot behind me is excellent.
09/09/10 Grassy
-1