Parking on pavements is right up there as a most loathed, but the arrogance of a significant minority of motorists doesn't stop there.  I happen to walk along the ring road that encompasses the city where I live fairly often.  The walk takes me about 8 minutes and at peak times I don't think I've ever managed to do it without seeing some self centred oaf blithely chattering on a mobile - the record is no less than four.

Today one smug so-and-so was doing so on a nearby side road when he was obliged to stop beside me and, since his window was open, I asked him, more politely than he deserved not to drive whilst on the phone.  Typically, his response appalled me even more "So what?

Having lost count of local pedestrians, cyclists and motorists killed, maimed or simply distressed by the my phone call is more important than your life brigade I was absolutely incensed.  So much so that I immediately called the local police station and gave them his details (personalised number plate and shiny new Ferrari so he shouldn't be hard to trace). 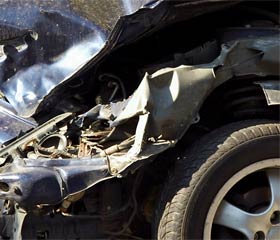 Hopefully his offence will have been caught on CCTV so he'll get a fine.  Not that it'll mean much to such a plutocrat!  Isn't it time that using mobile whilst driving equals loss of licence?  No ifs or buts, no time frame imposed just zip and it's gone!

In my walk along this moderately busy road I have seen motorists having their breakfast, numerous van/lorry drivers studying atlases (inc. one using a magnifying glass!), reading the paper/magazines, doing make-up and even taking photos (it's a great view of the cathedral).  No wonder these bozos regularly drive through the pedestrian crossing against a red light!

However, the worst ever example of such idiocy was having a motorist zoom past me at 90+ mph on a motorway whilst reading a novel that was propped up on the steering wheel!  No joke!

It is not only German car drivers, it's all makes. There's a public hall in my area that now holds speed awareness courses three times a week, the hall is always full for the four hours. What with Drugs, booze, and speeding the roads are becoming lethal places to be when driving. There needs to be draconian punishments to stop this creeping cancer attitude to " I'll do as I please, there's no one to stop me".
17/12/19 Jethro
6

We all hear of some German car drivers being thugs on the road, but look at it this way. Without them and their bad driving habits, (when caught by the Police and fined), they are helping to contribute to keeping our council taxes down. They are in fact paying the police to catch themselves. Speeding drivers also keep the speed awarness course firms in business. Mad old world isn't it.
16/12/19 Jetty Boy.
7

Mrs Trumpet, what I do is keep to a simple bread recipe, but substitute honey for sugar, garlic salt or onion salt for ordinary salt, olive oil for butter/oil. You have to experiment with the measures. Good luck
06/06/11 Boblet
-14

Yes, very likely and also Generalist. It’s the same style of writing; he also liked to bury people under a blizzard of links and quotations.

It seems to me that "Carrot checker/Dwpotads" is probably the same person as "Factchecker" on the global warming debate.

Being anti-driver and a disciple of man-made global warming usually go hand-in-hand.
05/06/11 grumpyoldwoman
-10

Cyclist, you started by saying that car drivers who text or use their mobiles while driving are “scum”. I asked you to show us where it said that any of the drivers were doing that. Would you please quote the part that says that or admit you were wrong?

Now, you are trying to pick a fight with me about helmets when I have not mentioned them. If I did, again please quote me.

I believe, from the hectoring tone of the person who called himself "Drivers who phone or text are dangerous scum", and is now rudely and childishly calling himself "Carrot checker" that the bully "Generalist" is back.
05/06/11 Fed up pedestrian
-16

As for the coroner Peter Bedford who said that 'wearing a helmet could possibly have saved Mr Honour’s life.' The Corner isn't remotely competent to comment on such matters as his incredibly ill-informed and demonstrably wrong comment clearly shows, there is good reason to believe he over-estimates his competence: http://tinyurl.com/dffhgv

Regarding helmets
'The level of protection offered is
less than that given by helmets for
motorcycle riders and is intended
to give protection in the kind
of accident in which the rider
falls onto the road without other
vehicles being involved.’

Carrot
It is perfectly possible that the 'wobbling' was in-fact the cyclist avoiding road debris or pot-holes. However, assuming he was just wobbling, what does this say about the competence and wisdom of drivers who drove so as to collide with the cyclist? It shows them to be unfit to drive. The first driver clearly wasn't paying attention - hence 'the 79-year-old appeared from nowhere'. They weren't paying attention, distracted, or asleep when the collision occurred. The highway code makes repeated reference to driving in a manner so as to maintain a safe stopping distance: http://tinyurl.com/65ooe9s

Had these drivers been driving safely, the collision could never have occurred, because their courses would have never crossed and they would have been able to stop safely.
The driving was incompetent on multiple counts. The Coroner, who along with many drivers is either ignorant of the rules of the road or just ignored the Highway Code.

Rule 146
Adapt your driving to the appropriate type and condition of road you are on. In particular
try to anticipate what pedestrians and cyclists might do. If pedestrians, particularly children, are looking the other way, they may step out into the road without seeing you http://tinyurl.com/pk4yk6

Rule 212
When passing motorcyclists and cyclists, GIVE THEM PLENTY OF ROOM (see Rules 162-167). If they look over their shoulder it could mean that they intend to pull out, turn right or change direction. Give them time and space to do so. * Overtaking (162-169)

Rule 213
Motorcyclists and cyclists may suddenly need to avoid uneven road surfaces and obstacles.... GIVE THEM PLENTY OF ROOM and pay particular attention to any sudden change of direction they may have to make. http://tinyurl.com/22b486
05/06/11 Carrot checker
-10

It was a driver who had safely passed him earlier that morning and was not involved in the crash who said he appeared,

““very wobbly similar to a child first learning how to ride a bike.”

Paul, both you and the person who posted the link have assumed that the drivers were texting or making calls on their mobile. Nowhere in the article does it say that that was the case.

The coroner recorded a verdict of accidental death.
04/06/11 Carrot
-8

Couldn't agree with you more! Reporting to the police doesn't have much effect...I used to do that but they say I have to have proof and then take out a private prosecution..!! What a joke! Another example of how we in this country protect the guilty...What happened to being an upstanding citizen reporting arrogant, ignorant low-life criminals who, as you quite rightly say, their stand is “my phone call is more important than your life” I name and shame on 'Rate That Driver', it won't go any further as regards 'law enforcement but it makes me feel a bit better!!
04/06/11 Paul
-2

rivers who phone or text are

If they could see he was wobbling, why drive so close at speed?

A competent driver would have passed safely. The fact that they failed to do so indicates that they were driving too fast and were driving too close. As was admitted by one of the drivers.
04/06/11 rivers who phone or text are
-6

I looked at your first link, and from the descriptions by drivers, even those who were not involved but had seen the unfortunate cyclist earlier, it seems that he was wobbling all over the place and, sadly, caused his own death.

He was described by one driver as wobbling like a child just learning to ride a bike. It appears that he lost control of the bike and swerved into a car, bounced off and then was hit by another car.

Dwpotads; I just wanted clarification as your full name does not appear on the comments page.

If you are indeed referring to drivers who did not see someone because they were using a phone I agree with you; but sometimes pedestrians come out from between parked vehicles or cars come out of hidden junctions without looking and, of course, drivers cannot be looking in every direction at the same time.

Your first reply to me is facetious, in my opinion. When a driver says "he/she came out of nowhere" he means that someone suddenly appeared but the driver did not see where from.
04/06/11 grumpyoldwoman
7