I'd like to tell you about a speeding fine I have just received... by text message!  Let me first fill you in on the background, just to be clear, my gripe is with the system as a whole not the fact that I got a speeding fine.

I have been driving for over six years and up until six months ago had a squeaky clean license.  On my way to work there is a small uphill stretch where the road turns from single lane to two lanes.  This road is one way only and on either side there are empty fields.

Anyway, I received a letter through the post telling me I had been caught speeding up this particular stretch.  I was shocked to find that this road, which could be mistaken for a dual carriageway, was actually a 30mph zone and despite the fact I had not spotted the mobile speed trap, I admitted liability paid the £80 fine.  My license was "returned and duly endorsed".

Some time passed and in July 2007 another letter pops through the door.  I had been caught speeding again on the same stretch of road.  I couldn't believe it this had happened again and more importantly I still hadn't seen a speed trap anywhere.

The letter did not contain any evidence of the offence and to be quite honest used some rather nasty scare tactics to put the recipient off challenging it.  Again I signed the form and admitted liability - what else could I do?

Three months passed and I heard nothing.  Then, out of the blue this pack arrives through the door summoning me to court.  I sign the section indicating that I wished to plead guilty and sent it back with the next post. 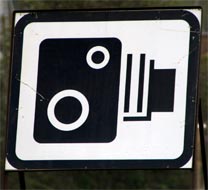 It is now only a couple of weeks until Christmas and I'm sitting at work when suddenly my phone beeps to let me know I have received a text message.  The message reads "HMCSyou were recently fined £258 please phone...."  Naturally, I rang the number provided and pointed out that I hadn't received anything in the post recently.

"It's not our responsibility, Royal Mail must have lost it" was the response I eventually got fobbed off with.  I asked why they don't send important documents like these by recorded delivery.

Apparently it'd be too expensive.  Ludicrous Im sure youll agree considering the harshness of my penalty, which included a £15 victim fee (don't even ask.).

In summary, I had to bend over and swallow a £258 fine, very close to Christmas for a six month old offence that I'm not even sure I committed?!  All this happened on a road that has a completely inappropriate speed limit in the first place.

Eskimo and Legal Eagle you are both wrong. OK you can get Legal Aid if you are poor and the state is trying to frame you up for a Criminal Offence. For a tremendous number of cases however there is now no legal aid available. This is especially the case with accidents and injuries (civil matters) Nowadays the route is No-Win No-Fee. The problem is that solicitors like to cherry-pick cases where they know that they are onto a winner. In actual fact it is slightly more complicated than that as they take out insurance which pays the costs if they loose. If they can't get the insurance all the bets are off. A friend has been lasered in the eyes and now has a medical report about the white dots (scars) on his retinas. 18 months down the line he's still getting the run-around in the UK and Strasbourg seems to be off the menu. Third world country I call it.
22/08/10 VMturbo
-13

Next time ask for the photos and the calibration certificate of the speed gun. Buy some photoblocker spray. Lots of people get scammed by faulty equipment or even police arm-pumping. These days any vehicle can be a speed trap, horseboxes, battered Transit vans etc. A common dodge is for them to park next to a garage or car sales lot where one little white van blends in with all the rest of the vehicles. A really nasty scam done recently involved an unmarked police motorcycle with video recording equipment. The officer was pursuing a speeding bike. Presumably the guy who was "winning" thought it was a race, no blue lights showing or anything. When the leading motorcycle visited a filling station the police waited in a lay-by until he came out again. More racing and more videoing with the police officer basically being an agent-provocateur - the motorcyclist could have easily been arrested at the filling station. The book was thrown at him with a 2 year ban but IMHO both motorcyclists should have been banned or slung in jail. Street racing by the police not showing blue lights or sirens is disgraceful - just look at their accident record. For an owned vehicle pursuit is totally unnecessary as the ticket can be sent through the post. Stolen vehicles are a different matter but often the THIEF who has been driving without insurance, and is speeding (60 in a 30 zone) plus running read lights, no driving licence etcetera is let off. This happened in Plymouth a year or two ago. Allegedly the judge said "Right, I'm now going to increase your three month suspended sentence to a six month suspended sentence" i.e. the "joyrider" was let off! By all accounts he had a good laugh as soon as he got outside the court. When decent people get fitted up £s£s£s for a couple of miles over the limit or a debatable tyre its not fair. Needless to say drug addict alcoholic joyriders never have any money so they cannot be used as cash-cows. Its the pits.
22/08/10 VMturbo
-2

I defended myself in Court and pleaded Not Guilty to an Aledged Speed fine and owing to my excellent driving record over 56 years the Magistrate handed down a Section 10 with No Conviction and No Costs.I asked what does that mean and he commented that it was just like it never happened.

Well 2 weeks later I found that I had lost 6 demerit points off my licence. NOTE: The Bill of Rights 1688, which is Constitutional Law in Australia, says "That grants and promises of fines and forfeitures of a particular person before conviction are illegal and void" ie: unless you have been judged by a jury and found guilty there is no conviction and the forfeiture is illegal.

Therefore how can the RTA get away with this illegal unreasonable practice. Answers Please.
09/10/08 Danny
1

Tsk Tsk Dave P..... ... What a great advert for the police service...... Thanks for simply confirming what we all knew... you lot just love to punish eh? Did you get picked on at school by any chance?. Then you'll be bleating in the pub about how the public don't like the force anymore (I hear this in my pub all the time)... just before you get in your cars and drive home... oooh guess thats ok though because you're trained drivers.
28/01/08 BarManager
-2

Dave P you are an arshole copper and I know I have to work with you idiots all the time, the only thing you muppets are good for these days is catching easy targets { Motorists ect} because crimials are to hard and costly to catch!!! oh yeah and they hate the paper work for real crims, much easier to send a fine with nearly 98% payment rate!!!
16/01/08 bogs
2

Never ever part with any private information about yourself or your affairs unnecessarily.

Wizard - what you are suggesting is very risky. Your mate may not have recieved a second letter as a summons is being issued under S172 of the Road Traffic Act.

If it was one of my cases, that's what will have happened.

Eskimo, you are out of date.

You cannot get free lagal aid for everything now. Minor motoring offences have been withdrwawn from the scheme.
23/12/07 Legal Eagle
-5

Hm, I'm afraid you've done something wrong if you thought you had to pay for a solicitor. In this country even the most guilty can get free representation at court - it's called legal aid. You just ask for it at the first hearing.
22/12/07 Eskimo
-8

I was recently Fined for speeding even though I know that I WAS NOT. So naturally enough, I pleaded NOT Guilty.
I was not able to afford a Solicitor because I have been off work for some time due to Ill health, so was forced to defend myself, and what a one sided farce that turned out to be.
Even though I am a qualified engineer, and also have a City and Guilds qualification in Computer Technology, the Magistrates ruled that I was NOT permitted to question any evidence on "technical grounds" because I was not suitably qualified. I objected that the principles I wanted to question were in any schoolboys O Level GCSE Geometry exam, I was still not allowed to question the evidence on echnical grounds.

I expressed my objections that I had not been allowed to present my case in a fair and balanced way, and was merely told that I could appeal if I wished (Yet more money to shell out) so I have been stuck with 6 points on my otherwise clean licence, for an offence I did not commit.

Always ask for the photos!! I also recommend http://pepipoo.com they are very good... I have been caught numerous times yet only paid the fine once! The harder you make life for these b@$t@rd$ the less they will bother you.

- When you recieve letter through the post do not reply, wait for the second letter; my mate has gotten away with ignoring his and they did not even send a second letter. If a certain amount of time goes by you will be beyond prosecution, I forget how long but Im sure its on http://pepipoo.com.

- If they send a second reply asking for evidence and to see the photos.

- If they refuse or provide the photos follow the steps on the http://pepipoo.com with the NIP Wizard etc.

Sure this isn't a scam - have you called the police and confirmed this with them? Don't call any numbers on the paperwork - find them elsewhere.
07/12/07 Bob
-21

"what else could I do?": Well next time you could get yourself over to http://pepipoo.com and get some advice before assuming the position. NIP Wizard first, forums second.
07/12/07 ViveLaRevolution
-5

Unbelievable! I'm not sure what it's like in the UK but here in Australia you can demand proof and if they cannot provide it and threaten you with higher penalties, you can take (in our case the RTA) to small claims court and you will win.
07/12/07 JetSetterJay
1