Plenty of people complain about drivers speeding, drink driving and tailgating etc.  But there are other types of driver; maybe not so obvious that are still a menace to the rest of us.

It's the slow driver who dithers along completely oblivious to anyone around him or her.  How many times have you encountered one of these on the motorway or on a winding A road?

Why do they do this when their car is more than capable of travelling at speed?

Also, I have noticed that people who drive powerful cars who tend to drive at least 10 mph under the speed limit at all times.  They then brake for a ridiculous of time when going into a corner, making you're journey both time consuming and frustrating.  Why do they do this when their car is more than capable of travelling at speed?  Of course having a powerful car doesn't mean you should race around everywhere and put people at risk! 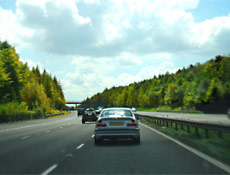 Another example of slow driving that can be dangerous is when people go onto the slip road of a motorway or dual carriageway; they pull into the main line of traffic nowhere near the speed limit causing all sorts of chaos.  This kind of driving could just as easily cause a serious accident in the same way as a speeding driver might taking careless risks.

The fact is accidents can just as easily be caused by slow drivers and this is specifically true of some old people, who in my opinion should have to retake their driving test.  Why do we need speed cameras to stop people speeding?  They need to sort out the old people who drive too slowly as well as the speeders!  I think these people are just as dangerous on the roads.  It's all very well targeting speeding motorists but I think drivers that go so slowly that they are a hazard should also be under the spotlight.

Let's have some common sense on the roads please.

GOW, Yes there are drivers driving well under the posted limits.
Yes, there are people on motorways clogging the middle lane, But, I'm talking about, 29 mph in a 30, 39 in a 40, 49 in a 50, and so on.
Yet we all see the MORONS that tail gate because they feel the Posted limits do not apply to them. These are the idiots that cause problems. As for the drivers that are too slow, (and usually very old people), Let's have a anual eye test, medical, and cognative awareness screening and not just them saying "I'm OK".
31/10/19 Guest
3

"Yes, and that slow driver is usually sticking within the speed limit." Apart from the large numbers who aren't.

I won't get into the fact that a lot of speed limits are set too low, but every time I go on a long journey I see dangerously slow drivers. They not only obey the speed limit, they knock another 5 or 10mph off "just to be on the safe side", totally oblivious to the queue building up behind them. Then there are the ones who clog up the middle lane of the motorway droning along at 40mph, even when there is nothing in the inside lane for about a half a mile ahead.
29/10/19 grumpyoldwoman
0

"Yes, this is completely true and drivers get quite worked up after being behind a slow driver"

Yes, and that slow driver is usually sticking within the speed limit. But the morons behind don't and that's what causes the crashes. Expect the unexpected, give yourself more time, but more importantly, stop being a total brainless speeding twat.
29/10/19 Guest
2

Yes, this is completely true and drivers get quite worked up after being behind a slow driver and when that driver is no longer in front, the annoyed driver tends to speed to get to the destination necessary in time, resulting in them being in an unsafe situation, which could possibly cause a vehicle crash.
21/10/19 LemonSorbet (WillMiller)
-1

REALLY dangerous driving IMHO - overly slow round corners, holding other drivers up, then flooring it on straights, effectively preventing or extending overtaking
27/04/17 Nic a char
2

This isn't the right gripe for this comment but there doesn't seem to be on about dangerous driving in general.

A news item states that there are about 80 hit and run incidents in London every week, resulting in about 20 pedestrian deaths and about half that number of other road users, every week.

It's contemptible that someone could do this and just drive away to avoid the consequences.

London's roads are being described as "lawless". There seems to be murders every week there. How can a global class of city be allowed to become so hostile and aggressive? A rich country like England should have a capital it can be proud of.

buying a car is stupid in the first place.
buy a house and you can get rental income on it.
what do you get from a car apart from its depreciation on a daily basis?
05/06/14 Dave
-2

Here on the A3(M) we face the same problem. I'm planning an overtaking manoveure and we were thinking about going out for the fast lane and slam on the anchors. However, I realize I can have my safety over in the middle and we can buy incredible fast cars for about £25,000 each if you know what you're looking for. Smart drivers waive the indicators (it's no-ones damn business where I'm going) if you bring in enough room. Many motorways here have half the middle lane empty on Sundays or Mondays so that helps a bit.
05/06/14 collar
-1

You car drivers should count yourselves lucky. Try having to slam on anchors in an 18 ton coach whilst granny dorris is going to the bog because some idiot is doing 40mph in lane 3 of the m25. Also with people traveling slowly in the slip lane and causing all sorts of carnage, the law states you must build up speed in the slip lane to match the main flow of traffic. People should be made to take a test to drive on a motorway.
05/06/14 Adam Mandy
1

Modern cars are geared to travel faster, as most are designed around autobhans and similar type roads. If you are stuck behind someone who insists upon adhering to the speed limits, then it is only due to the superioured brakings and handling of cars like the 'stang for example. I know, I am fortunate to own several, (nearly ten) but I am have worked jolly hard to pay for them.
08/09/13 craig b
-20

cornish ray : This is a British site. Could you respect that by writing in English, or even something resembling English, if you expect people to read and understand your witterings.
07/09/13 Friday Lunchtime
-15

Oh man, these @ssholes are a tad annoying. The other day I was queuing to come off of the interstate highway outta the Big sleazy and a guy nearly put a hurtin' on my sweet Lex'. Oh man he sure was lucky he did not, or I wouldda put a hurtin' on his @ss, an' I woudda pistol-whipped his @ass. This was actually in Bristol, the west end where all the crimes go off.
07/09/13 cornish ray
-25

I was coming back from town yesterday; there was a biker in front of me and we caught up with a driver doing 30mph. This is a road which until recently had a 60mph limit, it was reduced to 40mph for no apparent reason. It's a good A road, 60mph in good conditions is quite safe on some stretches.

So, this fine upstanding citizen was taking another 10mph off an already too low limit just to be on the safe side. Unfortunately there were no overtaking opportunities and the traffic was building up behind him/her.

Then, as we reached the right-hand turn off lane for the garden centre he/she nearly drove past the turn-off lane, then suddenly braked down to about 5mph, nearly causing the biker to crash, pulled over into the turn-off lane, and only then indicated to turn right!

Fortunately the rest of us managed to avoid a pile-up, but it could have been nasty.
06/09/13 grumpyoldwoman
-7