There is potentially a very bright future out there for personal transport that doesn't rely on petrol, diesel or chip fat to power the engine of your car.  So where is it and why are we not using it then?

Well the truth is people love their petrol engines because they're cheap (reliable?) and they don't cost much to buy or run.  Throw in the fact that alternative power sources for vehicles are expensive to buy, more complicated to refuel and generally are seen as inconvenient compared to the internal combustion engine.  You basically end up with a one horse race and we all troop off down to the nearest BP or Texaco to fill our tanks, swearing and complaining as we're forced to practically empty our wallets.

The oil companies and the retailers are happy, they've never had it so good.  The government is happy because they're raking in the fuel duty (see earlier gripe) and of course the car manufacturers are probably quite happy churning out new and ever more efficient (?) cars.  But are you happy with the way things are?  Do you get a warm fuzzy glow when you fill up at the petrol station in the morning, knowing full well you'll probably be paying even more for the same amount of fuel next week?  You probably don't think much about the pollution and CO2 emissions, but that's not what this gripe is about so we'll ignore that for now. 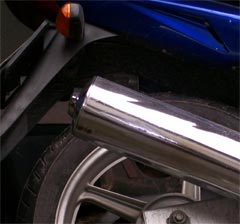 As I said earlier there are alternatives out there but people just aren't interested, either that or they just didn't know about it in the first place.  I can't in all honesty believe that the average consumer has deep enough pockets to go for an alternative option and there's also the fact that the infrastructure just isn't there never mind the cars.  Who wants an electric car that costs five times as much as a petrol car and only goes a fraction of the journey before needing a recharge?  Who wants a hydrogen or fuel cell car that you can't refuel at any old motorway service station?

Well it's coming, and one day you won't be able to run your car on petrol or diesel.  Maybe it will be a case of you can't afford to run it on petrol because it's too expensive.  These alternative power sources have slowly been evolving over whether we want them or not.  Battery and fuel cell technology for example has made a rapid amount of progress in the last few years.  More efficient motors, lighter and stronger car chassis, regenerative braking, ultra efficient solar cells and wind turbines for recharging at home.  All this and more is already out there and it keeps getting better and better.  Hybrid cars are a good start and could prove to be a good stepping stone to wean ourselves off oil once and for all.

If you're daily commute was less than 50 miles a day and you could by an alternatively powered vehicle complete with a renewable or cheaper means of recharging it.  If that same vehicle cost about the same as a petrol car, would you go for it in a heartbeat?  So let's talk about it, let's think about and and finally, let's do it!

Want to find out more?

Amped Bikes - this is a must see, very low cost easy to fit hub motors.  Check out the videos!

The last time someone found a cheap fuel that worked in a diesel the government put the price of cooking oil higher than diesel ,if we all went out and converted to LPG they would put an 80% tax on it , if we all out and bought electric cars your free road tax /free pass through congestion charging/emission zones would all go the name of the game here is tax revenue its nothing to do with clean air or tree hugging its about the money that's why they have Euro 6 its so strong VW could not sell their cars on performance and economy via the test so they cheated Euro 6 is point break for piston engines the idea of the regs is to trap the bulk of the vehicles in the emissions trap ensuring billions in revenues and emissions accociated parts /equipment and now urine which just about sums it up !
24/02/16 ferkemall
-1

You could just o2 a guy on YouTube has an engine running on it it works on compression same as a diesel ,but someone made it work for a car they would either get hit with a Mac truck or find out that an oil company is sitting on the patient !
24/02/16 ferkemall
-1

A guy on you tube has an engine running on o2 with the sparkplug disconnected chances are if it worked for a car engine they would find a way to tax it or outlaw it ,your best bet is LPG but then they hacked down the green allowance /taxes for that imaging if we all went out and bought either LPG or electric they would go broke in a week l

Oh not enough content to post what about a horse and cart ? No wait if we all did that they would require an mot on your rig like lights indicators tread on the tyres then there is the horse it would have to be fitted with an air intake meter that would be chargeable then you have the emissions it would require an emissions meter to measure the methane output along with tax insurance and mot you would better off with a car !

Sammi you might or might not have noticed that on some damp morning’s your car seems more powerful, that is the moisture in the air. It is possible to introduce steam into an internal combustion engine, prove it for your self. Put the spout of a boiling kettle close to the air intake of a static diesel, whilst it is running.
23/03/11 Boblet
-12

I completely agree with you, in fact i'm doing a project about what can we use instead on petrol, or if we can add anything to petrol so we still use some, but we reduce the quantity of it by adding another substance. I was wondering if you could help me.
03/11/09 Sammi
-4

About ten years ago I discovered a really fantastic alternative to petrol and diesel.My feet.I got rid of my polluting contraption otherwise known as a car,found employment within a half hours walk and have been perfectly content since.
30/06/09 Mike Pratt
-1

Why not live at the top of a steep hill. You could halve your petrol costs by going to work with the handbrake off, and only using the engine to go home(uphill)again. Presto! You only use fuel to do 1 journey! Or is this just a stupid idea?
09/05/09 Alistair Darling
-1

I have a 'dual fuel' car which runs on both petrol and LPG- the best car I've ever bought! Not only is it far more economical even when just run on petrol, but it cuts down road tax too. My only gripe with using LPG is that not many garages currently supply it. Perhaps if it was more widely available, and conversion cost less (it's currently around £2000), more people would choose gas...
09/03/09 Mallory
-5

Why has petrol prices not been reduced. At the price per barrel the pterol at the pumps should not be more £0.65 litre.

I'm running out of money f

OK how many people are still annoyed of the cost of trying to live and the pressure not being helped by the ever cost of fuel.

Could it be that the answer is for our government to force these fuel companies who are recording record profits (such as BP with their 6 Billion in 1 quarter), to use some of these profits to lower the cost of fuel production?

Why should we the people who are purchasing the fuel take up the strain when these companies have large amounts in the bank sat there.

Surely if all the companies off loaded say 5 million pounds each into the government's kitty to reduce the overall tax of fuel for all, those fat cats would still have plenty dosh to buy their cream for the morning coffee for their homes in the lakes and the US.

Also why are our government not forcing these companies to use their profits to research and produce these so called alternative fuels? If they were able to mass produce the next safe fuel cell car surely they would make more than billions because everyone would want one.

Is it time this government stuck its hand down the throats of these over powering "playground bulling" companies instead of the easier pray which are the public.
03/10/08 I'm running out of money f
2

Once again it's the something for nothing brigade at work again. Doesn't anyone teach the first law of thermodynamics anymore?

How much energy is required to separate Hydrogen from Oxygen electrolytically?

Recently, I've come across several web sites advocating the addition of a "kit" to the engine of your car, that will enable it to get higher MPG, burn cleaner and decrease the C02 emissions quite considerably.

WAIT! - wait - you do not actually add water to your petrol tank . . no, no. It goes into a 1 litre "bottle" and by means of a connection to your battery, baking soda (added to the water) and various pipes and hoses - hydrogen is leeched out of the water, and then added (via more pipes) to the engine.

A 1 litre bottle of water will last (they reckon, some 900 miles, as the hydrogen extracted is huge). It is quoted on the sites, that MPG is often improved by as much as 77%, in some cases, (lorries too).

What I'd like to know - is . . . has any one actually added one of these kits to their car? Only I'd love to do it and help "save" the planet, save some money and extend the life of my engine at the same time. BUT . . . I'd really like to know it works first (wouldn't we all).

By the way - what I've outlined above, is only a very basic taste of the idea. You need the full plans (which you buy from the web site) before getting it right. So don't try it on the info above - from what I gather, there's more to it than that, and I haven't gone as far as buying the plans . .. yet!!
30/06/08 petralava
0

Sounds good to me, but will the lords of the manor also provide us peasants with a reasonable broadband connection? I couldn't possibly go back to a dial-up!
24/06/08 Plod
5

Why do cheap batteries not last very long?

Loss of power on my VW Golf when overtaking