Isn't it annoying when you buy some cheap batteries to use in something such as an electric toothbrush or your optical mouse; you use it for a few days then suddenly, it just stops?  You then discover that those inexpensive batteries you decided to use recently really aren't up to it.

I have found that this usually happens when you buy the really cheap ones, for example the strips of 20 or 30 batteries that you can pick up for a couple of quid down the market.  You could arguably say, what else do you expect for that price, but I just don't see the point in selling batteries in bulk and cheaply when they hardly last any time at all.  I suppose theyre okay for things that don't use much power such as a remote control or maybe a wall clock.  Don't even think about using them in something with any sort of motor or light though because they just won't last five minutes. 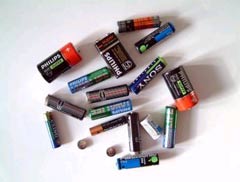 This is probably a classic case of you get what you pay for.  From now on Ill be sticking to the familiar trusty old branded batteries such as Duracell or Ever Ready.  They cost quite a bit more than the unbranded cheap stuff from the market, but at least you know they will last.  In fact, I noticed that when I changed to Duracell on my electric toothbrush, it had a whole lot more oomph than with the cheap batteries.  It remains to be seen how long they will last, but Im pretty sure that at least I won't have to change them before the weekend.

With Christmas just around the corner, heres some good advice.  Don't be tempted into buying strips of cheap batteries from the market for the kids toys.  Get some decen't ones that are guaranteed to last because little Johnny won't be too happy when his flashing laser gun doesn't make it to the 100th showing of the Wizard of Oz!

The History of Batteries - If you ever wanted to know what batteries are made of and how they came about there's a timeline here and a wealth of knowlege.

Dead and Buried -. China does produce crap. Western firms are buying it at levels that will only purchase crap. We the consumer are buying it at normal prices because we did not realise what was going on. The blame lies fairly & squarely on British business using time honoured quality name labels stuck on to this crap. The British public have been conned by British business importing Chinese crap. Is that clear & concise enough?
20/06/14 boblet
0

It's quite funny that you guys are blaming China for producing crap products. China is just a factory. Don't forget it was your home grown fat cat company directors of Poundlands and HomeBargains etc that ordered cheap crap to be shipped from China in the first place! You are as good as blaming a war on mercenaries instead of warlords.
20/06/14 Dead and Buried
0

Its getting worse - even the major aircraft builders Boeing and Airbus are working towards China building the components and eventually the Aircrafts to reduce costs.

The result will be that the west can no longer afford to buy and won't be able to build because all skills will re-locate and this is across all industry.

China is now opening banks in the city to trade and learn how to trade globally, and this will be at the expense of the UK banking system. In the end years from now we will be the cheap labour markets for India and China.

If I see made in China on a battery I do not buy it. I was amazed to see "Made in China" on a Kodak battery. "Made in China" on a Dell computer, Clark shoes are "Made in China". We are paying whilst Chinese firms perfect their act using western know how. Once they get it right, prices will go up. British retail will then look elsewhere, in their constant search for cheap crap, to sate their insatiable appetite for profit. I would love to read a comment from any British retailer that imports from China. However I will not hold my breath.
18/06/14 boblet
0

Ha Ha No wonder this country is going to the dogs. With batteries like these, who needs duracell.

Somehow, I think the "Know it all " on here knows nothing at all, and is just a fool.and more than likely, just THINK they know.

Is it a requirement under EU regulations that shops selling batteries state the milliampere hourage of their capacity of electrical power and energy?

Poundland does not sell its cheap batteries with this labelling.

Are they breaking the law?

What punishments can the manager of the store expect when they allow this to happen?
17/06/14 EU Law
0

Come on though, be honest nicky, the batteries in that ebay shop are not expensive. quite the opposite. my local co-op has got duracell ultras on SALE at the moment £3.99 for a pack of 4 aa or aaa. that shop is selling packs of 8 for the same price.
28/01/11 gamer
-4

Hmmm yes how can they always have good deals on batteries when their feedback is on zero meaning they have never sold anything, looking for a bit of free advertising are you? I wouldnt bother your batteries are far too expensive anyway.
23/01/11 nicky
-15

I bought some cheap batteries for my razor. But never again. They lasted for about half a shave and went dead . I replaced tham with some Duracell ones. Remember the add on the telly about how long they last ? Took it with a pinch of salt. But it is true , they go on and on.

I shaved every day for two weeks before they needed replacing . You get what you pay for.
23/05/08 Rupert
1

The cost of a set of rechargeable batteries and charger will pay for itself after just three or four discharge/recharge cycles. Pound for pound it could be the best investment you ever made, and it is better for the environment too.
15/05/08 MikeP
4

Cheap batteries aren't as good as expensive ones, d'oh.
Maybe you should save your pennies and buy a decent set of batteries for your needs, there are many guidelines, depending on the power usage of your equipment. I have found that the fairly cheap (£1 for 6 AA) work well enought for tv remote controls etc, but for something like a digital camera alkaline (Duracell or the like) is the way to go.
15/05/08 OldGeezer
1

Hello of course they dont last as long thats why they are cheaper. What do you expect them to last as long as expensive ones. You are funny. !!
21/04/08 Wise one.
-8

Use rechargeable batteries, they wont run as long as a Duracell, but in the long run you save £££££s. Both Aldi and Lidl do both batteries and chargers at a very reasonable cost, and I get good life from them.
24/02/08 Titewad
3