Everybody seems to be moaning about the prices of petrol these days and why not?  Especially as Shell and BP have just announced profits of over 7 billion pounds between them in the first three months of the year.  Their shares are soaring too and one could perhaps be left feeling a little peeved when you filling up your car in the forecourt.

Personally I've never seen petrol prices this high and I can remember a few months back when we balked at the prospect of paying anything over a pound for a litre of unleaded petrol.  If you can find your fuel that cheap now you're really doing quite well because it's averaging around £1.08 at the moment.  I've seen some places selling it at £1.12 and more.  But who's really to blame in all this?  Is it the oil producers, the oil companies or is it the retailers?

Well I suspect all of the above to some degree.  Costs have to be met and of course the good old laws of supply and demand kick in and when supplies are erratic (as they are in some areas right now), then of course the price increases get passed for the most part on to the consumer (that's you and me in the forecourt).  However there's one large and and very difficult to ignore portion of the real cost of a litre of petrol.  That would be the Fuel Duty, Petrol Tax, Gas Tax.. call it what you.  Of course there's the VAT that's added on as well.  All of which goes straight to the government every time you fill up. 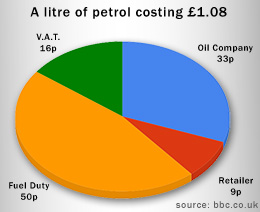 In fact more than half of the cash you hand over to the retailer goes back to the government.  Still feeling resentful towards the oil companies and retailers?

The greens would have you believe that the fuel duty should be even higher because that's the only way to convince motorists to use less petrol and respect the environment etc.  Well that isn't exactly going to be a vote winner now is it?  Especially as we're sliding towards a recession and most people are already starting to feel the pinch thanks to over inflated house prices, price hikes for food, alcohol, cigarettes and other goods.  Then there's all the various forms of tax, some quite obvious and others not quite so transparent!  Can we really go on swallowing one price increase after another for our fuel knowing full well that most of it goes to the government, especially as there quite often isn't a viable alternative to taking the car.  Just check out the bus timetable or the cost of buying a train ticket if you don't believe me.

It's about time things changed.  Either cut the duty on fuel to a sensible level and/or invest in better public transport and alternative non petroleum-consuming technology.  Ideally a bit of both because we will need to free ourselves from the dependency on oil eventually, and probably more importantly as far as the government is concerned, Joe Public won't have forgotten how much lighter his wallet is when the time comes to go and vote.

Or use a bicycle instead, of course. When I look around and see people driving alone in big cars, speeding, screeching away from the lights then I know fuel just isn't expensive enough. I started out just making short journeys on my bike but found it so easy I gradually expanded my distances. Now I am looking at selling my car and using taxis if necessary because I use it so little. I am very intelligent of course so have made the change while those of little brainpower will just sit in long queues of traffic getting fat and whingeing.
08/06/11 Fred E
-19

"Fuel duty is way too high" - what exactly does this mean? - relative to what?
We have to get real - oil reserves are diminishing, those that remain are more expensive to obtain. We are facing an over-population crisis - more people means more demand.
As a nation the less reliant we are on foreign oil the better and if higher taxation is a means to achieve this, then so be it.
The clever people do not whinge, but simply adapt - drive a smaller car, move closer to your place of work, drive slower, lift share...
07/06/11 J man
-10

It should be noted that since the article was published a litre of unleaded ranges from £1.30 to £1.45 across the UK and the UK Government still gets the same percentage so their revenue has increased substantially. Perhaps then their proposed cuts, which I have to agree with, will not be as sever or for as long as proposed. However - we all pay for it some way or another but in the longer term fuel duty shooud be cut by at least 30%.
01/06/11 GMM1965
7

Look at it my way, Fuel at £10 a gallon and I'll be able to drive my gas guzzling 4x4 in peace whilst smoking my big fat Cohiba cause most of you little people will be out of my way.
23/02/11 loads of dosh
26

My daily petrol cost to get to work and back was about £8 a couple of years ago, now it is more like £12. I've not had a pay rise in that period as I am salaried; my hourly paid colleagues have had raises to keep in line with increases in the minimum wage.
If that's not bad enough the mileage allowance I get from my employer if I have to travel to meetings, etc, remains at 35p a mile, the same it has been for years.
Driving used to be fun but now, for many people, it's a necessity - and a costly one.
04/02/11 Ken
-12

Ha ha ha ha,we are all fools,we work our asses off for sweet fa.oh no not for that but o keep the rich,when is this going to stop,road tax used to be for the weight of our vehicles,now it seems to be for our emissions,extortionate !!!! high insurance but that always has been high,fuel cost and the tax on carparts STEALTH TAX are we all stupid for paying this?,yes we are,isn't it about time it came to an end,WILL SOMEONE PLEASE DO SOMETHNG ABOUT THIS PLEASE PLEASE PLEASE
03/02/11 simon
1

Fuel duty is definitely too high and will result in a huge loss of jobs if it is allowed to inflate prices further.
29/01/11 AdrianH
6

I was looking at the vote above for visitors views on what should happen to fuel duty, who are the lunatics of which there are 11.6 % who voted for it to go up? Bunch of gleenogs!!
18/01/11 Gordon BrownArse
6

The website is blocked off I think they got to it and slammed it onto the ground probably put owner in dungeon or something...
28/12/10 toaster metalic object
-14

this is what its come to then?

lets see, put down paye taxes and put up fuel duty, how about they put up paye tax and NI and all the other taxes, and also put up duty on fuel 4 times a year while allowing more overseas workers to come in and take the jobs away from you so that they can earn the money, pop into the bank and send most of it to their home bank account for later when they bail out home and start their own business then go down the pub and speak about how lazy you are because the companies here now refuse to give you a job in favour of a cheaper and far more obedient/submissive group of people who put up with bad treatment and rates well below what the going rate of pay should be.
They will say that this is in line with "key" environmental obligations and commitments for a better future "aww its for the baby" then put up the fuel duty again....pretty soon they are going to make us drive on the other side and change to 2 pin sockets anyway to suit the incomers.
The banks have signs in Russian and other eastern languages and I wouldnt be surprised to see TV adverts going that way soon, and sections of the newspapers.
11/03/10 this is what its come to then?
1

£1.10 per litre (a.k.a. £5 per gallon) by Chrimbo 09!? Disgusting! Won't be long now before driving will be only for the rich/well off! Maybe that's what the greedy "expenses" MP's want so they can have clear motorways to hammer along in their Jags and Mercs without poor ol' Joe and Jane Bloggs getting in the way in their 1 litre ecoboxes.
20/11/09 Disgusted of Didcot
2

Put loads more tax on fuel, and the amount raised take off PAYE contributions, at least that way, all the tax avoiders will be paying some tax. (and there are loads of them).
09/10/09 Gainsborough lad.
-20

NO TAX PER MILE, the government wont do this as it would take unnessasery work off the post offices, the tax-disc printers, DVLA wasterers, and all the other people clinging on to this outdated form of showing that you have insurance and mot's, the police now have connected number-plate recognition systms to a national network of cameras, not to mention all the mobile detecters in the squad cars. just a ploy to keep "civil servants" in comfortable work with comfortable pensions.
25/08/09 Gainsborough lad.
7

A problem with increasing tax on fuel is that it would unfairly penalise people such as rural dwellers who are unable to use public transport and have no option but to use cars.

Another problem is that this would also lead to increases in the cost of most goods and services due to the very high dependance on road transport by almost every sector of the economy.
25/08/09 Manx Hound
-20

Where are the alternatives to petrol and diesel?