I read in the news recently that oil giant BP has unveiled record first-half profits on the back of rising world demand for oil.  The price of petrol at the pump is climbing through the roof and yet they still have to rub our faces in it with this announcement.  In the headlines today it was reported that the cost of a barrel of crude oil is above $65 for the first time on record.  What will BP do now?  Will they announce a windfall for their shareholders just to rub salt into the wounds?

It just makes my blood boil, because every other day on the way to work when I stop for petrol, I see yet again that the price of fuel has crept up a little.  We know that demand for oil has increased due to developing countries.  We also know that there are supply problems because of wars and natural events and therefore expect price increases from time to time.  We do not appreciate however, the major oil companies such as BP, Shell, Texaco and Esso etc... flaunting their bloated profits right in front of us whilst the price of petrol is going up at the pumps. 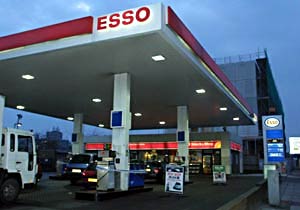 price of petrol going up... makes us resentful

That kind of thing makes the public very resentful, and fuel protests of 2000 showed that we are more than capable of making them sit up and take notice if we have to.

Oh and let us not forget the cut our government gets in the form of fuel tax!  We dont see them stepping in to help us out do we?

If they actually took all that money and ploughed it into researching alternative forms of energy such as hydrogen storage or fuel cells, it would be quite acceptable.  I get the feeling that it is being squandered somewhere else instead though.

When the price of oil goes up, petrol prices go up...

The bottom line is, when the price of oil goes up, petrol prices go up, so too does the cost of living.  It costs more to manufacture and transport goods, so industry tends to naturally pass that on to you and me, the consumer!  Because of our dependence on oil were slowly being squeezed from all directions.

Thanks to the greed of the major oil companies, not forgetting of course our money grubbing government; we work hard to earn a living so that we can line the pockets of some fat cat scoundrels who are busy telling us how much money they have made out of us!

Theres absolutely no justice anymore. So maybe it's time for blockades at the refinery and go-slow convoys on the motorway again.

Some sites that may be of interest

Ways of cutting the cost of petrol
With the price of petrol rising due to volatile oil prices here are some tips to help you keep a rein on your monthly fuel budget.  Remember it's not just about cheaper petrol, it's about using less, making it go further or not using the car at all.

I have an Astra 1.9 CDTI, and have been having trouble with it for the past 12 months, found out yesterday speaking to a specialist car parts dealer that it was the supermarket fuel that we had been using. He said that he had had hundreds of people with the same problem. I have used TESCO fuel in the past and the car ended up in the garage, luckily it was still under warranty, I have been using MORRISON'S fuel as we have only supermarket fuel stations in our area didn't think this was as bad, was I wrong. He reccommended using an additive to help clean the turbo etc and only use fuel from a desent garage(Shell, BP etc) I will now have to go out of my way to do this. I think it is disgusting that we are paying £1.39.9 a litre from the supermarket fuel stations and it damages your car as well!! If you have a high performance diesel, DON'T TOUCH SUPERMARKET FUEL WITH A BARGE POLE!! it will wreck your car. I never knew this until yesterday, so please spread the word!!!!!
11/08/12 CORNISHBABE
2

Fred E, I have just been reading some of your past posts and realize that you are a bike rider and do not own a car. In saying that, I must agree with most of what you say about cars. My point was regarding the high level of fuel prices in the UK and if these will ever be reduced?
28/03/12 Jethro
-3

Fred E,"when you work out how much people spend on their cars fuel is a small proportion"
Are you serious?
28/03/12 Jethro
1

Surely if the roads are overcrowded and in a terrible state of repair you would want less car usage rather than more? I don't really see many signs of people modifying their behaviour and using less fuel because of high prices but I do hear lots of moaning. From what I hear people are good at bleeding themselves. The number of people who tell me it is sensible to buy new cars every three years on various loans, leases etc when you work out how much people spend on their cars fuel is a small proportion. I do see quite a few motorists who would benefit from a bit of starving - I was only thinking the other day you don't see many slim taxi drivers.
27/03/12 Fred E
-1

The British have a love affair with their cars, the goverment knows this, so do the oil companies. The UK's road are overcrowded and in a terrible state of repair. So,may I ask, do people think for one moment that the price of fuel will drop, or will this administration continue to bleed the motorist knowing that drivers would rather starve than give up their "precious".
27/03/12 Jethro
4

I have just noticed that oil prices are now the same as 1 year ago. USD exchange rate is the same yet we are paying still paying £1.35 at the pumps and a year ago it was about £1.15. How does that work. Has the government sneaked in some more tax or are we being ripped off as usual ?
04/10/11 Rover
-9

All I hear is haulage companies bleating about their running costs and the price of diesel, but when I drive the M6 every other vehicle is a lorry. They keep whining that their industy is on the point of collapse unless the government gives them special treatment over fuel, I say increase the price and lets see less traffic on the roads. Too many people in this country what more, more, more.
15/06/11 Treehugger
-6

I think the increase in fuel duty and increasing insurance costs has had a beneficial effect in reducing motor vehicle usage. Previous projections of traffic usage indicated our roads would soon be gridlocked whereas at least where I live the roads seem to be a little quieter now. The M6 toll road is carrying approx half the vehicle numbers projected. It unfortunately means the rich can do whatever they want while the poor are restricted but all other suggestions for road charging are so resisted by the public that high fuel duty seems to be the best way. I would go one step further and say abolish vehicle tax and put the cost onto fuel.
15/06/11 Fred E
-4

I find it beyond irritating that petrol stations have to make the price ***.9p everywhere - because we are all too stupid to realise the actual price.

Largely arbitary anyway since motorists have pretty much no choice.

People, people face facts, please.
Yes, the greatest proportion of the fuel price is tax, but you must ask why and address that.
We, as a nation, appear to be sending aid to every other country on the planet and are involved in two dubious & expensive wars. We are the dumping ground for Europe's dross that we now seem obliged to take in and then have to support them financially. This all costs money, a lot of money and what is a soft target? - fuel.
There is no point in whingeing - write to your MP and complain about the root cause.
14/06/11 J man
4

The Price a Petrol is dropping like a brick in the USA, over 50 cents a gallon has come off the price in last 4 weeks, so why not England. Who is fixing the price to make us pay more in RIP OFF UK
14/06/11 Terenceclg
1

Also, before someone says that I should buy a smaller car and it be more economical, dont, I have just srapped my car because I cant aford the petrol and rising insurance. its now taking me an hour to get to work and back on a push bike. It maybe a nice summers day now but im not looking forward to winter. I am still feeling the pinch in rising fuel prices cause it causes inflation which I notice all the time when I pay my bills and weekly shopping. We need to act now before no one can afford to pay for anything in this country.
01/05/11 Ex-Rover 400 Man
-2

Yeah MMG Cameron's too busy with faffing around with his suit for that damn wedding tomorrow to worry about the likes of Mr Average!
28/04/11 pjincs
-6

Where are the alternatives to petrol and diesel?