I have owned the car since new and always had Volkswagen carry out all servicing and maintenance.  I have the same old loss of power problem reported by others.  It has recently been loosing power whenever it gets up to 70 mph in 4th or 5th gear, usually when overtaking.

Do these symptoms sound famliar?

Add your comments to the discussion forum

If engine switched off and on again, it goes back to normal (until next time).  The car has also suffered from serious problems starting when cold (Usually takes 20-30 seconds!)  The fault started shortly after a regular service at the Volkswagen garage.  It has been back and they replaced air mass meter (which I paid for).  Unfortunately this did not solve the problem.  They then replaced the air mass meter again with a different one - still no good.

the dealer admitted that they didn't know what the problem was or how to solve it...

The next likely candidate for the problems was a solenoid valve on the exhaust flow.  That didn't fix the problems either.  Next they tried another electronic sensor linked to air mass meter.  Guess what?  Still the same problems! 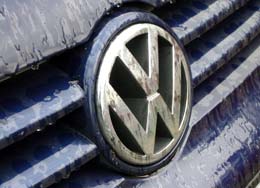 They did a full day diagnostic on the turbo and said there were no faults there and that it performed well.  In total there were seven opportunities to fix the fault and they failed every time.  I even drove it to the garage in this state for them to plug in the VW computer which again identified a fault which had already been dealt with twice before.

The dealer admitted that in all honesty, they didn't know what the problem was or how to solve it.  He said I wouldn't have to pay for the further work since they hadn't resolved the problem.

I have now put up with this crappy VW Golf for 3 months and learned to never try overtaking.  Out of the blue I received a bill for nearly 500 on top of the first bill for unnecessary work.  Lesson - My VW Golf 1.9 GT TDI (110) is a pile of rubbish.  DON'T believe people when they praise their Volkswagen Golf!  The car is too complicated even for their "so called" experts to fix and parts and labour are stupidly expensive.

I am going back to my Ford Escort - 230K miles and still going strong; oh and cheap to run with the advantage that I can fix it myself if it goes wrong.

It is time some of the clowns at VW HQ get their heads round fixing real problems instead of doing their best to circumvent the emission regs and that too very badly as they got caught doing it.
The fact is there is an unholy relationship of too much friendships and insufficient independence of enquiry of manufacturers actions and submissions WHICH IS WELL AND TRULY COUPLED WITH PATHETIC MANAGEMENT SUPERVISION, AS it is hard to believe so few knew about the software manipulation to meet emission standards.

Now the company should be legally compelled to pay the equivalent of all profits so amassed until the beggars were caught out. This will never happen due to corrupt govt. practices in many countries. But US customers will get a fair shake of the money pot as they did with the BP oil spill disaster in their South East coast.
06/11/16 Cynical TRUTH
1

firstly ,clean inlet manifold,this can be done with special fluid you nee to run engine to prevent damage,
then you need to look at air flow values,a cable and laptop needed.
at the same time all other parameters are easily read .
if for any reason the wastegate does dot open or variable turbo does not adjust high boost triggers a limp mode.
so this would follow a burst of good acceleration...
this is easily remedied ,if no luch with dealership get it chipped and ban limp mode...
29/09/15 nalaver
-1

I've had exact same problem and similar responses from garages. I've now located the problem which is the N75 valve; the turbo is fine but it is this valve that assumes the car is over-boosting once you hit 70mph hence it limits the power. Once this is changed it should fix the problem and your speed should return. Most mechanics will pass it off as turbo when in reality it's a little valve which costs around £35. Try this as your problem sounds exactly like the one I was having.
11/09/14 VW GOlf
-1

Dead and Buried.
You have dredged up an age old Myth. There is not one single instance where a German product, or anything else for that matter is superior to a British product, in a similar price range. However that was not my point. The point I attempted to make, the one that went over your head. The one where I chose not to criticise German "Heath Robertson" Engineering methods. In answering Anonymous. I drew attention to the after sales situation, The fact that a letter of complaint in English, as opposed to French or German, in my opinion was more potent.
17/07/14 boblet
0

The answer is the same one that has always applied "Anonymous", buy British. The car built in Britain gives you access to a superior dealership network. A letter to Ford or Vauxhall can also work wonders. A letter in English to a French manufacture brings only laughter.
17/07/14 boblet
0

Hello...please read on...Im the new owner of an SW 307 Peugeot. Recently i had similar faults with turbo issues. I returned my vehicle to the dealership due to the car pulling back all the time. They checked it & said there's a pressure unit problem. They changed a solenoid and guess what? I lost complete power, i was devastated. This problem has now been going on for 3 months, the garage are not prepared to negotiate, leaving me to deal with this solely on my own, what a disgrace. Since then i have booked my car in with a Peugeot expert for diagnosis, and the faults were showing Turbo & EGR valve concerns. Next stage booked Peugeot in to fit new turbo and still no power!!! Please can anyone Help???? Much appreciated.
17/07/14 Anonymous
0

My 2002 (from new) Seat Leon 1.9 TDi (145k) has had all the usual Leon faults (leaky doors, leaking rear washer, broken boot switch, and turbo loss on acceleration). Over time I have fixed all problems and as for the turbo (still the same one) I now believe the problem (in my case) has been due to dirt in the system. I was also having issues with the ABS light coming up on dash (only lost traction tho) and my local garage couldn't find the problem (via diagnostics code) apart from an 'unexplained' code that suggested there was a fueling problem? The car seemed to be running fine however? They couldn't explain why the ABS error would come on if it was a fueling issue? Until a few months ago this ABS fault was a regular problem (ignition on/off to reset) but I changed oil, bought some 'forte' turbo cleaner followed (separated by tank filling) by 'forte' fuel cleaner and then some (unusually) hard acceleration for a week and this ABS fault has miraculously gone away! As the car is now running perfectly after this (relatively low cost) action, I would recommend other readers try this before getting too commited with your local garage and the subsequent sensor/fault code hassles.
02/06/14 Mark
0

Purchased my Brand new Audi A4 Avant 177 Tdi Black Edition in March 2013 my 3rd consecutive Audi. During 12 months of ownership it has been off the road in excess of 2 months for 4 new seat frames, new clutch &amp; DMF @ 3,000 miles, new brakes to cure a &quot;clunking&quot; noise in reverse, front suspension creaks and misaligned fuel flap and bonnet!....customer service from both Audi dealer and head office has been nothing short of appalling!....goodbye Audi!!
05/05/14 Anonymous
1

I own a 2012 VW Golf with the 7 speed DSG . My car has failed twice now with a loss of power. VW refuses to do anything about it and I have been forced to sue them. VW want me to continue to drive my car around at my own risk until it happens again. This is so dangerous and not good enough. VW has recalled 2008 to Sept 2011 models and 2013 models the 7 speed DSG for loss of power problems but are in denail about the same problem occuring in its 2012 models. This is a disgrace with VW putting its corporate profits and brand before customer safety. Others have had the same issue. Let me know if you have a 2012 7 speed DSG model that has lost power. I am concerned about the saftey of other VW owners if this issue remains a secret. I am being encouraged to start a class action.
14/01/14 Robert
-2

Three things to look out for,, yes mass airflow meter is a big yes but make sure you get the better quality one as in from V W, the next thing is make sure every vacuum hose/pipe that is connected to a multitude of electronic/mechanical valves as I had checked at least five times and still missed one that was broken, it sits under a hose on the cam belt side and you just can't see it from above. The next problem is the waste gate sticks on the turbo and the same problem is found on the E G R Valve they will need cleaning. Anyway it always starts with the Mass Air Flower meter being faulty and they came out of the factory like that as the little resister in the meter just falls out and you can't see it anywhere, it was never fixed properly from day one. I have used a non genuine Mass Airflow Meter and they do work fine so its up to you if the budget is limited, do not use second hand ones they can be faulty. Another thing...after you have replaced any of these parts beware you will have to take the car for a good run at least 50 miles so everything resets it self and the E C U has time to correct it's self but only if you are sure the problem has been resolved.
27/12/13 Les
-6

try to change ur injector O ring n see what happen cause they become hard n leaking fuel in injector n check ur injection quantity in block 13 in engine via VCDS -+0.5 is ok more than this u have to replace ur fuel injectors. i have same problem on my skoda superb 2.0 pd 2009
28/10/13 Deepak
-17

Fed up with my unreliable VW Golf

My car came back worse than when it went in

Car problems caused by bad service from a garage