I had been recommended a great location for a walk by a friend, around Dell Quay near Chichester, and was also pleased to find a pub at this location the "Crown and Anchor" where we decided to treat ourselves to lunch.  After perusing the pub menu my wife and I decided to share a 'Sausage Platter- more than enough for two', priced at £11.95.  We were greatly looking forward to our food coming as it had been advertised as coming with crusty bread, chips and mustards (remember, plenty for 2 people!!).

large platter - we were a little underwhelmed

Expecting a reasonably large platter we were a little underwhelmed when the waitress came towards our table carrying what looked like a very small breadboard with two mini bowls on, along with a jar of mustard and one, yes, ONE slice of bread (no butter) chopped in half (perhaps to make it look like more than it was!?).  In one of the bowls was about 12 chips and in the other was around 8 bite sized bits of sausage.  So...  We asked if we could have some butter, which was brought out in a bowl the same size as the one the chips and sausage was in- that'll give you an idea of the scale of bowls.  I was silently fuming... 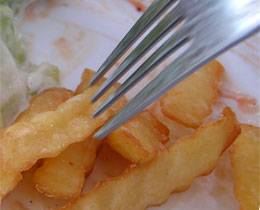 I asked for some tomato sauce and a bottle was brought to the table. When applied liberally into the chip bowl it became apparent it had the flavour of MILDEW!  To say we were more than a little disappointed is an understatement.

To this day I'm annoyed with myself for not complaining at the time, but we just wanted to carry on with our day without a confrontation and so left it.  Besides, the landlady who appeared in and out of the bar appeared rather bullish and rude so we didn't fancy taking her on!!  But by anyone's standards £11.95 for that is taking the right mickey in my opinion.  This 'big enough to feed two' platter in would barely feed a child let alone two adults.

On the up side, the bar staff and waitressing staff were very pleasant and polite, and it would be a nice place for a drink but beware poor value food pricing (and that landlady!!).

The menu should state exactly what the food contains nutritionally: grammes of protein, calories, vitamins etc.

Sulia, Yes, I remember you, thanks for pledging not to come back, we have a policy that snobs are not welcome!
24/07/12 The manager
-5

We, that is my husband, myself and my mother-in-law recently visited a pub under new management. The welcome was smarmy to say the least (given that I am on the wrong side of 55 and m-i-l is in her late 80s) We were greeted by the manager saying to my husband "What a fortunate gentleman to have two such beautiful ladies with him" Oh for heavens sake!

The food was mediocre, the steak overcooked, the portions too large, and the price too high....we won't be going back....a word to the wise, smarm don't work, good food well cooked and decent prices combined with cheerful and attentive staff who don't slobber all over you and breathe down your neck works!

Live for £5 per week

Well if it says "big enough to feed two" on the board, then it should be BIG ENOUGH to feed two? If it isn't then they should advertise it with something more appropriate such as "slightly bigger portion, enough to feed a doormouse". Don't you think that we're lied to enough already without unscrupulous business owners doing it as well? Time for trading standards to take a peek perhaps.
11/01/11 AOD
-12

Doesn't it occur to any of you guys that "big enough for two" is a deliberate exaggeration to emphasise a generous portion rather than to say that its a portion to share?
11/01/11 Moronicus
-23

You should complain there and then. If it says "big enough to feed two" then you should get a plate big enough to feed two. Some people have more money than sense and if they have money to throw away then let them. BigD you obviously fit that category! We're all tightening our belts and should demand value for money.
09/01/11 AOD
-13

"still hungry" you were just being a greedy bargain hunting git and got what you deserved. The "lets share the plate with a jug of water" brigade do my head in.
09/01/11 Big D
-15

Serves you right for not complaining at the appropriate time.This is just typical of the British must'nt grumble attitude.Don't be ripped off.Tell them what to do with their rotten food.
13/08/10 Hobsons Choice
-14

I would consider this as a genuine complaint, after visiting the establishment myself I was
warned off the place by a friend who has a caravan in Bracklesham and should have taken
their advice and gave it a miss, but as they say curiosity kills the cat I believe, but must agree
the waiting staff where pleasant.
30/07/10 thatcham tony
7

"Aussies and Americans complain they do it effectively and achieve a result, which is why customer service is good in those countries.... "

You have GOT to be kidding. Australian service is possibly the worst anywhere in the developed world. We haven't a clue how to do service and even less idea how to handle a complaint. Clearly MikeP has never been to Australia, or if he has, he had a very unusual experience whilst here.
24/07/10 Skippimite
-7

Yes, been there, done that, many times. In fact, it is so commonplace now, that I ask, quite bluntly before I order anything, and if there is any hint of this miserly and unneccesary practice, I leave. Restaurant owners do not need to scrimp like this, the profit on food is plentiful. But this has become the great British dining rip-off and the cunning restaurateurs and pub landlords are creaming it in, thanks to TV chefs and the 'fine-dining' fad of the wealthy. We have been caught because, like you and everyone else, we don't want to spoil our day or evening (or anyone else's closeby) by making a fuss. So they get away with it, again and again, 'stiff upper lip' and all that. So if I do get 'caught', here's what I do: I get online to TripAdvisor.com and rant as much as I want. At least then, other people can read the warnings/comments BEFORE they decide to go to these places. It may not be getting back at them directly, but at least it gets things off your chest and dissipates the fuming.
24/07/10 Stavanger9
-7

I consider supermarkets Cafes are serving abismal food at times; take today I got a sausage roll, beans and chips a pot of tea and a trifle.

The sausage roll was hard and the beans had a skin on them and the chips were underdone; I was very hungry so I ate it; it was edible but you could tell that care and attention is not on the list of the cafe. The trifle was in a plastic pot with a lid on and it was topped with on half of a strawberry complete with stalk and leaf; the teapot leaked all over too.

Toblerone, mind the gap, less chocolate for your money