I've just come back from a week long holiday and Lanzarote.  This is my third visit to the Canarian island, the last one being around six or seven years ago and whilst I didn't expect things to be the same, I guess my expectations were probably a little bit high.  Here's a brief list of my grumbles about Lanzarote.  Not to be taken too seriously, just some passing comments really.

First of all there's not enough information about recycling and the resorts don't seem to care much about it.  Here in the UK we're finally getting into the swing of it and so it would be nice to look after the planet whilst on holiday too.  There are in fact plenty of big yellow and green banks for recycling but holidaymakers aren't told they are there or encouraged to use them.

Too many Irish bars.  I think I'll cover this in a separate gripe because with these come the exorbitant prices for drinks.  I can only assume the Irish are absolutely loaded.  Why would anyone want to come on holiday with sun, sea and sand then spend the evening in an Irish bar anyway?  I'm very confused about this - please explain.  There's one Irish bar that springs to mind called Mulligans immediately because we only stayed there for one drink and came out of it's darkened depths a good deal lighter in the pocket.  In my opinion 5 Euros for a drink is a bit on the steep side.  If you went into The Dog and Duck down the road and the barman said "Two drinks that'll be 8.36 please" you'd probably choke on your pint.  I only wish we'd seen the trip advisor page before we left.  By the way I can thoroughly recommend Bluebells.

Touts on the street that hassle you every time you walk past a bar or a restaurant.  Well okay, these have always been a feature of the Canarian islands (and many other holiday resorts I suppose).  You learn to put up with them but it seems to be much worse now.  Perhaps this is because of the recession, everyone is desperate to make a living. 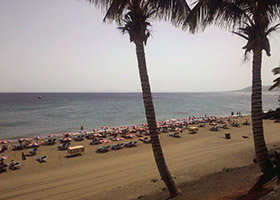 The bling and fake Rolex guys that come into the bars and try to sell their stuff.  These guys are just annoying and there's no excuse for them but for some reason or other the bar owners seem to tolerate them.

The Chinese ladies who come into the bars and try to sell things with flashing lights, they always target the kids.  Not quite as annoying as the bling bling guys but they don't make your holiday special either.

The standards in the restaurants appear to have slipped big time and it's particularly annoying when they advertise prices on their menu without the tax.  For the unwary traveller it could come as a bit of a surprise when the bill comes.  Then there are the restaurants that put a bread roll on your table without you having ordered any and they add it to the bill.  I wasn't personally fooled by this but as some UK restaurants provide complimentary rolls it could come as a surprise when the bill comes.  With a few exceptions the quality of the food on the restaurants along the main strip in Puerto del Carmen where I stayed was pretty mediocre and not exactly cheap.  It seemed reasonable at the time, but when the tax, drinks and tip are added, it doesn't really sit well with the quality of the food served.  Our dreadful Euro to Sterling exchange rate probably doesn't help things either.  Another gripe about the restaurants would be the constant hassle whilst checking out the menu boards.  Times really are tough and they're fighting hard for customers out there but it really turns one off when you can't read the menu in peace.

Aqua Park isn't great value for money in my opinion, especially since you can't take in your own food and drink!  The restaurant is in fact reasonably priced but lacks variety.  Many of the slides appear to be quite old and they seem to alternate when they are operational - could be a lack of staff?  Queues weren't too long though so there was plenty slipping and dunking to be done.  The "suncare specialist" who droned on for ten minutes then tried to push her lotions and potions was cheerfully ignored by almost everyone.  I actually came across some scathing reviews of Aqua Park on my return, had I seen these first I probably would have spent the day down the beach instead.

Entering pretty much any shop along the sea front will result in being pounced on by the shop owner.  They're friendly enough but a little too keen to make a sale, this makes quietly browsing almost impossible.  Another symptom of hard times?  Then there;s the inconsistent prices in supermarkets and shops.  The prices seem particularly high along the sea front - presumably this is because of the tourists.  It's so annoying when you buy something in one shop and then find the same thing two doors down several Euros cheaper.  Shopping around first would be fine without the 41 degree temperatures and the constant pouncing.  Probably best not to buy anything or look at anything then!

Lots of stray cats and people treat them like vermin.  Personally I love cats and think the authorities should neuter the toms to keep the population down.

Okay, it might not sound like it but I did actually enjoy the holiday.  Probably won't go back to Lanzarote though as it's kind of lost its charm for me.  Maybe I'll go to Fuerteventura next time, it's been a while since I was last there.

Go to Nerja near Malaga, the most beautiful town in Spain, great value, great scenery, great prices, over 300 restaurants and only one irish bar which is spanish
10/07/14 www.easyhandyman.com
1

I have to agree with the above. We have just returned from a 10 day holiday in Lanzarote and we wont be going back! There are way too many Irish bars which seem to have a 'clicky' attitude. We felt intimidated by their attitude towards us English. Food and drink is very expensive. Most restaurants offer the same deals and they bug the hell out of you to eat in them. It is a lovely & clean island and we felt very safe there but sadly there wont be a next time!
12/09/11 Mrs X
-5

You should have listened to what other people say. We are" oldies" of limited means and have been holidaying in Lanzarote for over 12 years BUT at Costa Teguise after a timely warning about Playa Del Carmen from family before our first trip.We like the freedom of self-catering and by sheer luck having found an ideally situated and reasonably priced apartment location at The Oceano have been there about 14 times and look forward to our next visit.Not state of the art but clean comfortable and friendly. None of the problems which appear to be confined to P.D C.Flying from LBA Jet2.Com What a pity they too have caught the baggage rip-off virus from Ryanair!
29/01/11 Pedro
-7

If you do not like 40 degree weather and want a good holiday, why did you select Lanzorote?
Yes, you get what you paid for.
I know people who choose hotels purely cos you can eat all you like and a large pool with nightly entertainment and then love to complain. Eeeeeewww! gross!
Check holidays thoroughly and expect to pay a bit more.
good luck
12/10/10 ha ha
4

As with any holiday destination, there are good resorts and bad resorts. Do your research before you book, that's the lesson!
13/09/10 Smart Traveller
7

I had no interest in visiting Lanza-grotty. But perhaps I should reconsider if there are some good parts to visit. I always associated it with chavs and binge drinkers. No thanks.
09/09/10 Grumpy xx
0

> take another look at England!

I'm taking a look at England right now and I see rain pouring down just as it has done for the last month. My washing is soaked (thought it would dry in that brief couple of hours without rain today). Still, a little bit of rain (or a lot) has got to be better than 41 degrees right?
06/09/10 AOD
-2

Puerto del Carmen is as typical of Lanzarote as Swindon is of Britain, in other words it's where the lowlife go, which is why there are 'Irish' bars and restaurants touting for tourist business.

It's also the place where the illegal African immigrants from the 'pateras' end up, being one of the closest parts of Europe to the continent of Africa. Once on Spanish territory, they have free movement within the countries of the Schengen area, and whilst on the island they try to make a few bucks by stealing from tourists, selling counterfeit goods, drugs, and themselves.

Lanzarote, once you leave Puerto del Carmen and Arrecife, is a stunningly beautiful island, but Puerto del Carmen serves a useful purpose in keeping the riff-raff away from the rest of the island. Long may it continue to serve that purpose.
06/09/10 MikeP
-8

Go to Gran Canaria next time you want a bit of convenient winter sun. I enjoyed it there. No chavs or rowdy Brits cluttering up the place binge drinking and causing a breach of the peace, nice people, great weather in winter time and, best of all, a great rum factory (not that I can remember much about that excursion).

Next time youi go to the Canaries, why not buy a fake Rolex and bring it back and sell it to Disgruntled E-bayer. She'd be thrilled to bid 2 grand for piece of junk, worth a tenner at best. [wink]
06/09/10 Grumpy xx
-2