In light of the recent headlines regarding Jamie Carragher and Alex Ferguson I feel the situation has gone too far.  It has reached the stage where so called 'football fans' can get away with screaming the most foul, vile verbal abuse, often about the players family.

So exactly what is the football player supposed to do?  Are the meant to accept it because 'that is what he is paid highly for' according to these idiots who shout out these nasty, horrible insults?

And wo betide the player who scores and then quite rightly celebrates his goal.  He is accused of inciting the crowd and by the same people who have dished out the non stop verbal abuse for 90 minutes.  They want the player arrested and charged by the police and the FA for hurting their feelings!  The hypocrisy is staggering.  I don't care if you are the richest football player on earth, no one should have to put up with this kind of horrible verbal abuse whilst trying to do their job. 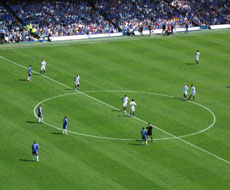 Would these people verbally abuse Bill Gates if they met him on account of the money he earns?

I just find it very sad some people can get so pumped up and then act in a way that would see them arrested if they behaved like that in the street.

Wouldn't it be interesting to see some of these idiots meeting their targets in public (without a group behind them).  I wonder if they would still be brave enough to shout out nasty insults?

i think we do have the right to criticise players if they don't perform to our expectations, but not too much as it could make motivation worse. however, insulting other people's families is a bit too extreme. perhaps the fans are attention-seeking, wanting to insult rooney so they can be the top story on tomorrow's papers. it's really disgusting and vile, and no footballer should be subjected to this abuse, even if they are overpaid. the fans need to sort themselves out, i think.
01/12/12 Hazza
-1

I don't really see the harm, as long as it's not racist or homophobic or anything to do with an "ism". They get paid a lot (A lot a lot a lot) to play football, in front of a bunch of hyper and often drunk people. People don't shout at them because of how much they make, but they think it's OK to because of how much they get paid-and I agree. As long as it doesn't get violent, I'm sure getting called a d*ck is worth the money they get paid.
08/04/12 Holloway
-4

You get so caught up in the action and atmosphere so that when you witness a piece of crass incompetence by one of your players, its hard to contain your feelings. Once when one of our strikers missed his fifth guilt-edged chance in the game, I forgot myself and called him a useless `c`. I was not proud of myself, but I`m certain it will happen again.
05/01/11 Biscuitbum
-11

Swearing in public - I get so annoyed when I hear people effin this and effin that - and you can just......! I took my grandchildren to the park in the snow, and we heard kids about ten swearing loudly. I told them politely - but firmly - to stop the bad language. I do not want my grandchildren to hear it. Thankfully - they responsed positivley - apologised and stopped. But how many times have we all heard fathers swearing at their children and you can bet if the children did, they would respon "I don't know where they get it from - the must hear it in school!"
20/12/10 Bagpuss
2

Can anyone think of thoughtful calls from the spectators for Wayne Rooney? Tomo doesn't want anything untoward. How about, "Nice socks Wayne!"

lets all pat each others bums a lot, kiss and cuddle , genrally act like spoilt babies, cry at the least little thing , cheat , roll about as if were dieing , get paid a fortune from the hard earned of morons much less well off than us who are incapable of giving up hero worship although they profess to be adults . and have utter distain for morality or the fact were looked upon as role models .
we always get away with rape, spitroasting, speeding, getting bung charges thrown out, its great were virtually untouchable , .
04/05/10 a prem footballer
2

I think footballer are cads bounders ner do wells , poodle fakers , and jolly bad eggs all round ,
there we are thats told them ,
28/04/10 tarquin fawcett plunkington
3

Liverpool will probably deserve all the abuse they get this weekend when they roll over for the Blues. But I can't wait to see Dogbra punching the air in front of the KOP.
28/04/10 Goonerz
-10

This probably wont go down well but never mind, the fans may not agree but they are the ones to blame for paying their over inflated ticket prices for a start.
Correct me if I am wrong but does all this money raised from entrance fees contribute to spoiling this pampered lot with their out of touch with reality wages I wont say earnings because there is no way on this earth that these people earn that amount of money.
Its high time that this so called "beautifull Game" god it makes me kringe just to say it had a right good kick in the backside and brought back down to earth.
All the hype and constant talk about players earnings and transfer fees and not to forget the worlds existence will be decided on wether the lads get one goal or is it two or three who cares.
The sooner Football is returned to being a sport instead of a business the world will be a much better place.
Gingertrucker
05/02/10 Gingertrucker
-20

What I hate hearing is people moaning about how much these football players earn in a week, its simple here, don't buy a ticket, no-one is forced to go to a football match, fair play to them I say.

Unlike those people who work for councils in the UK, that agree to pay each other in excess of one hundred thousand pounds a year, using the excuse that other councils pay that kind of cash, people living on the breadline support these corrupt parasites, who shouldn't be on more than thirty grand a year, we have no choice but to pay up here, bleeding the workers dry.
12/11/09 Gainsborough lad.
-11

Footballers are strong characters and if they can't take a bit of criticism when their play is poor, then they are wimps and should not be playing. Having said that, any abuse about their family is unacceptable.
02/08/09 Terry
-13

Tomo,I don"t think the players notice,they are too busy shouting abuse at the poor old referee about him and his family.Most of the players speak english as a second Language so the rantings of the typical cockney,scouse,or geordie yob would be entirely unintelligible to them.
01/07/09 Mike Pratt
-7

Yeah, come on, these guys are paid a small fortune. I'd happily take all the shouted insults at a football match for a fraction of what they earn. It's the mentality of the game anyway!
05/05/08 Bruce
-8