I guess I have thought this for some time now, but you're all just a bunch of hooligans aren't you?  I'm referring of course to English football, and in some cases the rugby crowd.  Yes okay, I know that is a bit of a sweeping statement and it's only my opinion, but there are just too many bad apples in the cart as far as I can see!  These hooligans just can't handle it when their team looses a game and they become violent.

Saturday evenings in this country can be a complete nightmare after a big football match.  The volatile mixture of an aggressive male dominated sport and alcohol can often make the atmosphere very unpleasant in some town centres.  I've witnessed it on numerous occasions whilst out at the weekend, supposedly enjoying a quiet evening with friends.  If there's not a fight kicking off in a pub somewhere, then it will probably be in the street outside.

Why do we have to endure this kind of behaviour all over the country every time there's a football or rugby match on?  Also, why is it particularly these two games that cause all the trouble?  I haven't heard of a rowdy bunch of cricket supporters or golf fanatics tearing up the town centre in a drunken rampage.  I wonder if it doesn't stem back to some sort primeval urge.  After all, far from resembling a beautiful game, a football does kind of remind me of a pack of animals hunting down their quarry. 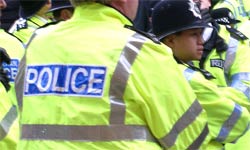 I don't suppose the antics of the players on and off the pitch help matters much either.  They are paid enough, so one would have thought that they could afford to learn some manners and respect for other human beings.  We won't mention spitting on the pitch at this point.  It's disgusting, but I kind of understand why they have to do it.  I just wish they wouldn't do it so frequently, and I wish the camera man wouldn't always get that particular shot.

Another thing that I think it is worth pointing out, is the fact that football violence in the news is quite often linked to English fans in particular.  The headlines always refer to "English yobs" and how they have caused yet more trouble abroad whilst supposedly supporting their national team.  You rarely ever hear any mention of Scottish or Welsh fans causing a ruckus do you?

I find the thought of football hooligans strangely attractive - the violence, the coarse working-class accents and the unmistakable aromas of cheap alcohol, hand-rolling tobacco and dubbin - the colorful neck-scarves and the knee-high bovver-boots.
04/05/14 Fred E
0

I do recall in the 90's and I am dispatched by the local rag to interview a cross-section of these hearty fellows, a scarlet faced chap mumbles a bit into a dictaphone and his mouth hinges open and his throat begins to work - Realising just in time, I am obliged to step smartly back as a slap of vomit hits the sidewalk, where only a split-second prior were my best leather lace-ups. Never again!
07/04/14 collar
0

Have you seen these foreign hooligans? They wear those green bomber jackets, bleached jeans and DMs, they look like that skinhead on the persil advert, Tim Roth in 'Made in Britain' or what's his name from The Flying Pickets, they look like a late 70's/early 80's throwback, I bet they're still listening to Skrewdriver, why can't foreigners be more original instead of copying us? I have to say though even though they look naff it still looks better than all these foreign players wearing gloves and tights or having a hair band, can you imagine Nobby Stiles or Jack Charlton going in for anything like that?
30/01/14 Tired and emotional
0

Football hooliganism died out in England years ago, It is a big problem in Europe though, generally Eastern Europeans randomly attack anyone whereas Southern Europeans tend to stab people in the tradesman's entrance, they do use knives though, there was a massive riot at a game in Egypt too and South American hooligans have to be contained behind electric fences and moats, football is so middle class these days it has become poncified, the league is full of cissy foreigners who fall over, mind you in the lower leagues and at grass roots you've still got proper English players who don't bottle out of tackles, feel the need to come out as shirtlifters or prance about in yellow boots, these kind of people are proper Englishmen unlike the metrosexual Johnny Foreigners who have turned what was a great league into a procession of pooftahs.
30/01/14 Tired and emotional
-1

For a proud and strong young working-class Englishman, it is almost a rite of passage to go out for a beer on Friday And Saturday, and what better way to finish the evening off, than with a good old punch-up?
So long as both parties are able and willing I do not see the harm.
27/07/13 Joe from Splott
-5

I wanted to address a couple of points:
Yes the thing thats said earlier that wages and prices in prem league grounds are a rip-off which is why I wouldn't go to that level of football game.
My hometown only charges Â£12 for adults every saturday and the players earn a weekly wage the same as anyone watching of a few hundred a week at most.
The original griper's comment that football and to a lesser extent rugby get the hooligan element to them is that those are watched and supported by far more people than golf or cricket so the same % of hooligans among the fans would be far more people.
Besides, its the sports that inspire passion that get the blood up. Golf hooligans? Who gives a toss about golf or tennis, you can't even cheer when your favourite is winning or scores a vital point anyway. Who pays to watch paint dry?
27/07/13 ahforfoulkessake
-9

The sport we USAans call “football,” which is basically rugby with helmets and loads of extra padding, is much more brutal on the field, yet we don’t have problems with hooligans. Even Oakland, California doesn’t get torn to pieces every time the Raiders lose a game.
26/09/10 Jojo Bizarro
-10

Generalising a whole group of people. Next you'll be saying all foreigners are terrorists! You could always leave the country if you dislike it that much.
24/07/10 Football Fan
-12

football went down the pan yea

That old saying is not true at all. The amount of rugby players and/or fans I've met or bumped into during the years have mainly been beer swilling thugs.
24/04/10 football went down the pan yea
-11

I've been to loads of top flight club and international rugby matches and have never seen any trouble. Never. Venues obviously recognise this fact that rugby fans know how handle their booze and go to a game for the sport and the banter and not for a fight as they all serve alcohol before, during and after a game.

Wow Howsoonis now why dont you say what you realy feel lol.niceone.
Yes this kind of loutish behavior realy is a embarasment to society, its high time somebody in this shambles of a goverment stood up and said thats it a return of the Birch then see what happens.
There would be second thoughts about trashing some pub or beating up some innocent person if they new what that felt like.
Comming back to reality of course this will never happen because in the eyes of the Do gooding Politicly Correct Human Rights brigade this is barbarick.
If we cant see the return of some sort of efective detterent suppose they could always be tyed up with electrical flex and thrown down the nearest dissused mineshaft under cover of darkness.
05/02/10 Gingertrucker
-11