I am really fed up with being surrounded by 'pseudo' Chelsea fans at football matches.  I have supported my team (Chelsea) since I was a kid - and whatever they've done, good or bad over the years.  I have always stayed loyal to my team and I always will.  Isn't that what you do if you are a serious football fan?

Over the last couple of years though, there've been a lot of new faces at the football matches that I go to.  I often wonder what team these people were supporting before, because they certainly weren't in abundance at all the Chelsea matches I went to. 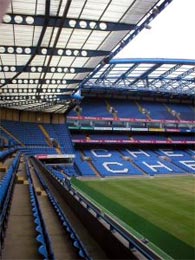 My gripe is with the way they don't truly support the team. When things are going well there's no problem, but if we go a goal down or don't power through every tackle, these so called supporters just moan and gripe at the players and the team. What kind of support do you call that?

So let them go off and support Liverpool, Tottenham or even Man United please; that way I can get back to enjoying supporting my team without these moaners!

Jac, I'll bet your as quiet as a door mouse next Wednesday after Messy man is finished with you lot LOL
07/04/12 Jethro
-5

Who cares? Mostl the premiership players are foreigners who don't care about the game, only their paypacket.
24/02/12 Arse Wenger
2

up blues, Chelsea for life no long thing we are the winner of this season champion league
21/03/11 daalcantra
-10

For the best interest of the team, im gonna say what a lot of chelsea fans aren't but ought to be, Lampard does not fit in the system if Torres and Drogba are to play together. Drogba does not fit the system if Lampard is going to be on the pitch( torres over drogba because we just spent a fortune). lets face it, you can only have so many players on the other side of 30 on the pitch. Another thing, I think we better stop paying quantum sums of money for players before our team ceases to exist.
10/02/11 el seven
3

You will always get this. This is why Blackburn and Bolton can`t fill their modest capacity stadiums. The fans want success and they support Man Utd. and presumably also in future City. As a gooner, I like to have a smattering of celebrity fans, and at least this goes some way to counteracting all the celebrities who support the chavs.
05/01/11 Biscuitbum
8

I want to be a chelsea fans and to inherit some goals thanks my email;habeebabolaji@hotmail.com
09/10/10 abolaji
-1

I think that all teams have these so called supporters who moan constantly. I know we have a few at the Emirates. I agree that it's very annoying and wish that they would just get behind the team too. It seems that paying such high prices for tickets puts these people on some sort of power trip which makes them think they have the right to moan constantly! (so annoying that I can't type the name of the team I support as it gets rejected for swearing!!!!!)
24/07/10 Gooner
3

I love chelsea and I want to be chelsea fan and my Email is ozoemenannamdi@yahoo.com
27/01/10 ozoemena nnamdi
-1

I never Talk to a real Fan of Chelsea like me and You all , I just see everyday fans of Abramovich's Chelsea ...
Some will say that I'm one of those supporters who like Chelsea since Abramovich and It's true that I became a big fan of chelsea after Abramovich even If I always liked Chelsea ( but It's not easy to be a fan of The old Chelsea when You are 14 now ). But After I realised that The new chelsea was only money , And everybody told me : CHelsea = Money , it's not a club etc...

But After realising that the new Chelsea is only money , I looked the way we always used play , I looked at the history , I looked at alot of old Match of Chelsea and I was facinate ... I just love this club ... And everytime that somebody say CHELSEA = MONEY and that there's no passion I juts want to kill this somebody !!

I'm a Chelsea fan since not a long Time . But I'm not like the ones you talk about in Your Article . I love Chelsea 'cause I read alot of them Before Abramovich , And I can now say that Abramovich just Ruined everything !! WHat I like best in Chelsea history is the '90 with Vialli , Di Matteo , Zola , Wise , Petrescu , Ruud Gullit ...

And I'm sure that We have alot of not real Supporters 'cause of him , 'cause of Abramovich .