This gripe is probably going to annoy a lot of people but it's got to be done!  Football (especially in England) really gets on my nerves and because it's everywhere, all the time, you just can't get away from it.

It's entertaining is it?  Well where exactly is this entertainment value because there are so few entertaining games these days.  The accumulation of points/goals is often infrequent or non-existent! Then there's the money paid to footballers who contribute so little to society. It's appalling and although SOME soccer players give money to charity, the majority do not.  By the way, you just have to fart near an opposing player and he goes down, very manly, very butch, VERY LAME and definitely not entertaining.

Doesn't the presence of so many foreign players/managers/owners who have to be the ones to take the English teams to finals bother you?  It doesn't seem to bother the press.  What about the average English fan?  Where's your pride man?  Please don't tell me its wonderful to have them here showing off their skills because that's just a load of nonsense!

Why bother interviewing managers and players?  The foreign ones can barely string a sentence together and don't add much value/insight and I suppose the same could be said for the local ones too.  Martin O' Neil is perhaps an exception.  Nobody offers anything of value, state the obvious, mundane old cliches.  I appreciate you cant give away team plans and tactics but Sky/BBC, why do you put microphones anywhere near these people?  Do fans hang on Benitez's every word? 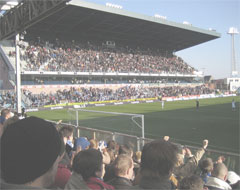 Is it me or do managers (and sometimes players) far too frequently accuse the referee of being biased against them (their team, specific players) in sometimes subtle and sometimes not so subtle ways?  Aren't these accusations extremely unprofessional and childish?  Whilst I appreciate football is big business (and maybe that's the root of the problem), why do opposing managers never compliment the other side?  It's always about how poor their team did, the referee, the surface, the groundsman, the opposing fans or whatever else that they can find to whinge about.

The childish mind games between managers and players is equally embarrassing.  I accept that sometimes, the press hype these things up but its playground stuff man.  A says B is a diver, B has a hissy fit and says A is just plain nasty and mustn't be so horrible.

Why do so many fans view their teams success as a personal reflection on themselves?  Is it because they are such sad, useless members of society who have failed their families, friends and themselves that they project a teams success (or lack of) onto themselves?  Have you read all the childish jibes fans throw at each other 'Our teem r goin' to win da leeg cos yor manager sux.  Tee hee'.  Have you heard the quality of the feedback from the stands (see Lee Evans - Wired and Wonderful)?  Nice, especially when you have taken your family out to the footy for the day.

People often have a go at rugby for being a toff sport when its not really about class/money is it?  You have togs and a leather ball, just like soccer.  Perhaps the basic rules are too complicated for most people whereas any old chav can understand soccer rules.  Go through the above list and see how much applies to rugby.  Even if one or two points were also applicable - relative to soccer?

I recommend we dismantle all football stadium and donate the building material to 3rd world countries, draft the soccer players into military school/camp and beat some sense into them, confiscate their wages and channel this money into training British tennis players and athletes.

totally agree, and coming from the BBC which we are forced to pay to watch. you can't help but feel this establishment media tool love to push out this purposeless tribal brain fodder for the masses that football is, instead of giving people the news they need to make decisions on how these public schoolboys are running this country. ps I don't hate sport but is just that "SPORT"
17/03 icanthink
0

I'm really fed up with "The Suns" articles about English team staying and training in Cracow. Last thing they've published was something about hooligans from Hutnik (the club where England will have their traing sessions) who will invade the stadium, destroy or something...
Dear so called "journalist" of "The Sun". I understand the only thing you live on is a sensation. There is no such thing as Hutnik hooligans. The club is in 5th division (maybe they will be promoted) and not too many people care. And yes, there have been works at the stadium, but they will be done on time. They work simply quicker than you.
England is warmly welcome in Cracow by anybody and the only people they can be afraid of are those who'd like to get a signature of f.e. Wayne Rooney.
08/05/12 Stan
4

Winter has complained to his host company claiming that his account was hacked. This is either the case or a ruse to clear his name after realising the c*ck up.
Nobody can defend that type of rant but I think it is fair to say that the Catholic church has not exactly helped itself down the years. If he wrote it then he is a fool, but not necessarily wrong. If he didn't then will those that have attacked him today take back all they have said?
19/01/12 Freddie
-3

I was made aware today that ex football referee jeff winters is working for sky tv this man is a total disgrace with his current vile rant not to mention all the other stuff that appears on his website if sky do not sack this man I and 60,000 Celtic fans will give up sky tv I notice that sky has not once today mentioned the antics of this idiot.
19/01/12 Caroilne
-2

I agree with the foreign bit but a man supports this sport because it is related to many other males and that is how males connect with each other, so if they want to take this sport personally that is up to them. Speak sense.
14/03/11 Jack
-3

I agree, and what about the football fans who raise money for children's hospitals, (which you might think is an honarable thing) but hey!! it doesn't go to the hospital, it goes to buy match day tickets to fund their team and fill the seats! This is done on the fantasy bilge by saying it is going to a poor little child who is so disadvantaged that his parent cannot afford for him to attend a match. So what? If football is all a child needs in life, it needs to be fostered out to a more responsible parent. I feel very sorry for football fans, if football didn't exist, their lives would empty. In fact, they are already empty. . . And yes, this does happen. Just look at the wednesdayite website.
29/01/11 Rugbyfan
-16

How right you are Pele, especially for a large number of public sector managers and workers.
04/12/10 Private sector worker
7

As I was saying!!!!! That's why the three stooges put in an appearance, so the media would have less ammunition to fire at them. They already knew that Russia was to get the games. How many more are on the take?
02/12/10 Living in the(corrupt)real wor
-1

Living in the real world

So Putin isn't going to bother to turn up at the meeting today, that's because the big suitcase full of money has already been delivered to the corrupt bunch of s****.and he already knows that Russia has it done and dusted..
02/12/10 Living in the real world
-12

'Game'? It's big business, and a dirty corrupt one at that. FIFA is one of the most corrupt and mercenary organisations on earth and Septic Bladder one of the most evil human beings alive.
02/12/10 mikep
-19

"Beautiful game?" I don't know how you live with the fact that a soldier gets paid less in a year to protect the country than a footballer gets paid in A WEEK to kick a ball of leather around with his teammates on national TV.Seriously?
01/12/10 DSG
-22

I see the papers are again full of items about wayne rooney. Am I the only person in britain who thinks that wayne rooney is nothing more than an unsophisticated, uneducated yobbo? back in the old days footballers were gentlemen, hard as nails but gentlemen all the same. And there was most certainly none of this kissing or crying business either.
24/10/10 old but still grumpy
-4

Football is wasted on heterosexual men. Obviously the game is very boring and the wages are mad and people falling over and crying all the time is sad, but where else can you see lots of handsome men in shorts kissing each other.
24/06/10 jd7x7
4

Who would've thought it? The most famous club in the world, Manchester United, in debt with a tag of over £700 Million.

Now in the hands of the Glazier family from the USA.

Hey, there's no greater feelin' than being sold out.

Will all come crashing sooner or later. Footballers and all the corporate associates.
08/06/10 John Bull
-9

Seeing grown men almost having sex on the pitch after scoring a goal isn't my idea of entertainment, but then again if it was 2 women :-)
19/04/10 Rider of the Apocalypse
1