The Rugby World Cup is on at the moment so naturally it is a good idea for people like myself who are not into that sort of thing to basically hibernate.  All the pubs are cashing in with a "Come join us and watch the Rugby" and to ba fair if it's on quietly in the corner I don't have a problem with sport on TV down at the local.

It's when the sport (or rather the morons that come to watch it) start to get a bit loud it spoils it for those of us who have just come out for a quiet drink.  You don't seem to get this with the tennis or cricket, it's mainly with the football and rugby.  Actually, football's worse - it seems to attract a particular type of knuckle-dragger and it's those that I actually have a gripe with. 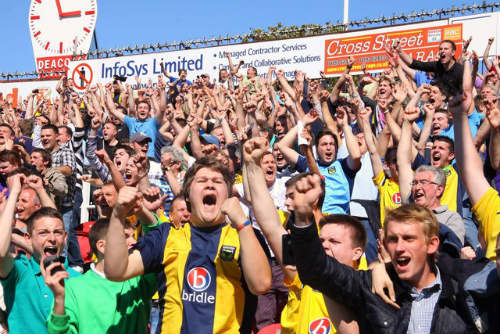 The type of person that feels the need to come into a pub and start chanting or singing sectarian or otherwise religious football songs deserves to be booted out the door again in my opinion.  It's bad enough when you encounter a bunch of louts walking down the street together chanting, but to have to endure it in the pub as well is just too much.  I'm pretty sure most pub landlords that care about their business don't want this either and I'd hope that some of them would take action and ask them to keep it down, and if the continue to make a noise show them the door.

It was best described by a friend of mine recently as tribal behaviour, "almost gang like" she said.  Well I think she was spot on in saying that and I don't think there is any room tribes or gangs in a civilised society.  What do you think?  In fact I'd go as far as to say that this kind of behaviour is in fact threatening, or at the very least intimidating and it should be dealt with in the same way as any other form of threatening behaviour.