So its World Cup time again is it?  You wouldnt have guessed, would you?  Every four years we have to endure this torture and put up with weeks of football on the telly and in the news.

Everywhere you turn theres something going on to do with the world cup and I for one, am getting fed up with it.  Its because theres no way to escape from it thats the real problem!

During the peak of all this rubbish there are precious few pubs you can go into without having to suffer the commotion and yelling is dozens of drunken Englishmen hurl profanities at whatever player has earned their contempt during the game.  I dont mind the fact that pubs have these dedicated sports evenings and show football matches, but does it have to be in nearly ALL of them?  Theres probably a reasonable portion of the population who either have no interest in the World Cup, or actually dislike it.  What about us?  We just want to enjoy a night out in the local without being drowned out every time someone scores a goal. 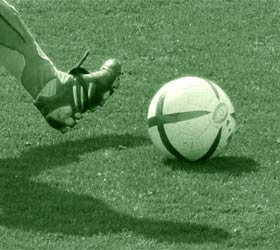 Weve had the phenomenon of the St. Georges cross flags flying from cars for quite a while now. But tune into any radio station now and youll hear a rapid succession of World Cup songs, each one as pathetic as the last one.  Where do they get these from and why do they immediately make me want to turn off my radio?

Another thing that annoys me about big sporting events like this is the way the big companies try to cash in on it with all their consumer crap. Theyre basically just leeching off the real football fanatics and the kids who are no doubt caught up in the excitement and will pester their parents for the latest gear.  It just makes me sick.

Heres an example, in the petrol station the other day when I spotted this stupid plastic coca-cola beaker.  It was selling for around 4, but who in their right mind would fork out that kind of cash for a stupid glass because it says something about the world cup on it?

Come on; lets make the World Cup every ten years instead of every four.

totally agree, pubs and when you get home its coming from the BBC which we are forced to pay to watch. you can't help but feel this establishment media tool love to push out this purposeless tribal brain fodder for the masses that football is, instead of giving people the news they need to make decisions on how these public school kids are running this country. ps I don't hate sport but is just that "SPORT"
17/03 icanthink
0

The BBC senior policy managers have said stuff you if you don't like Euro football, they are going to play the games and are going to talk about football as the most important news items . So hard luck and tough if you don't like football get over it, the BBC knows best and what we all want to watch, well done BBC.
22/06 Production Team
0

Loved another footballing show but the papers, tv, and life gets taken over
18/08/14 ANTIFACEBOOK
0

Just be thankful that one game is out the way, point taken, loud cheering from fanatics is an offence. It comes under the heading of 'causing excess noise'. The crowd was originally well behaved but went on to combat the other fans, excessive noise made by the extra rowdy ones, blown whistles etc., but can be football rattles too or any form of excessive noise making device from a fan. I know this because I have been to countless matches for this experience (normally after they have imbibed a 'few bevvies'). I know it's nothing to do with the players but I thought it might be an idea to have a quiet word.
20/06/14 collar
0

Enjoying the World Cup on tv apart from England.

What good is there in people WATCHING sports, really? I personally cannot find any. Guys (I'm gonna keep saying guys although I'm aware that there are sports-liking women (read: women I dislike) as well) yell and scream at their TVs like what's happening on there is gonna change their lives. They act like specific players represent their whole state even though the player was just recently bought by the team. People have rivalies over this s**t. WHY?! MAKE A SANDWICH OR SOMETHING! That's at least productive in some way. Religion might be the opiate of the masses but sports are the opiate of the male masses.
06/12/10 DSG
-7

MikeP, you are such an unhappy person. It is really rather sad. Having a gripe is one thing but there is so much bitterness in what you write here that you can only be in a very difficult situation emotionally. Maybe someone can recommend a hypnotherapist or something convenient to Mike's home.
12/07/10 anon
-11

Thank heavens this whole pathetic dribblefest is over and we can stop hearing people crapping on about 22 stupid overpaid girlies squabbling over a plastic ball.

Now maybe you working class people can get back to work or to your dole queue.
12/07/10 MikeP
2

What a lousy World Cup. It's biggest star was a cephalopod mollusk and the only remarkable events were highlighted by the gall and delight with which the cheats celebrated their success. Hang your heads Uruguay and Germany...not to mention France who cheated Ireland out of a berth and then imploded under the stress of their sum character vacuum.

Incidentally, Brazil 2014 has been canceled. FIFA has decided to scrap the event proper and simply ask Paul who to award the trophy to.
12/07/10 anon
1

poor game but congratulations to Spain

yes I agree England were pathetic, so were the officials.

one reason we lost no sunderland players in the team.

thats if you know were sunderland are in england?

and what are people from sunderland called mike p & a..o.d.