Most days when I get home from work I prepare a meal and then turn on the television to catch up on the latest news headlines.  Unfortunately though, there is too much emphasis on sport on the news and TV in general these days, so much so that it sometimes seems to be taking over!

Instead of current affairs, you get the latest football news.  Man United scored these goals and Arsenal did this.  Not really the most important thing going on in the world today!!

It's an obsession in this country

I'm sick and tired of the obsession in this country with sports news and in particular football and rugby.  I don't have anything against sport and think that on the whole it is a positive thing; not only for the health benefits if you participate, but it can also be useful for developing effective teamwork skills. 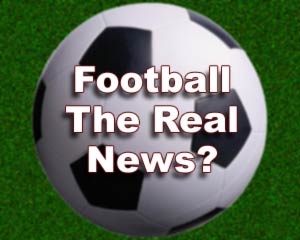 My main gripe is really with the amount of time dedicated sports news in the media.  It's fine if they provide an update of the English premiership results at the end of the main news, you can just switch off when it starts and at least you have a choice.  What I do find infuriating however, is when the news bulletin starts off with some form of sporting drama.

Who cares if a football club sells a player for an extortionate amount of money, or that Australia kicked England's butt in the cricket again. This isn't newsworthy!  It's sport and as such should be scheduled with other sport related programming.

I think that real news should be shown first because our economy, politics, health and education etc. involve everyone; football on the other hand, is a recreational activity that is not appreciated universally.

Right, I'm off to watch the Grand Prix now, because it's time for my nap and I've had enough of all this bloody football news!!

I agree. I made a complaint to the BBC about it. They said if they receive a large number of complaints about it they will respond but they do not intend to do anything about my complaint.
02/08 Maisie
0

I totally agree, it's absolutely relentless & one sport after another. No alternative whatsoever if you don't like sport apart from EVEN MORE repeats or yet another boring James Bond film. I'd like to pay half price for my TV licence in that case
01/08 Wappydoo
0

Totally agree, i think there is or used to be a bbc sports channel, shove all the tripe on there, today 30/7/22 bbc1 totally wiped out with the comm games, never mind there is loads of kate bush stuff on bbc2!! nothing against kate bush i would add but its all vintage , and the "re vamped" news look aargh , i think they stole the idea from alan partridge even down to the touch screens , and the smiling idiot who comes on at the start and says "and coming up on the ???whatever channel" sounds like a kiwi /aussie. Just got over the tennis, women football (hope they lose ) now the comm games , pathetic but hey the great british public couldn't live without it, i complained about the euros last year and got a very rude reply saying we should be proud to be staging such a tournament..........i fear it will only get worse in these days of out w.o.k.e.
30/07 pissed off
3

Sick and tired of the amount if sport on the BBC, it's the assumption that everyone wants to watch it. It's really nit my thing at all I find it boring. It's was Wimbledon in June, now it's the Commonwealth games. The BBC needs to get a Sports channel!
29/07 Sick if Sport
1

Sick,sick,sick of wall to wall sporton BBC , we aren't all sport nuts tv is for entertainment.
29/07 Annoyed
2

Way too much all the time. Not impressed at all how fast someone can run, chase a ball hit a ball. Boring all the games and events are pretty well the same as the last. Keep this to sports channels.
29/07 Bazzer
0

Why all of a sudden are women's sports being thrust into the limelight. Years ago, women's football was considered a joke, now you cant move for adverts for women's football.
26/07 Robert
1

I am forced by law to pay for a television licence which I believe is used to fund the BBC. I really object to find that during Wimbledon we had tennis on both BBC channels at the same time for much of the afternoon and evening. Its still going on with endless football and athletics / games.
Most of my watching is channel 4 & 5, Quest ansd PBS America - I bet they don't get any funds from my licence fee.
25/07 Annoyed of Norfolk
3

totally agree , and coming from the BBC which we are forced to pay to watch. you cant help but feel this establishment media tool love to push out this purposeless tribal mind fodder for the masses that football is, instead of giving people the news the need to make decisions on how these public school kids are running this country . ps i dont hate sport but is just that "SPORT"
16/03 ONEOFMANY
4

every weekend football is taking over normal programming on tv.
28/11 angry
0

Way too much... especially football ðŸˆ... every college game? Really? You have to pay extra to watch your baseball team but there's football on EVERY major channel every single day!!
05/09 Cat
8

Agreed totally, personally I loathe football with a vengeance spreading viruses carelessly with red faces bloched with heavy drinking
Not giving a damn about anyone anymore except to shout abuse and fight STOP ALREADY THINK ABOUT WHAT IS IMPORTANT, you transform sport into war ,if you want a war go and join the army, not the pub army the real one ,a force for good not for Covid
29/08 The Watcher
4