You've probably heard the term 'smartphone' banded around the Internet recently, and if you haven't you probably will at some point in the future (assuming you use a mobile phone that is).  Mobile phones are great for making calls on the move but it doesn't end there.  These days you can do much more with your mobile phone (or smartphone as they're now called).  You can send and receive email, browse the Internet, open and edit office documents, participate in social networks, you can even navigate from A to B with your phone.  A mobile phone quite simply is now more than a device for making telephone calls and at some point in the future, all mobiles will have the capabilities of current smartphones.

Smartphones themselves aren't the point of my gripe though, it's the mobile network providers that I have an issue with.  You see these new phones can do a few other interesting things too such as as streaming music over the Internet and streaming video from Youtube and for some flash enabled phones streaming video from any other live video source.  Why would you want to watch a video on a little mobile phone screen?  Well in fact, some of the newer 'phones' such as the Dell Streak (technically a tablet I suppose) and the new Motorola Droid X actually have quite large screens.  But even on on smaller screens such as the Google Nexus One and the Motorolla Milestone, consuming video is actually more than acceptable on the device.  Why is streaming video and audio an issue?  Well it all comes down to amount of data and the fact that them mobile network providers are starting to tighten the noose on the amount that customers are allowed to download each month.  To my mind that is a BAD thing.

Personally I bought my first smartphone, a Motorolla Milestone running Android earlier this year and I can already see where this is going.  I can't recommend Android enough by the way for anyone who is thinking of changing their phone in the near future.  Anyway, according to T-Mobile whom I am contracted to, I am entitled up to 3GB per month after which a fair usage policy comes into effect and whilst I can still browse the Internet, streaming Audio and Video will be off limits.  I have in fact hit this limit several times already and I don't consider myself to be a particularly heavy user.  In terms of capacity today, 3GB is I believe quite insignificant when you consider that these phones are capable of storing 32GB anyway.  This was advertised as Unlimited Internet by the way and I've always thought that companies shouldn't advertise their product in this way when they have a fairly restrictive fair usage policy.

As it happens my 'excessive' usage has mainly been caused by streaming audio over Shoutcast radio as I cycle to and from work.  Mainstream British radio is dreadful and to be able to do this and have great music on the move is quite amazing.  But it comes at a price it would seem, although it has to be said, as a T-Mobile customer I actually think I'm quite lucky... for the moment, because many other network providers aren't quite as generous in terms of the amount of data usage they allocate to customers.  With Orange for example, you get 1GB and O2 have recently decided to end their unlimited 3G deals with a 500MB cap on the lowest priced contract.  Even Vodafone aren't offering anything better than 1GB a month plan at the moment, so if you're considering buying a new iPhone 4 this month (and you're not left handed) then choose you're provider very carefully. 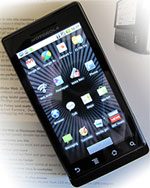 Network providers used to be a bit more generous

The thing is, if the mobile network providers used to be a bit more generous with their data usage tarrifs, why are they restricting them now when the use of mobile handsets to browse the Internet and consume media is quite clearly blossoming?  I can appreciate that if everyone were to start streaming videos and music, then the network would quickly become saturated and the service would suffer.  But not everyone does that - at least not yet!  Instead of stifling the technology they should be embracing it with both hands and spending more upgrading the network to cope with the extra traffic.

In the meantime most modern handsets can also connect using WiFi and until the mobile network catches up with the handsets, there are plenty of WiFi hotspots around. For example Wetherspoon pubs now offer its customers free WiFi and many others are doing the same.  You can also utilise your own broadband at home and around the garden.  Switching to a WiFi connection where available will help you save your data allowance and there are plenty of applications out there to help you monitor your usage, although a helpful network provider will send you a text when you're approaching your monthly limit anyway!

privacy issues are of greater concern to me from using all providers of cell phone
traffic...there is no privacy anymore-just piracy
15/02/20 nop name
1

Mobile broadband customers with 3 can expect to witness dramatic drops in service during 2011 as the effects of 3's new unlimited downloads package for smartphone users begins to kick-in.

3 are the most criticised network in the UK due to poor service, legendary poor customer support, wilfully negligent oversubscription, systematic failure to improve since the inception of the service and now this.

Therefore 3 News strongly recommends that if you have previously never had any dealings with this company, then keep it that way and use a reputable network instead.

If you watched last weeks episode of Click you'll see that unlimited internet on mobile phones is going to be a thing of the past soon. Let's just kill off a market as it's starting to thrive. Typical!
15/07/10 Ron
-5

PLease learn to use apostrophes correctly. You're means "you are" and it's means "it is". If you are going to write in English for global consumption then please learn to use it correctly first.
08/07/10 Wazzo
-3

the reason why is because a) 3G was over hyped and over sold thus very lacking investment. b) networks can get away with it because we're Brits and take it up the..
01/07/10 Terry Tibbs
-1

My balcony is a rather old fashioned solid one with a wall rather than bars so you won't be going aeronautical! It's not a cunning plan to rid the world of grumpies , being one myself.
01/07/10 Pedestrian Pat
-10

Sadly I live in a flat and have no lawn for you to ride over and have parquet flooring so no carpet either. You are welcome to have a ride around my balcony though as you are a responsible cyclist who does not ride on the pavement. Will make you a nice freshly brewed coffee after your ride:)
30/06/10 Pedestrian Pat
-15

I hope that the grumpy one rides her Brompton in the road and not on the pavement?
29/06/10 Pedestrian Pat
-10

You should be fined £80 just for posting on here :) You sound like the sort of person that needs a SatNav just to find the frozen peas in your local Londis and a compass to find your way to the exit.

I also ramble as well. Instead of admiring the view, and enjoy listening to the cows mooing in the distance, do you stare at your iPAD instructions to show you how to put one leg in front of the other too?
29/06/10 Grumpy xx
6

You and that bleeding Brompton again- nasty vile bikes that should be kept well clear of the supermarket aisles, or better still all taken to the two-wheel scrapyard in the sky.
I hate cyclists as I am a rambler, every cyclist should be fined £80 just for breathing

But I do love my gadgets- I have a SatMap and remote control house lighting, but alas I broke my HTC smartphone after a little incident in my hot-tub.
29/06/10 rpmay!
-4

Probably Peter. I'm not that up with the latest gadgets. Most of them don't work; too expensive; too flash and difficult to use with incomprehensible instructions - normally written for a different model than the one I just bought; or they are just plain pointless. Even my TV is about 10 years old and I can't see the point of changing it either. What does HD do? The programmes are either good and worth watching or they're not. The lastest plasma screen, HD readiness (whatever that is!) isn't going to turn some dreadful reality TV programme into the stunning epic series Forsythe Saga now, is it!!

I do ride a Brommie (Brompto fold up bike) though, not a Penny Farthing, which I fold and place in my supermarket trolley. This is, without a shadow of a doubt innovative thinking and behaviour - so much so that everyone comments on it.