Well, I did it last night, but only after several months of nagging on behalf of Microsoft.  I finally downgraded my computer to Windows 10 and I'm not using the term "upgrade" because I really don't see the new version of Windows as any such thing.

To begin with this has been forced on me and although not literally, the frequent intrusive pop ups and full screen warnings of a free offer about to expire have left me no other choice so I would say the update was forced on me.  I've held of doing it mainly because of concerns that my favourite game and other applications that I frequently use may not perform as well.  Better to let someone else find all the bugs! 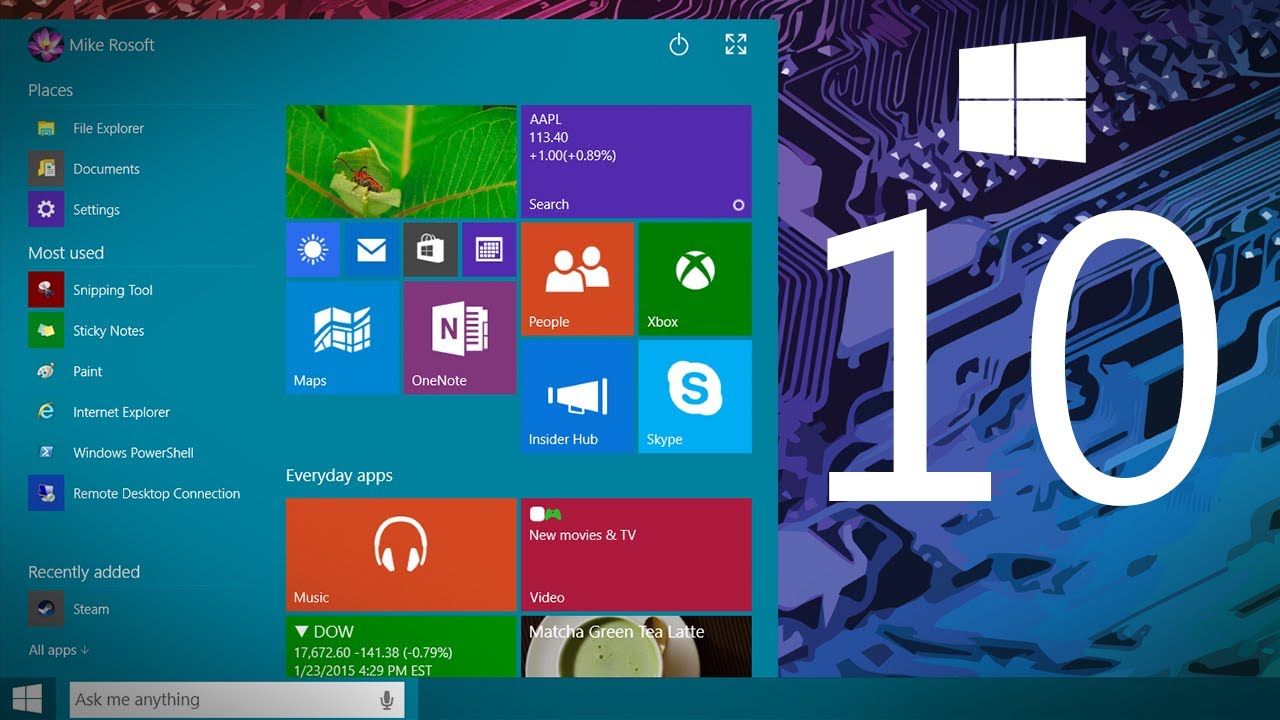 The first thing that annoyed me was the fact that it wanted a restart after downloading.  I chose "later" because I was in the middle of something and was about to watch a film via my Plex server.  To me "later" means at some point in the future of my choosing and not when I am halfway through my film!  Okay, so my entertainment was interrupted and I went off to watch something else on my Chromecast, because it looked like it may take a while.  In actual fact it didn't, but the "all your files are exactly where you left them" screen that displayed for a long time didn't fill me with confidence.  Finally, I arrived at my login screen which of course looked different.  I expected changes and once into my desktop things looks similar but clearly there was more.

The thing that irked me the most was the fact that my default browser preference had been overridden and set to to Microsoft Edge.  No way in the world would I elect to use Internet Explorer or any of its derivatives.  Microsoft lost that battle a long time ago and Google Chrome came to the rescue.

Then there's that Cortana thing.  Microsoft has been playing catch up the likes of Google and Apple for years and Cortana is just another example.  Despite what the sci fi magazines of yesteryear would have you believe people aren't ready to talk to their computer all day and whilst it makes some sense on a mobile device, on a desktop computer you just look and sound dumb.  Apart from the integration into your desktop computer Cortana hasn't got any new tricks that we haven't seen from Google.  It's just a whole lot creepier.

Finally there's Bing.  It's all over the place and I can't understand why Microsoft have clung onto their second rate search engine when it's been done already and much better by Google.  As for impartial results?  I wouldn't advocate using Bing normally but type in "The xbox one is".

Back to Windows 10 and there's help out there if you want to remove all the garbage and get back to a useful operating system.  The alternative is rolling back to Windows 7, which I'm seriously tempted to do by the way!  I just want a computer to run my favourite programmes on and do what I need to.  I don't need a machine to think for me and I want it to find me the information I need when I want it and not before.  This is Okay on a mobile phone, but it's not what I want on a desktop.

I wouldn't do that. If anything get a Chromebook, a mac will ruin your day more efficiently than anything else. I know, I have one.
30/07/18 The King
1

'Upgrading' from Windows 7 to Windows 10 - worst thing I ever did (computing related).

After many serious annoyances and irritations including missed deadlines for a magazine I edit - because Microsoft had taken control of MY hardware and was trying to install an update WITHOUT my permission ...

... installing Linux and ending my near 40 year use of Microsoft products - BEST thing I ever did (computer related). No more forced updates. Most of the software you will ever need is available FOC as Public Domain or GNU Public Licence. More reliable, less likely to be hacked and - if you decide to move onto a different piece of software - more likely to be able to use old data with the new program as it is likely to use an open format rather than a proprietary one.

I started with Linux Mint, but have recently move to the Long Term Support version of Ubuntu. There's a learning curve, but once you're past that you'll feel liberated.
12/10/17 IBrokeOutOfTheMicrosoftJail
0

kc is my nick

You might want to look at Linux. Google Ubuntu,Lubuntu(my fave) Xubuntu (popular) Mint these are all free alternatives.(you will need a blank DVD/USB stick though and you can try them out without installing anything, what have you got to lose? (well A DVD/flash drive I guess)
02/05/17 kc is my nick
1

I just said no to the pop up and then removed the update that keeps trying to force install. Then locked down Windows update so it has to ask me before installing anything and refused to let the little bastard reinstall.
25/10/16 Alexa
0

I too do not use Bing. However your suggestion that Micro$oft drop it because of Google is illogical. Would you suggest that Jaguar drop the XF because Rolls-Royce do it better?

If you hadn't installed it voluntarily they would have eventually done it without your permission anyway. Creeps me out, how bloody dare they! That's what happened to me and so I hear many others. Just take a look at their FB page. Among many infuriating things, messed up my photo uploading completely, (in that I couldn't do it as normal and had to figure it out anew THEIR way), put back everything I had deleted since 2008; 9000 images, all out of order and unnamed. A complete mess. Kept asking me 'would you like to see the album we've created for you?' NO, I'm not bloody 5 years old. Also don't want garbage like 'Candy Crush Saga' and the other useless tripe on Win 10. Another small thing - the date on the PC was changed to the US format which is annoying.

Long story short, after loads of digging online, got their tech dept on 'chat' and they took over remotely and reinstalled Win 7. You have a limited time to do this. Techies might be able to do it themselves but I couldn't.

They've had to do it twice so far - the picture file is at least back in date order and titles restored, but I still have to go through and delete about 4000 unwanted images. Document file is still a complete mess, with some files 'restored' in a format which can't be opened or opens in hypertext. Lost most of my 2000 bookmarked sites and saved email files, some of which are or were important for my business. They were supposed to fix a 'Runtime Error' notice which keeps freezing everything but didn't.

So yes, I got Win 7 back, which is an improvement, but there are things that are still messed up or lost. I don't think it can be made better so basically they have f*cked up my computer.

Just be aware that they WILL install this thing even if you say you don't want it. If you have anything important, back it up in anticipation of this. I should have noted all my bookmarked sites and saved email folders, which I stupidly didn't. Apart from a messed up computer, it really, REALLY infuriates me that they installed it without my permission, even though I said I didn't want it. If I could afford it I would go over to a Mac.
30/07/16 Kangarabbit
1

Yes, Microsoft has some crafty bullying tactics to make users do what it wants. It may not legally be bullying but the way everything becomes claustrophobic as you have no space to move around in Windows 8, this is the discomfort Microsoft imposed on you to get you to do what it wanted.
30/07/16 Messy Beast
1

Yes I completely agree because they have been at me constantly too but I resisted although they nearly got it loaded on me again by stealth but I resisted and blocked them and blocked them again and again. The reason i do not want microsoft 10 on my computer is because i did have it installed and it messed up my computer - I mean really messed it up and it took so much effort to get back to windows 8 which works fine for me. I do not care how much money he gives to charity he (the founder of microsoft) will never be able to buy back his soul - sorry Bill.
30/07/16 cathalbui
0

Like you I fell into the download much to my regret, I then I went back to windows 7, the past months have been a nightmare, I have managed to get 7 up and running but not as it was. I was quite happy before windows 10 and changing is not always the best thing.
30/07/16 micky
0

Why do people no longer respond to emails?

Teenagers under 16 may soon have a Facebook and Snapchat ban

Spyware and viruses slowing down my computer