I am a vegetarian.  No, I'm not going to shove my opinion that being a vegetarian is great down your throats.  I am here to open peoples eyes to how difficult it is to find certain products that are vegetarian friendly.

I know what you're thinking, there are lots of alternatives out there for vegetarians that are easily available.  Sure, if you're talking about meat alternatives, that is true.  Well, I was prepared to give up meat when I became a vegetarian, that's kind of the idea.  I was not however, prepared for the sheer amount of confectionery and sweet foods in general, I would have to give up.

Confused?  Well, at first, I was too.  You see many foods require to be spongy or soft or gelatinous, such as marshmallows, or the little jelly cola bottles.  Well the ingredient used by most mainstream companies, is a product called gelatin (sometimes gelatin).  It is a product made from boiling up bones, and skins and more uncommonly, hooves and horns.  The collagen seeps out from these materials and the water turns into gelatin.  Obviously there's more to it than that, but that is the basic idea. 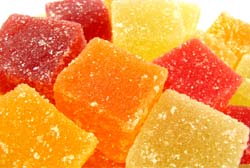 chocolate mousse - had pork gelatin in it...

Obviously this isn't acceptable to most vegetarians (and in some cases, some religions), and many unknowingly consume it.  It was just the other day I almost ate a chocolate mousse, only to realise that, this too, had pork gelatin in it.

Now, my main issue with this, is that there are many many alternatives to using gelatin.  To name a few: Agar-Agar, Biobin, Guar, Xanthan and Carob fruit.  These all have the same properties as gelatin, yet companies refuse to use these sources.  It wouldn't change the taste, most of them aren't hard to produce, and I'm sure they lose a rather large amount of customers because of it.

I eat meat but won't touch sweets with gelatin in them. Like you said there are plenty of vegetarian alternatives which are far better for you. I hate pork gelatin and the meat is an unclean meat that is not good for your body
26/08 colin
-1

Nishy97 said Flumps are vegetarian. They are not! They contain pork gelatin (yuck!). So don't eat them thinking they are safe, because they are not.
19/01/17 Silvertears0585
-2

I would have never guessed that sainsburys mousse had gelatin in it. I only looked at the back after eating one as I was curious (im not a vegetarian) and was shocked to see beef gelatin in it. I can deal with pork gelatine but being a Hindu we do not eat beef!!! It's the first time I have seen beef gelatine in something. Perhaps I should pay more attention to the labels.
16/06/13 Krish
-5

There is a market stall in Johns St "Bradistan" with a great selection of gelatin free sweets it is a great market. I am there a lot, I love the different foods from different country’s.
18/04/11 Boblet
-14

I am a vegetarian I feel the same way I guess when its gelatine in sweets I will eat it not beef or pork gelatin becuase I am hindu but especailly marshmellows becuase there is only one brand of marshmallow that is vegetarian called "flumps" but is there any other marshmallows that are vegtarian My email is nishal@live.co.uk please reply to this if there are any
18/04/11 Nishy97
-13

I agree that it seems to not make commercial sense to use gelatin when there are alternatives. You put off vegetarians which includes Hindus and most Buddhists and also, as a lot of gelatin is from pigs, Muslims.
20/12/10 anon
-18

What a ridiculous way to clarify a drink by using gelatin! It may be cheap and quick but so are many other things but it does not mean it is the best way.
Yes, I have to check the labels on juice drinks too, but so far, there is just one brand that uses gelatin in their orange drink.
20/12/10 Sandy
-9

There is a gelatin alternative and Tesco have been using it in their trifles so now it is suitable for Vegetarians. And yes, there are gelatin substitutes - Agar agar.

However, there are ways of making recipes(normally with gelatin) omitting gelatin and it tastes and looks better.
20/12/10 Sandy
-20

Sandy , it is put in juice to clarify it. I am afraid you just have to read all the labels if you are vegetarian. Tedious but necessary.
20/12/10 anon
-18

Companies who decide to use gelatin in their food and drinks are cutting out a huge number of consumers who may or may not be vegetarian.
I am not a vegetarian but feel that is such a cheap way of bulking food and drinks.
I came across an orange juice drink in the chiller section and found it had gelatin in it. Why? Why put gelatin in orange drink? I don't want ground hoofs and cow bones in my food ! Leave it for the serious meat eaters.
19/12/10 Sandy
-13

I agree with this statement about gelatin, I am a vegetarian and have been for 3 years and think they should use alternatives to using animals in all food products which aren't associated with meat. I don't eat meat because I dont like it and dont eat products with gelatin in as I find the idea disgusting, how can food producers be allowed to sell these kind of products? Also selling products with carmin/ e120 shouldnt be allowed either and if it is used should be made extremely clear on packaging, I didnt even know they used it in some food products until now when I read the comments on here today. I think people who do eat meat should be made aware of what is really in their food then I bet half of them wouldnt eat half the food products they eat now. I know that these food producers will be unlikely to inform the public of products which contain bad ingregients but I dont think it should be allowed and they should fund into alternatives so everyone is safe and eating things which are healthier and so people know exactly what their eating.
19/12/10 Maria
-6

Great review, I feel exactly the same, I have to check ingredients constantly on food as there are is always something horrible in them! Yoghurts and Mouses always have gelatin in them I bought kellogs cereal bars - krispy bars, thinking they were okay, checked the ingredients, pork gelatine in them! yuck! I cant eat sweets anymore or jellies or desserts in restaurants,
It my choice I know, but it can be so hard to find suitable products that dont have animals insides in them, everytime I go to a takeway place I have to ask if the chips are cooked in vegetable oil as alot of places cook them in beef driping, yuck! my stomach turns!
22/10/10 loopy
-5

Hi, bit on the fence comment on this but just to explain why companies still use gelatin..

while changing the content may gain some veg customers they'd lose more than they'd gain.