There is nothing worse than when a vegetarian, or worse still a vegan with holier-than-thou morals turns up to your BBQ.  What on earth do you do to feed them?  Do you source out some cardboard burgers or point them in the general direction of the salad bowl?  What do you cook for the vegetarians who turn up to your BBQ?

I know they think theyâ€™re being good and pure, not harming animals and being ultra civilized, but itâ€™s just downright inconvenient for the rest of us who have to cater for them and put up with their snide comments; wouldnâ€™t mind if it wasnâ€™t for the attitude.  Us meat eaters normally tend to hang out with fellow carnivores, but somehow or other when it comes to a social gathering youâ€™ll occasionally get a veggie with chip on their shoulder.  A chip that must not have been cooked in animal fat I hasten to add! 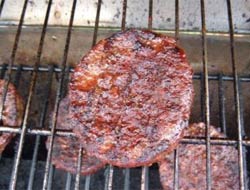 Theyâ€™ll try to convert the meat eating hordes to their way of thinking.  Eating meat is bad.  Itâ€™s not healthy and think about the cruelty and suffering to the animal.  Whatâ€™s the matter with them?  Have they looked at their teeth lately? Those pointy ones might be a bit of a clue, because I donâ€™t think the thousands of years of evolution were for nothing!

You can feast on the cheese roles and salad...

To heck with them I say, when in Rome do as the Romans do.  If you donâ€™t like sausages I'm not going to force you to eat them, you can feast on the cheese roles and salad for all I care.  You donâ€™t have to eat meat, but if I want to partake of dead flesh then I will and whatâ€™s more I will enjoy it.

Donâ€™t get me wrong, Iâ€™m not setting out to deliberately offend vegetarians.  After all, one manâ€™s meat is another manâ€™s poison or so they say.  Itâ€™s the ones that donâ€™t respect my opinion and criticise the fact that I eat meat that I have a problem with.

I recall reading some comment about this. The person said, why is it when you're having a dinner party and one of the guests is a vegetarian, you have to cook a separate meal for them but when you go to their home for dinner, it's vegetarian food and nothing else. They don't cook a meat dish especially for you.
16/08/20 Ray
0

Dylan Moran, a great comedian once said of someone he'd invited to a dinner party who turned out to be a (very fussy) vegan "here's a fork, and a torch. Bugger off and go see what you can find in the garden".
05/04/16 Kovich
2

Why on earth would anyone wish to invite one of these loathsome people to a BBQ, or indeed to any type of meal.
With their 'holier than thou' posturing and their sickly looking, privately educated foul offspring, their radical ideas on recycling and bicycle riding - they all have posh cars of course, but choose to parade themselves and their brood kitted out in cycling gear, usually riding in the middle of the sidewalk with daft hats on.
19/07/14 collar
-2

If they come to my house, I'll cook 'em meat, and they can eat that or nothing.
Precious, whining tossers
19/07/14 marmalade
-2

Babs and other veggies, man is actually an Omnivore

Not eating meat and veg is against your very genetic make up and claiming otherwise to justify your strange and non human behaviours is kind of weird.

However what you chose to eat is your affair. It only becomes mine when you try to force your opinions on me.

Therefore eat what you will but don’t force your views on me.

Or better still cook a vegetarian, I'm told they taste better becuase they were raised on cerial based feed.

That's as may be, but I don't mind vegans when they also respect other's dietary needs as well. My partner is constantly whinging about how much she has improved the diet around mine but doesn't mention that we did all the meat-eating. She eats and eats and eats after work on stuff we've made which she takes as her own, which everyone hates, and even her mother in law complained to us what a pain in the neck she has become, and what a holier than thou, unapproachable foodie she is! I could almost accept the snacking upon non-meats if she was being honest.
22/02/14 collar
-3

Mike Tyson has been a vegan for some time now and, although I am not a fan, no one could ever call him "scrawny". I dare you to call him scrawny to his face!
21/02/14 Taliesin
3

The problem is, all the male vegetarians appear timid and in poor physical health - dare I say scrawny? And the smell emanating from their digestive systems is truly horrific. Youngsters need their meat and protein to build healthy bones and muscles and to fight hangovers!
21/02/14 collar
-1

This poster obviously has no idea about human biology. The digestive tract of a human is the same as a herbivore, in other words, HUMANS ARE NOT MEANT TO EAT THE FLESH OF A DEAD PURIFYING ANIMAL. No wonder cancer and other dis-eases are so rampant in our society!

Being a vegan I don't get invited to too many bbq's (wonder why...lol..) but have in the past gone to a BBQ where the host was great with the vege choices and it was not too much trouble at all.

One simple solution: If vege/vegans are a pain at BBQs, then just don't invite them, or better still, why not just buy one of those disposable BBQ's so that all their food can be cooked separately? It would also show you have some measure of intelligence, thought and accommodating to other dietary choices. The real problem here is lack of imagination and care of their guests, why is it not looked upon as a 'challenge to their creative cooking skills'?

The sooner people wake up and realise that the meat eater is the 'odd one out' and not the vegetarian/vegan. Oh, and by the way, not all of us go around preaching and 'tutting', isn't that the job of the meat eaters, to continuing make insinuating remarks about food choices other than theirs? These are classics...."go on, bet you really want a bit of this steak...." "I hear that bacon is the one thing vegetarians still crave....bet you would love a luvly bacon sarnie right now...." "Go on, eat the meat, it won't kill you...." "why do you have to SO awkward, why can't you just be like everyone else..." and THE CLASSIC OF ALL TIME...."But...where DO you get your protein from?"..............LOL!
21/02/14 Babs
0

Me too.really sorry to hear about your cancer.
just remember to stay really positive but i do have to say as a regular barbecue cooker i know how annoying it is to have to prepare more food for a gathering when youve already got enough on your plate.
once i had a bbq and my girlfriend invited one of her friends who is a veggie by choice. She had only been one for about 5 months and she started,preaching to my guests why it was a bad idea to eat meat and why they were all effectivley murdurers.
hasnt been invited back since
11/08/13 jamieawesome!!
-4

I agree with dana. It is ridiculous that you invite a veggie to a barbacue but find it unquestionable that you should cater for their dietary needs. Especially if you are in danas position, where veganisim or vegatarianisim is a medical treatment.

Well said " idiotfree" we are not all worthy, tee total,animal activists.
infact to even suggest that is idiocy
11/08/13 dana
0

Moving house is stressful with all the packing etc.

Why do women want to loose weight all the time?