Are the Police just sitting around wasting their time by handing out petty fines for less serious crimes?

I am so so fed up of living in a world where people think it's okay to go around playing the 'gangster'.  Recently for example, (you will hear on the news) there was a drive-by shoot-out in Manchester (again) where a car was sprayed with holes and two houses on a nearby street were caught in the middle.  This was at 6pm in broad daylight with lots of children including my own playing nearby.

The fact of the matter is, the police know exactly who was behind it and they know the reasons why but the way our legal systems currently work they state insufficient evidence......  no case! 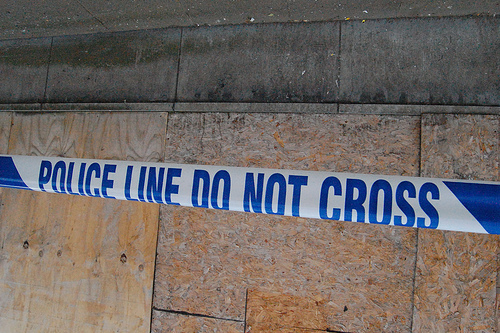 The crime scene of the first incident is at the entrance to the cul-de-sac I live in, meaning I am unable to drive my car to my house as it's all cordoned off for police investigations and round the corner where the other one happened it's the same.

It's a disgrace I have to tell my four year old that sometimes there are naughty men about and that he has to stay inside and isn't allowed to play in the garden.  A kid shouldn't have to ask questions like 'mummy why are the police sellotaping up the road?' Fortunately nobody was hurt, but it's usually the innocent that do.

The police have issued a statement saying that incidents within this area are rare.....  what is more rare is the Police actually arresting the culprits for these crimes.  They stop and search enough innocent and ordinary people on the streets but never seem to get the trouble causers.

The sentences imposed on these people when they finally do get caught is not enough to make people not want to behave this way and the amount of violence is increasing.  This making people want to carry a gun or a knife as they feel it will protect them.  This world has gone mad, the Police haven't enough powers and the punishments aren't severe enough and so we continue to be afraid and be ruled by these idiotic men who need to stop spreading misery, trouble and drugs about and get a real job and contribute to society.  Police should have more powers.

Not in Manchester, but is it not time to reintroduce the death penalty to the scum when found guilty that has infected the UK streets?
20/05/20 Jethro
1

Tasered in the testicles, singed with a blowtorch and threatened with a gun to his head - the kidnapping of a 'major drug dealer' for a £500k ransom.

Poor man, just because he was a major drugs dealer. He will surely be awarded compo by the do-gooders.
11/01/20 Jethro
1

I know this did not happen in Manchester but I'm sure similar things have.
Seeing as the justice system seems to have failed and thugs and criminals are escaping punishment on a regular basis it is no wonder our policemen and policewomen are depressed. I wonder how much longer it will be before police forces starts to turn a blind eye to vigilantism. I also know the top echolons within the police establishment and government state that this will not be tolerated, but it will be a very hard thing to enforce on the ground. With the weak and unrealistic sentences being handed out by these failing courts and judges they are promoting anarchy within the UK.
28/11/18 Jethro
8

Burglars caught stealing presents from under a Christmas tree