As we are all very much aware, the United Kingdom has been having its fair share of bad weather this week.  Psychology studies may show that anti social behaviour occurs less during the winter months than in the summer, but what they have failed to look into is an issue which affects most of us: children and teenagers throwing snowballs.

Now, I'm not talking about kids throwing snowballs for fun, I'm talking about the older ones throwing icy snowballs at other people's houses, public transport and at passers by in public places to cause trouble.  Something needs to be done about this anti-social behaviour.

There is nothing more worse than living next to a 'hot spot' area such as a public park or bus stop where this type of behaviour is just waiting to happen, and what can we do about it? Absolutely nothing!

They are always well-hidden either by obstacles or under their heavy winter clothing, and they are always too quick on their feet to catch.  The police won't do anything about it - throwing a snowball is hardly a crime in comparison to that of a brick being launched through your window, and we cannot take photographs or videos of the incident because this is against the law. 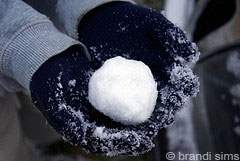 So what are we supposed to do?  Are we supposed to just sit back and let this behaviour continue until the point where bricks are being launched at us, or should we be making complaints and phone calls to the local schools and public transport operators?  Don't count on it, nothing will be done.  So, just whose responsibility is it exactly to make sure that these children and teenagers stop using snowballs as a weapon?  Did their parents teach them that doing this kind of thing is okay?

Of course, shouting from your window or chasing them down the street always works as this will remind them to bring a sledge full of snowballs next time and maybe even some tough cronies because they'll know what to expect.

What is the root cause to all these? Clearly, the fault does not lie with the children - they are children, after all. So, it must go to the next level up - the parents are to blame. However, why is it that there seems to be an increase in the number of scumbag parents unable to rear their children?

Surely, the welfare state must share the blame? It has led to increasing numbers of parents having children when they are barely more than children themselves. They do not have the parenting skills or social skills necessary, often because they skills have not been reinforced in a working environment, alongside the skills that arise from being financially responsible for running a household and feeding the family.

Thus, a cycle of poor parenting leading to future generations of poor parenting begins, and the UK now has a major problem on its hands. It's going to get much worse before it gets better. And the result is seen all over the country - hard-faced parents lacking the basic social graces, rearing kids who have no respect for others outside the family, leading to misery for a countless number of people.

Where we used to live, on a council house sink estate, kids as young as (by appearance) 7 or 8 regularly lobbed stones and bricks at the passing buses, and if you told them off you would be met with a barrage of foul language and/or the parents would put in an appearance and threaten you.

No disipline and no fear of authority, parents and children, bloody animals, just part of the underclass.
14/06/12 Stalag 14
-3

I know this gripe is about kids throwing snowballs but what about those who throw conkers at windows, vehicles and even people and animals? Recently, in the news a 15 year old boy has been jailed for stabbing a student after he was told off for throwing conkers at him and his friends. My friend has had conkers thrown at her and her dog by three 12 year old boys who hurled abuse at her when she told them off. I fear there are kids even in primary school who do this as well. I'm not surprised that schools have banned conker fights in the playground. If little kids these days are let to use conkers as missles on each other and other things then why give them in the first place? I fear the conker throwing kids are getting younger and younger and soon the next time it won't be long when you hear of kids as young as six years old possibly being accussed of throwing conkers at adults. Am I the only one who thinks this? I want to know if you people have seen kids as young as six years old throwing conkers at vehicles, windows, people and animals. I swear kids under 10 are being overlooked when it comes to throwing conkers at everything in sight and being wreckless towards others and property.
13/06/12 Angry Autistic Female
-5

I see why that gets annoying, but police will certainly do something about it-I know people who get stopped and searched for alcohol when they're 14, and who get followed home by police cars at night for no reason. I'm sure if being in a group with more than three people is a gang, they can do something about throwing snowballs. The first answer was right-we have nothing to do with our friends now other than walk around the streets. Our parents don't want us in the house (even if we're quiet and don't make any mess) and there's nothing for us to do outside, so we get bored. I don't throw snowballs at buses or anything, but I know why some people do.
21/04/12 Holloway
-2

The biggest problem with kids nowadays is that they have nothing constructive to do with their spare time. theyr`e bored & their parents don`t want them hanging around the house all day getting on their nerves, so they kick them out, & then they wander around getting into mischief & annoying people.
31/05/11 hairyfairy
-1

Instead of "debating" whether or not to call the police , why didn't you got to his assistance?

I don't understand why everyone is so passive these days and so afraid of children. It's why some of them , a minority as most kids are fine, get away with whatever they like.

They think they are "untouchable". I am not talking about hitting them or doing anything physical, just telling them to stop and telling them why.
24/01/11 Murchison
-9

We live in Netherton Dudley and witnessed a group of highschool students attacking an elderly man with snowballs, throwing them hard. We debated whether or not to call the police. Wish we had, now. I agree, throwing snowballs for fun is one thing, but when people are injured and frightened, that is definitely anti-social behaviour and should be reported. And I agree with you, also, greybeardloon.
24/01/11 Allison
0

Mate if you think it's bad now,just wait a few more years.What will be happening in the future will make the present seem like paradise.I warn you that there will be mass murder of the older generation, especially the baby boomer generation, by the kids who are growing up now.This is a warning, not a threat.I am not condoning it, just predicting that this will be the case.Authority will be completely overwhelmed.By mid-century this country will look like a wet and misty version of Afghanistan.The cause will not be political or religious, it will be mayhem and anarchy for the hell of it.
31/12/10 greybeardloon
-15

One of the really bad things is this:
I live near a large National Trust property (Lyme Park, know it?) and to get in, you have to drive down a road of about 2 miles. In the summer this is lovely, as you go past very beautiful, scenic hills, very nice, lovely stuff. However, in the winter, when there is snow, groups of children from the ages of about 5 to about 15 will stand along the road, with a large pile of snowballs by their side to throw at motorists. This is especially dangerous as:
A. Lyme Park is very popular with parents, and at least 20% of their mind is on their offspring.
B. Bad weather makes the roads hard to drive on, obviously.
So you can see, this is dangerous. I know one lady whose husband had to spend 3 weeks in hospital because he spun off the road when this happened. My husband encountered this. He got out of the car, furious, and found the children's mother, holding a video camera, chortling! Well, you know what he did? He grabbed the video camera, and threw it down the hill, and gave the mother a lecture.
That's why I married him!
30/12/10 Indignant Rambler
-8

Funily enough, I switched on the radio this morning and it answered all of the questions posed in this gripe:

An elderly woman told of how her car was swamped by a group of youths shouting abuse at her and throwing snowballs at her car who refused to go away. She had a nine-year-old grand daughter in the car and she threatened to take a photograph of the youths involved on her mobile phone if they did not leave, then she would phone the police - which she did.

A police officer then spoke of the incident and said that it is not silly to phone up the police, or a waste of their time because you are being targetted by snowballs - he also explained that there are two types of snowball: Snow which is soft, or an Ice Ball which could cause a black-eye. He also explained that if a child under 10 throws a snowball on purpose at a police officer with malicious intent their parents are given a warning, if a child over 10 does this they are charged.

1) Yes, you are allowed to take photographs.
2) The police will not think you are stupid for ringing them about 'snowballing'
3) Yes, you can get in trouble for throwing a snowball at a police officer.

Depends where you live. If you are unlucky to live in a rough council estate, sure enough, all the hoodies, hooligans, b*tches, chavs, asbos and oats, will use every opportunity to disrupt our society.

Snowballs can be observed as harmless fun, but anti-social behaviour is instantly recognisable. I don't think we need to go into all the social factors. If its a repetitive nuisance - it's antisocial behaviour. If it's a thing which has only happened once, ignore it and move on.
21/12/10 Kat
-3

Get a grip, Gainsborough Lad. Have you any idea how many incidents your local police deal with each and every day?

For an average county Force it is around 1,000, so they simply have to grade them in order of priority. Snowballing, whilst irritating, hardly ranks up there, does it?
20/12/10 Bronty
0

I know what you mean, hard snowballs a pain, but still - didn't we all do it, and aren't there more important things. However, I did get a hard snowball thrown from a motorway bridge and hit the windscreen!! Good job it didn't have a stone in it.
19/12/10 Bagpuss
-7

Clearing snow from the pavement makes it worse