I'm sick and tired of getting stuck behind a slow lorry in the morning on the way to work, and those Tesco delivery trucks are the worst!  Actually its not so much the lorry that is the problem, rather the queue of cars poking their nose out to have a look every five minutes only to realise that they can't do anything about it.

I know some car drivers get fed up because they can't get past slow moving traffic particularly lorries and tractors.  As you might have guessed, I ride a motorbike to work and for the most part would probably just shoot straight past the lorry as they go so slow and we can accelerate quickly.  Unfortunately it isn't that easy when there is a long queue of cars behind them.  It kind of reminds me of big metal snake with the lorry being the head and the cars making up the body and tail.  What a nightmare, and I'm sure its no picnic for the people trapped behind their cars.  It would be really nice if a few more of them kept an eye out behind and moved over though. 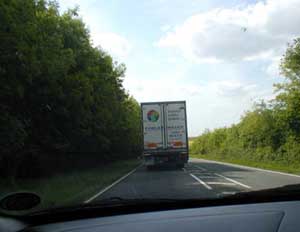 I had this crazy idea the other day about banning all the HGV and farm traffic from the road during peak hours, say between eight and ten in the morning and then four to six in the evening.  Okay it probably wouldn't be very popular with the truckers or the haulage companies, but just imagine how much easier it would be to get to work in the morning.  All we'd need to do then is remove the school run mum and hey presto! - congestion problem solved.

No seriously, probably not an ideal solution but with the rising cost of fuel, more cars and more toll roads it will be interesting to see just how things are going be in the future. &nbspI doubt that there is anything that can really be done about growing congestion problems not just in the cities but on the suburban and country roads as well.  At the end of the day people need to get to work and the shops need to be stocked with goods.  We'll just have to live with the snakes in the morning!

I drive all over the country for work in a car, as pointed out by most lorry drives not doing anything vital for the country. I work for a large retail company ensuring that their stores stay open. I don't mind following lorries on A roads, I give you extra space at roundabouts, I get annoyed watching you do a 3 mile overtake on the only section of dual carriageway in a 40 mile single stretch of road, but I will more often than not flash to tell you to pull out. No point rushing past you to catch the next lorry up. You could say I have given up getting annoyed,quite like my blood pressure normal. There is one thing that is really getting my gripe, and following one nasty encounter with a truck, I now film my journeys through motorway road works. I rely on driving for my job, I cant afford to collect points speeding, I am tracked so my speed is monitored just like lorries. So could all of you law abiding lorry drivers answer me on thing: Why do you insist on flashing your lights, driving almost on my towbar, overtaking me when I drive at 50mph through speed restricted areas at 50mph. Your tacho doesn't pick up on the fact that you are speeding, fine but don't bully me!
28/09/15 assiewench
1

yes you will just have to live with it mr biker man or woman? im a artic driver a car driver and a biker. lorries are here to stay love it or loath it thats life my friend. i dont know what bike you ride? i ride a xjr1300 yamaha and it have enouth grunt to pass most things quickly. stay safe out there and remember when you come up behind a truck or any large lorry or bus etc. if you cant see our mirrors we cant see you bare that in mind before you overtake us.
10/05/14 trucker biker clayshooter
0

Now I could go a little faster, break the law a little, but you can rest assured that if there is an accident the law will check MY tacho and tell me 'oh dear driver, you were exceeding the speed limit for a vehicle of this class and you a professional driver who should know better, Jail time!'

So the bottom line is this. If you are unhappy about sitting behind me at 40mph don't whine to me, contact your MP, MEP and ask them to lobby for an increase in the speed limit because THEY are the people who can do something about it. Until then I'll stay safe and within the law.
30/04/14 High Cube
0

So do you shop in Tesco? Ban lorries at certain times of day and you will soon see the price of your weekly shop go up rapidly! Do you really think the haulage industry will bear those added costs of missing deadlines and paying drivers more for sitting around until rush hour clears?

I've got a crazy idea that might actually work! Why not set off for work a bit earlier knowing that there will be a lorry en route, Plan to get to work at the speed that the lorry travels at (40mph on a single carriage way), and you will even save some fuel too by travelling at a sensible speed.
22/12/13 Tiny
4

I'm a wagon driver and there's nothing more boring than doing forty mph but sory to burst your bubble but it's the law and you talk bout congestion, if all drivers were to drive correctly it would safe a lot of congestion and even accidents! The truth be known I think wagon drivers should get a lot more respect, we do a hard job transporting essential cargo all over the world! We have very strick laws to follow and the penalty are high! So you to slagging wagon drivers off seem just the type who lane swaps with out considering anyone but yourself! Selfish and ignorant, it's drivers like you that should be made to stick to certain routes at certain times!
17/11/13 Driver
2

HGV drivers are the worst. Rude and selfish at best. Pull over - respect the speed limit - and before you all remind me you can only do 56mph - yes I know - so remember this when you are in a 50mph zone and don't tail gate me! Because if I have to break YOU will cause yet another accident. Every time there is a crash its almost certain there is a HGV involved. Retrain - get some brains or get off the road!!!
03/07/13 M62 for life
-2

Buses are also limited. 50mph national limit on a single carriageway, 60 on a dual carriageway and most are electronically governed to 62.
03/07/13 Brighton driver
-1

I am a hgv 1 driver and yes the law is 40 mph on single carriage ways but most do a little more.

I also notice Tesco & other supermarket lorry drivers like to build up the traffic and go slower to build up the traffic, i sat behind one doing 33 mph. Although speed limits are not targets but we had around a mile of traffic behind us. With a big logo every little helps Tesco it would of helped if the driver pulled into a layby to let the traffic by periodically. SHAME ON TESCO DRIVERS BE MORE CONSIDERATE TO OTHER ROAD USERS , EVERY LITTLE HELPS.
26/03/13 gregz008
-2

It's not the lorry drivers at fault, it's the law. Yes, 40mph is safer for HGVs on CERTAIN roads but for goodness sake not ALL A roads. EU meddlers dictating again! If an A road is straight and wide and open for Pete's sake let them increase to 50mph and reduce fuel consumption, pollution and danger produced by the bunch behind.
06/02/13 Yog
-1

I can perfectly accept that a lorry driver is limited to a speed limit and if I'm late its my problem I should've left earlier. However, what I can't accept is the lorry that accelerates when I try and overtake because the road is straight (not to car drivers this applies to you too). Also, the roads I drive mostly state they are unsuitable for HGV's and yet the other day I followed a lorry down one such road and it wasn't using it for access. C'mon mate that's my shortcut!
19/07/12 HFDGAL
-2

The lorry should be doing 40mph max, the car should overtake this safely and quickly. If the car is not overtaking PULL BACK a little and allow the next car/motorbike to overtake safely. Don't blame the lorry (don't blame anyone actually, we've all be there) but let people make progress if you don't want to.
02/06/11 Deano
-23

Wile reading most off the winging comments from us car drivers about slow lorries on our roads, lorrie drivers always make the same comments. The speed limit for hgv lorries on a A ROAD IS 40MPH.Remember it is a heavy goods vehicle which take longer to stop .what happens on our motorways when we have two lorries side by side WHAT happens about the argument about stopping on a wet road driving at 60 mph? cant have it both ways and I am all for road safety .
22/05/11 Dingo
-6

Yea I know what you mean about the lorries holding up car drivers but what actually makes up the traffic? The hundreds of cars on the road, or the odd lorry now and again? Anyway,you're not stuck in traffic, you are the traffic. Motorcycling is the way forward so if you've got one of those, stop riding like you don't know how to and ride it like a man!!
03/04/11 p
-14