I live in a small town where the pavements are quite narrow.  Recently, I saw a lorry with a skip on the back which was parked on the pavement.  The driver had gone off and left the engine running.  I wanted to cross the road and would usually have waited in the exact spot where the lorry was parked.

Finding my way blocked by the lorry, I had to step out into the busy road, negotiate my way round the front of the vehicle, which jutted out into the road and then make my way to the traffic island.  By the time I had got this far, only half way across, Several cars were driving towards me quite quickly.

I was worried about getting hit by these cars, as they were definitely doing more than 30 mph!  They didn't appear to have any intention of slowing down.  Also, they may have thought I was going to go round the lorry and continue on the same side of the road, rather than actually crossing. 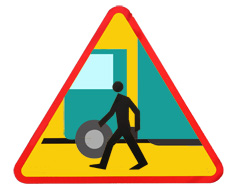 Eventually, I got across the road and noticed several other people having to risk being run over by a passing car just to get round this lorry.

I waited for a while and saw him finally return to his vehicle 15 minutes later.  During that time, around 10 people were inconvenienced by his lorry which was parked where pedestrians would normally cross.  He obviously wasn't particularly concerned for the safety of other people.  I'm just tired of risking my life because idiots choose to park on the pavement with no consideration for anyone else.

Please give me a clue Scammel? Why do you want to bloody well annoy people? Who gripe about dopes.
26/06/11 Boblet
6

I am a lorry and my driver also parks on the pavement and leaves my engine running, there is a reason for this.