Lorry drivers, how rude and selfish can you be?  When another very slightly faster lorry is overtaking you, why do you have to stay side by side at your cruising speed instead of just throttling back a bit and allowing your "competitor" to pass quickly?

You see this happening all the time on the motorway.  You are driving to your destination minding your own business, then suddenly you hit a load of traffic, you look just ahead of this to see what the problem is and nine times out of ten there are two lorries side by side in some kind of snails race to the finish line.

The result is that the cars coming up on this obstacle have to filter by in single file on the outside late.  If youre really unlucky and its only a two lane dual carriage way you can be stuck behind these two duelling HGVs for quite a few miles. 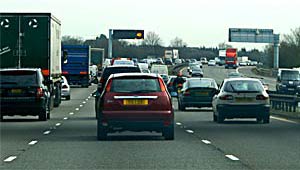 Why are they so selfish?  Im not sure who is to blame, be it the overtaking lorry that cant go fast enough, or the one on the inside that is just being a selfish pig by not letting the other one pass quickly.  Yes I know we all need the goods that lorries transport every day, but Id rather not follow them up the motorway to their final destination!

This slow overtaking needs to stop as it causes bottle necks on our already choked road system. Two lorries attempting to overtake when neither of them has enough speed effectively creates a rolling roadblock.  This seems like a very dangerous practice to me and should be made an offence, just like undertaking!

I use the A14 regularly and heading West between Kettering and the M6/M1 junction there is a long uphill stretch with clear signs stating vehicles over 7.5t are not allowed in lane 2 between 06:00 and 20:00. On countless occasions this rule is flouted by lorries who crawl past other lorries up the hill. I adopt the same approach as Alf and lift off in front of these idiots when I pass. Yesterday I had both the unindicated pull out AND incorrect use of lane 2 on this stretch for which the arrogant idiot received a good 'Alfing'. He probably blew his main beam bulbs with all the flashing he was doing. Will he think twice next time? Maybe.
08/04/16 Jimbo
3

Lorry drivers seem to have become more selfish and arrogant in recent years. One really dangerous practise is pulling out form lane 1 into lane 2 on a motorway and indicating after starting the manoeuvre seemingly deliberately as a car is just coming up to the rear of the lorry. My simple solution is not to flash my lights or blow my horn. I simply wait until traffic has passed in lane 3, overtake the offending jerk and gradually lift off the accelerator until I am doing 1-2mph slower than the lorry. After much light flashing and horn blowing the lorry has no option but to pull back into lane 1 at which point I accelerate away, point made.
08/04/16 Alf
1

I agree with everything you say. I travel daily on motorways and the pig headed attitude of some lorry drivers is unbelievable. They seem to be involved in more accidents, cause more accidents and completly ignore other road users. Whether it's poor training, driver shortages or lack of aptitude, I'm not sure but I find the general lack of awareness alarming. They travel far too close, cut across lanes and drive with very little respect. I've seen overseas drivers cut me up, probably because of limited vision, they are sitting on the other side of the vehicle. Completly miss read roundabouts, even drive over them entirely.. I know we have a real shortfall of HGV drivers in the UK, so maybe if salaries increased, then so would driving standards, in that you'd attract a better quality of driver ?
02/12/15 Nobby
0

technohippy...what sort of person are you? You cant say that about someone else's lorry- wagon, actually you shouldn't be saying that about any driving mode thingy. Would you say that about a wheeled car? Please answer that please. I am intrigued to say though, it's a pity you haven't had more driving experience otherwise I would have reported you to the police, you bad, bad wheel-man.
Yes its very very annoying to be stuck behind an overtaking lorry-wagon all day long, but its the driver's fault, not the lorry-wagon. Why dont you report him to the motorway police or something? Why did you feel it was necessary to moan on here?
Maybe you were at your wits end, but still do you really feel that was a justifiable action? What if the lorry-wagon had been carrying vital ingredients, and it had had a long miserable journey already? At the end of the journey it doesn't matter, what it was carrying... I hope the big lorry-wagon driver man with his 2 trailers keeps his job.....now don't say that lorry-wagons transport vital loads for Collar - Collar needs for nothing, nothing at all - coo - there goes my head again!
26/10/14 collar
0

I see this all the time

its got to stop - just wish everyone would take care - after all aren't we all just trying to get somewhere ?
16/07/14 GenesisDevice
0

Tempting I'm sure Fred, but potentially dangerous - if the driver is texting or eating his snap he may well go into the back of you.
16/07/14 marmalade
0

Do you want to be driving at 50MPH with a lorry 2 yards behind? Just take your foot off the accelerator and let your car slow down until the driver behind either a)gets the message that his behaviour is unacceptable and drops back or b)manages to overtake you. Either solves the problem. I would rather be hit at 20 or 30MPH than at 50MPH.
15/07/14 Fred E
0

At the risk of repeating myself G.D. A while back I left an old super 8 camera on my parcel shelf, for no particular reason. I had emptied some junk from my boot & it was just left there poking out of a box. A while later whilst driving also on the M62, very little traffic passed me. I can do 100 plus & will still get tailgated on the 62, on this occation I was only doing the speed limit. It was weird, the odd car crept passed, but no wagons. I believe it was the super 8 that did it. So good luck to you my man. One only has to view the police on youtube to witness the power of the camera, it is like salt on a slug.
15/07/14 boblet
0

Just driving along the M62 motorway through Yorkshire - 50 MPH zone with speed camera's - HGV 2 yards off of the back of my car where my 15 year old daughter is sitting. asked her to film the idiot and she obliged. Will be making a DVD and sending it to the company the driver works for.
15/07/14 GenesisDevice
-1

Just got back from Harwich to North Wales and but for these selfish lorry drivers the drive would have been most pleasant. I found that the majority of them just indicate and pull out; car what car? I'm bigger than you so you brake little car. Speed limits through road works on the M6, what speed limits? I'll drive 2 feet behind you and push you to go at the speed I want you to go at. Oh, I'm in the middle lane and overtaking you and I want to take the next exit, so I'll just indicate left and hope you see me pushing you over on to the hard shoulder so you will brake and let me in, so I won't miss the exit. If only we had a decent rail network we could get half these selfish lorry drivers off the roads and make them a safer place for the little man.
23/05/14 Billbach
1

I have been driving artics for 26 years now. And the level of driving skills amongst all types of road users are getting worse every day. Hgv,s are limited to 56mph in the uk by law. Some companies limit there vehicles to 50-52-53mph there choice. And coach drivers/bus drivers are limited to 65mph by law. I agree some drivers of large vehicles can be selfish. But most of us have good judgement and drive accordingly to keep the flow of traffic going. Its just the odd one or two that make us all look bad. The same as you get with other road users im sure. I have seen a lot of crazy driving in my years of driving and its from all types of people with all types of vehicles.
10/05/14 trucker biker clayshooter
1

It isn't about having a big lorry or any form of large vehicle on the highway it is about having respect for fellow drivers and road users.

People are quick to collect points and things but you wouldn't try and knowingly tailgate these small cars in a position likely to damage their bumpers or a person's personal safety just because it is slowing you're progress.