Recently I attempted to travel into work using public transport, not as a moral stand against gas guzzling cars (my little 1.1l  Citroen could hardly be called a gas guzzler however!) but because I had an all expenses paid company function that evening and I didnt want to leave my car in the office car park overnight.

... if that bus had stopped instead of sailing past

I consulted the bus timetable, selected a suitable departure time (7.22) and looked forward to letting the bus driver cope with the stress and strain of my 20 mile drive into work for a change.  I arrived at the bus stop at 7.15, in plenty of time to catch the 7.22 I thought, well it would have been had the 7.22 actually turned up. No matter, there was another bus scheduled for 7.34, I could get on that one and still be at work on time, or I could have been if that bus had stopped instead of sailing past the stop completely empty!!!  O.K. then there was always the 7.42, I would be a bit late but nothing too much to worry about. At 7.38 two buses arrived at the stop, I got on the front bus, paid my 2.30 fare and sat down. At this point the driver of the bus behind pulled up beside my bus and after chatting with my driver it was decided that the second bus would leave straight away and my bus would wait 10 minutes or so.  No one on my bus was given the option to move onto the other bus. 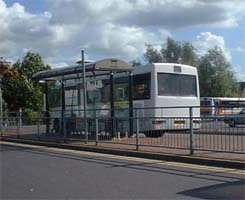 At 7.48ish my bus started its leisurely trip around the local neighbourhoods picking up passengers.  The delay in departure meant that the bus hit the main road out of town at peak time and the newly installed traffic lights on the A34/M40 junction served only to delay my progress even further.  The one and only high point of the trip were the bus lanes that enabled my bus to sail past the queues of cars making their way into town.

My journey was then fairly trouble free but for the bus having to pick up several English language students who (a) didnt know where they had to get off; (b) seemed confused by English currency; (c) had travel cards that they didnt know how to use. I arrived in town at 8.45, half an hour late for work already and then waited 15 minutes for a connecting bus that got me to work at 9.15.  So a 20 mile trip took me 2 hours, I could have got into London in less time!

I for one will not be swapping my un-environmentally friendly car for public transport until it becomes cheaper and more reliable.  I arrived at work more stressed than if I had driven myself in.

Pay as you drive to save the planet: Rishi Sunak considers plan to CHARGE motorists for every mile they drive to fill £40bn fuel tax hole.

Covid epidemic and the billions it has cost will result in measures such as this. Also, measures must be taken to lessen the amount of cars on British roads. This tax and many more will be needed to fill the UK's depleated finances. Get ready for some real wallet pain.
16/11/20 Jethro
0

You should try living round my way ( London E10) the bus drivers around here are surly, foul mouthed, & lazy. Many times Iv`e gotten on a bus to a certain destination, only to find that the driver decides that he doesn`t fancy going all the way, 7 stops his bus, & just sits in the cab drinking tea or have a sandwich. If only I could afford to run a car!
05/04/14 hairyfairy
0

I tend to walk everywhere, or take the tube if the journey`s too far to walk. Buses are infrequent in my area, & the drivers are grouchy & bad tempered, then there`s screaming kids & the odd drunk or mentall patient creating havoc. I wish that I could afford to run a car.
14/10/12 hairyfairy
-4

The cost for two of us to travel by bus into town & back - £4.80 To travel by car 50p + £1.80 to park for a few hours. Can carry all our shopping in the car, it's clean and it's comfortable. We have to walk 1/2 mile to bus stop, bus is crammed full, dirty and smelly - as are some passengers. We can go and vist my parents by car at a cost of about £15 and it would take 1.5 hours. To go by bus, it would involve 4 changes each way (4 hours) and an overnight stay somewhere - and it would cost at least double the car cost. There's no logic to using public transport.
19/01/11 Westone Babe
13

I know exactly what you mean, if I take the 10 mile journey from work to home in the evening on the bus it's approx an hour and a half, if I get the motorbike out I can do the same journey in 25 mins. Public transport has got a long way to go before you'll find me using it for something I depend up like getting to and from work.
22/11/10 Chris80
-12

I cannot get across my city to work on public transport - not without being REALLY late for work which would cost me my job.

One reason why I eventually learned to drive at the age of 40 - I had always avoided it as unnecessary until I considered changing jobs.
30/10/10 ajp
-17

Tony in Bicester, have you ever asked the company if you can travel for less? Firstly, buses just after midnight count as the previous day in most places, so a day return would still be valid. Secondly, a weekly pass is always cheaper than five days worth of singles or day returns - I bet you could knock at least a third, if not a half off what you are paying.
13/10/10 Frustrated
-26

From many a bad experience on buses and trains (mainly the buses not turning up and having to wait around in the cold and wet for the next one), I think I'm getting to the point where I'm becoming completely against public transport!
My car has always been and always will be my favourite means of transport.
Maybe when they clean up public transport, make it more reliable, cheaper and collect me door to door like my car, I'll reconsider!
01/09/10 Parker
-1

Bus drivers, try to convince the passengers that you're late because of traffic by keeping your voice low when you pull up next to another colleague and exchange several 5 minute jokes.
31/05/10 Chris.
-1

right who's been late for work recently........oh theres Joe, we can drop him in the streamlining exercise......I know hes a good worker but somebodys got to go and you cant get rid of the others they're my pub buddies.......right joe no driving licence youre pumped....you have hit the bin.....youre in the trash.....just make friday your last day.....no hard feelings buddy....just the economy...am sure you will find something (wish I'd bought a car)
06/05/10 you are pumped
-14

" ''nugget'' you forgot one item off the list. When the bus is late which it will be about twice a week in my area I lose money through missing work which is average 1 hour late. In my area the average hourly rate is £8 so let’s recalculate

"Why do you not have a car- get with the times."

What a shallow and thoughtless attitude, and what a pointless and negative comment.

Why do you not have a car- get with the times.