I must admit my job wouldn't suit everyone as I'm employed as a Pathologist's assistant and also work in the mortuary of a local hospital.  The thing that really gets to me is the fact that people think I must be odd to do such a job.  Why is working in a mortuary so strange to them?  A pathologist's assistant is a job like any other, you go to work, you do what is required of you and then come home at the end of the day.

I suppose its only human curiosity really...

I try to explain that someone has to do it, and since I have now as I've done it for years it doesn't bother me in the least.  The job itself is clinically done and there's nothing ghoulish about it in any way whatsoever.  If for instance I'm in a company and my job comes under discussion, there's always the same old questions, for example "What happens to any artificial hip joints or pace makers, are they removed and used again?"  I suppose its only human curiosity really. 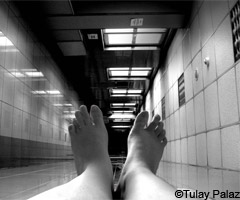 I suppose any of the emergency services i.e. Fire, Police or Ambulance etc. have all at sometime or other experienced this.  It would appear that someones misfortune is someone else's interest, for example: why do drivers slow down to look at an RTA on the opposite carriageway, or why do they watch a building burn when they know there's someone inside?  It can only be described as a natural inborn inquisitiveness. In cases like this the emergency services are always at the sharp end and meet these tragic events head on.

These people can only be admired as they don't know what gruesome site is waiting to greet them whereas in my job as a Pathologist's Assistant, I know exactly whats waiting for me.  I more or less put things back together again and make things look more presentable.  I have often thought that if people could see the results of a fatal road traffic accident caused by their stupidity, would it make an ounce of difference - I fear not though...

It would be interesting to know if anyone else has experienced this kind of thing due to the nature of their job or their profession.  Are others who work in a mortuary perceived in the same way?

I have been a mortuary technician for 12 years, i am now a senior. I do shortlisting for interviews and I interview applicants. I would never invite an embalming student for interview. Nor would I employ anyone older than 21. We want young, fresh people who are naive and easy to mould. Experience really doesn't matter, and people who have worked in funeral parlours are all stuck in their old fashioned ways. A lovely smile and a vacant gaze is all you need.
09/07/13 mickeymaus
-5

Hello TongTongTal and friends! I imagine you are loving your job TingTongTal! Well Done! It must be encouraging for people wishing to be in your place, that it is achievable, despite the competition.
Just a little advice needed. I am studying embalming currently, but with a view to be an apt (giving me experience with deceased). I have applied for a few trainee apt positions, thoroughly written my supporting information in relation to the job description, and done all of the necessary contacting etc. I haven't as yet been called for an interview. I know an apt and he has given me lots of advice too. There must be something massive I'm missing, or will I just have to get lucky? Do most applicants meet all requirements? I am considering getting a job in the NHS doing anything just to increase my chances, will that be worth my while? Oh, and when I've enquired about not being shortlisted i've been told I don't have enough experience, but they are trainee positions?! Would I need particular hospital post-mortem experience? or is it the embalming that puts people off????
30/06/13 Tracey-Lacey
0

I think people should just let this page be used to discuss the job in hand, professionally ! and to enquire about sensible things. If you have a morbid curiosity- research it, but its not healthy. if you want to know answers to:how do i get a job like this and pay scales and starting points- then read over what others have put over the years- it doesnt change much!
11/01/13 TingTongTal
0

thax boblet yep i think everyone should know what goes on , not right to keep things from us
30/11/12 jmg
-7

Sick. Was there anything wrong with Peter Suttcliffe? Is the Pope a Catholic?
29/11/12 boblet
-9

Jobby. Lycanthrope? You are showing your age son. Read your posts when you have ripened a bit, in the fullness of time you may understand.
29/11/12 boblet
-10

JMG. If you believe this is an appropriate forum to ask such a question, so be it. I would advise you visit a doctor then ask him/her on the Qt.
29/11/12 boblet
-4

Isn't Dieppe in France? Where do its people come into autopsies?
29/11/12 grumpyoldwoman
-7

hi can you answer a few questions , why do they take the tongue out in a autopsy ? i know we have to start some where but why do they employ trainees , why not trian them first or have courses they go on first to pick out the good ones than letting anyone get into the work ? and why do bodies have to be naked for autopsys , surely dieppers could be left on ?
29/11/12 jmg
-2

I'm a little confused do u wish to be an anatomical pathology technologist- working in a mortuary helping with postmortems and dealing with undertakers or a pathologists assistant where u assist a pathologist in general? If its an APT you wish to be then it will just be a case of looking on the NHS websites for the job under the title of anatomical pathology technologist or mortuary technician. It's on the job training so as long as u have got standard c gcse passes u have just as good a chance as any. If u wish to be an assistant to a pathologist in general or registra I believe you have to become a doctor first then specialise. Someone else maybe able to give you a little bit more advice on that but I can help anyway I can if it's about becoming an APT
30/10/11 TingTongTal
5

Hi,
I was wondering whether you could give me an idea as to how I could become a Pathologist's assistant? I'm 22, I have a Psychology degree but no real interest in pursuing Psychology as a career. I've always been interested in the Pathology field, though my A-Level results meant I wouldn't have been able to do a medical degree and work from there, so I'm looking into being an assistant. And pointers?
Thanks!
30/10/11 Hans
-4