I think that the statutory right to four weeks paid holiday annually is actually pretty pathetic and stingy when you consider that the most you can expect from mean employers in this country is two or three extra days on top of that.  Is it any wonder that our favourite pastime is taking a sicky or a duvet day and not going into work?

Throughout my working life the poor holiday allowance has been the norm with only one or two exceptions where I was managed to get around 25 days.  Speaking to other people, the average in most companies is around 22 to 23 days unless you've worked for the them for a very long time.

That's another thing that is really pretty unacceptable in my opinion.  Most companies require you to have worked for them for at least five years before they will even consider giving you extra holidays. 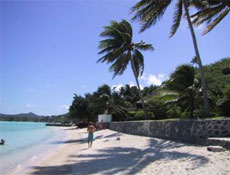 There's no time to really relax and unwind

I think employers only have themselves to blame if they feel their staff aren't loyal and are frequently absent for a variety of reasons other than their annual holiday entitlement.  There's no time to really relax and unwind at the weekend, because most people need to catch up with things that they don't get time to do during the week when they're at work.

Four or five weeks in a year are easily blown at Christmas, Easter and maybe a summer holiday leaving you nothing to look forward to, other than our equally pathetic ration of public and bank holidays.  To employers I say give your staff a break, let us have more time off on holiday and we might just work harder.  Who knows, maybe you're staff turnover will drop as well.

Not sure where you are, I worked for a UK company where we got 20 days (four weeks) which increased with long service to 30 days. We were taken over by a US company and new American colleagues got 10 days, rising to 15 after 30 years service.

I have good holidays as on a o hour. I know it's not for ever, but I can go,as not have to ask ? Imagine if friends invite you somewhere and it's in July and a jealous manager wont let you off because jealous or a chip, as they can't afford it and you can, Enjoy the good times.
I go June and July or early sept, why? Warm, resort not closed down, events on at these times
Who wants a break in November? Cold, too near Christmas? Lack of flights? Resorts many closed?
Crafty? Or lazy? I don't care
Many years ago worked Christmas day, Christmas eve etc never again and I mean never. My Health no1 now
05/05/18 Get wise
-1

hi again.
No joy on my WTC payments being re-instated as yet.
I have had no money from work this friday as i'm not being paid for the holiday week.
Its a bit of a joke as I do not own a limited company and send an invoice to the main contractor for my services.
I am simply a worker who has had to accept the conditions or else not have a job.
I would have liked to get a proper cards paid job with the contracto who ownbs the site where I work but they never employ anyone direct wh is below site manager level. Too many agencies an others are doing this to the struggling worker as you've no choice but to accept the job if you're unemployed.
They then don't pay an holidays sick pay or anything else you migt get time off for with pay somewhere else.
My WTC problwm is unresolveed as they are demanding "overpayments" be repaid.
I would like to know when I was overpaid as I always notified them of changes to jobs and income.
04/01/14 ahforfoulkessake
1

Hi grumpyoldwoman
thanks for advice. Just got round to reading it as no time before.
I will try HMRC re: holiday pay. I have just heard from my superviser that the Â£20 weekly stoppage from my wages will be being stopped in 2014 as the government will actually make it illegal to stop more than just tax and NI from someone's pay.
The boss told me that the employment agency actually gets a certain amount back from that Â£20 so I'm being peanlised for colecting my own money and the agency are getting a kickback from the payroll company with my money.
I have had trouble with Inland Revenue boneheads as they have stopped my WTC and I have to prove my 2012-13 income. They should just contact the relevant department, as they have my name, DOB address and NI number. Just email each other instead of sending me a 2nd class post letter and making me wait to send it to WTC dept.
14/12/13 ahforfoulkessake
0

affs, you should probably ring HMRC and explain your situation to them. They will be able to clarify where you stand and if the agency is breaking the rules HMRC will be interested. Do the agency give you a monthly statement of deductions? They, or the contractors, have a legal obligation to do so, and to pay the tax over to HMRC. You could also try looking at HMRC's website regarding the Construction Industry Scheme.

However if you are genuinely self-employed you aren't entitled to holiday pay, unfortunately that's how it is.

Can you get work directly from some of the contractors you work for now and cut out the agency?
07/12/13 grumpyoldwoman
1

I am not sure about my status.
Technically speaking I am self employed but I work for an employment agency and I am a construction labourer.
The company where I work pays the agency, the agency then pays me my rate then the agency has a payroll company that they process my wages through weekly who actually pay it to my account, having taken their £20 per week fee out as well as my Income tax before it goes to me. Im supposed to pay my own NI contributions.
The whole point of my question is: Do i get this holiday pay or will they shaft me for supposedly being self employed?
I'd like to know so I can get all my accrued holiday pay, if I am entitled to any, on 20th Dec our last Friday before Christmas.
07/12/13 ahforfoulkessake
4

Not enough holidays generally means that you're in a pretty good job. Investment bankers don't have enough holidays but when they do go on holiday, they can probably spend £20K in a week. Time and money, you can't have both can you?
22/10/13 Nick
-1

As of Oct 2010 all full time UK workers were entitled to 5.6 weeks leave, 28 days leave, including bank holidays although (a) your employer does not have to pay you for bank holidays as it's not a legal requirement but do out of good practice (b) part time workers get a portion of the 5.6 weeks leave, so if you work 4 days you'll get 22 days, to work that out times 4 days by 5.6 which = 22 days and so on. Employers may decide to round up the annual leave figure but they CAN'T round it down.

Employers have the right to tell you when to take your annual leave, whether annual close down, Xmas etc. but they have to give you advance notice, 3-6 months. Remember your annual leave entitlement begins the first day you start work & not after a probationary period.

Under the Working Time Directive if you fall sick during your leave you're able to claim that portion of your leave again even if it means allowing the days off to be carried over to the following year so workers will be able to accrue & take statutory annual leave during sick leave. You'll obviously need clear evidence of your illness & you can get this via a Fit Note from your GP but beware this can be complex.

It's up to employees to use their leave for the year otherwise you may lose it if your company has no system for carrying over annual leave to the following year. Read your employment contract because this has all the important elements on what your employer can/can't do, read about your sick leave as some employers only offer SSP others offer enhanced sick leave payments.

If anyone needs help with their employment contracts email me at andre@hradvisorltd.com, I can go over it with you. I normally charge a flat £10 fee for most cases but if it's complex we can discuss the matter/fee. This invite is also open to employers who want to get things right for their employees, so send me a dummy employment contract & I'll check it for you. Thanks.
10/02/11 The HR Advisor
-11

Employers can be inhumane and family matters do not count, only their family and their own health and wellbeing matters.
01/01/11 sugar and spice
13

Give me some time off please

It also disgusted me when my dad fell ill with kidney stones 2 days before he had booked a week off work, he reported his absence which he wasn't paid for and then the cheeky t**** didnt pay him for his weeks holiday he had booked months before. How is this fair? If you are poorly before a holiday is hardly anyones fault is it?
19/11/10 Give me some time off please
1

Give me some time off please

Where I used to work we had to save 7days holiday for Xmas even though the damn place is closed over that time anyway. 7 days is a huge chunk out of just 20 day allowance leaving 13 days left for the year (bank holidays on top of course) I'd find myself working overtime to accrue more holidays. It's wrong how employees should use their own holidays when the company closes anyway, it's an excuse for them not to owe you more holidays isn't it?
19/11/10 Give me some time off please
4

People who call this gripe "anarchic" and "communist" are truly the plague that allows employers and indeed the government to get away with this kind of insult. A job is not the most important thing in life, and anyone who bleats that tried and tested defence of the intellectually inferior ("It's how the real world works", "Boohoo lazy people!" and such) really doesn't have the capacity to understand that it is their own unquestioning conformity and inability to question "authority" that leads to such shoddy treatment.

Anyone who actively WANTS to spend the majority of their day wasting hours of their life is the one to decry, in my book.
09/09/09 Sir C
8

The way things are at the moment I think everyone who still has a job should be grateful and not keep carping about how much holiday they get!

Small companies find it hard enough anyway to manage without an employee when they are away and still pay them.
15/05/09 grumpyoldwoman
5

My employer managed to get round that one too - we got the minimum 24 days, but we're forced to take 3 days of our holiday entitlement during the Christmas period - when the office is shut anyway! I was chuffed to learn that the minimum hols have went up to 28 days, but somehow my boss has found a way round this and we've not actually got any more days, but instead the public hols (e.g Easter Monday, Mayday, etc) that we got off historically are now part of our holiday leave in the same way as those Xmas hols and not additional. This is perfectly legal, as employers are not obliged to give you bank hols, etc off. What a joke?!
14/05/09 Sunrise82
9