I dislike people who steal motorcycles.  If I had my way they would dealt with quite severly.  Stealing of any sort is bad, but when someone walks into your garden and takes your bike, its kind of personal!  By the way, this is the second time this has happened to me as I had a Suzuki Bandit 1200 stolen from me about five years ago.

I bought this bike, a Honda Spada (VT250) as a temporary means of transport a few of years ago when some silly woman decided to pull out in front of me as I rode to work one morning on my Kawasaki ZRX1200.  Unfortunately the ZRX had to be written off.  The Honda was a great all round bike though as it was both economical and quite sporty at the same time.  Considering its size it handled really well and I was more than happy to stick with it, especially as insurance, tax and running costs were low.

Unfortunately, due to financial problems I had to take it off the road for most of the last year, but as it happens I passed my car test so transportation was not a problem.  I missed the bike though and was really looking forward to getting it back on the road, especially since the start of the warm weather and seeing lots of other people out riding their motorcycles.

I moved house towards the end of last year, and just before that I spent some time servicing the Honda and bringing it back to reasonable condition.  The winters can be cruel to Japanese steel and chrome!  My girlfriend even re-covered the seat as it had pretty much fallen to bits by then.  Amazing what you can do with an old leather computer chair by the way!

So there she was, all cleaned up, serviced and with a recovered seat, painted swinging arm etc.  It was pretty much ready for an MOT in fact.  Unfortunately it was about then I somehow managed to loose the ignition key.  That was a blow, because I was right in the middle of moving house and didn't have time to sort it out.  I ended up pushing the bike to the new address which was only a couple of miles up the road anyway. 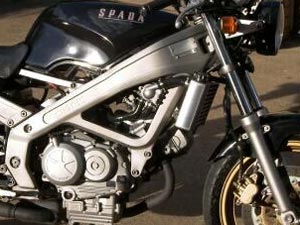 As ever when you move house it's a bit chaotic, so the bike has been in the garden until recently when I managed to get new keys cut.  I hit yet another snag because the petrol cap and the ignition keys were different on this bike.  I had to get the old cap off and find another one.  I managed to do this only last week and the place I bought it from was due to post it out to me on Monday.

This has all been a waste of time though as some lowlife scum decided to steal my motorcycle at some point during Saturday night.  People who steal bikes should be strung up in my opinion!  The worse thing is, it wasn't insured as it was off road and I couldnt afford the extra cost.  Why wasn't it locked up securely?  Well I mistakenly believed that I lived in a nice quiet area where hardly anything ever goes on.  You really need to go off the beaten track to find a motorbike in someones garden.  Besides, there was normally a car parked in front of the gate so getting it out would have been impossible.  Unfortunately this particular day the car was parked just a few feet further back allowing the thieves to wheel the bike out.

I know I should have had the bike under lock and key, or perhaps had some insurance on it.  Insurance companies never actually properly compensate you for your loss anyway and if someone really wants to steal your bike they can simply get a few mates and lift it into a van anyway.  Really effective security measures are impractical and expensive.  There isn't really anything you can do.  If thieves want your motorcycle and they are serious about it; the chances are they will probably get it.  Then of course once they have stolen from you, you report it to the police.  I'm not entirely sure what the point is there either because they never recover it anyway; they're too busy doing something less useful than catching criminals.

So today I'm pretty depressed about all of this.  I don't have the money to buy another bike as I am self employed and not on a high income.  I am very likely to miss out on the current spate of nice weather, which by the way is almost perfect.

My son got his first motorbike last Saturday. Got what security he could as we live in a dodgy area and Thatcham approved. 4 days and it was gone. Thank God for tracker and we retrieved it ourselves. The police said wait for assistance and for him not to go himself. They didn't come! His 18 and I'm worried sick as he would go himself to retrieve it againworriee without help. Wish I could invent some magical item that makes thiefs never touch a motorbike again.
30/08/19 Worried mother
1

Suzuki vl1500 lc Black stolen today 13.10
15,from central London Berkeley Street, harley fat boy exhaust,damadged sissy bar on left side and damaged engine cover on left side,after market wind screep .Was stolen at 12:29,in 9 seconds,have everything on cctv but not much help.Bikes licence no T438HSA .If you guys notice the bike out there please let me know on 07800531855 Greg,thank you
13/10/15 Greg
1

i had my bike lifted recently. it was my pride and joy. insurance were horrible to me and didn't pay. I was angry. I still am. I feel for u brother. take care and hope u can ride again soon
06/10/15 Lex125
1

Police are notified, I'm still waiting on the insurance sorting out their claims system.

It may be cheap and cheerful but it was my joy and my means of getting to work and back. I'm gutted.

Anybody sees/knows/is a clairvoyant on these matters please contact ali_mcclusky@hotmail.co.uk

by 5 males with scooters!!

Police are aware, unfortunately couldn't catch them as went down a narrow route whilst chasing them with a car. Akrapovic exhausts.... unlikely but worth a try please look out for it in BROMLEY area. Blue and grey distinct 2014 new shape brand new

YAMAHA R1 2014 BLUE AND GREY LOOK OUT FOR IT IN BROMLEY, CITY OF LONDON, EAST LONDON, KENT, BERMONDSEY etc

if you see ANYTHING please just inform the police or call 101 - be grateful for anything. Thank you
28/08/14 Catherine
0

Two Husqvarna motorcycles stolen from locked garage and garage compound in SE London. SM125S and a TC 449, both are immediately noticeable and stick out like a sore thumb. The TC 449 was currently being prepped for road use and had non working electrics and mirrors attached. Danger UK graphics on the TC 449.

If anybody sees or hears, please get in touch. iain.tarr@whie.co

Hi, my Yamaha R1 2002 was stolen some time in the early hours of 22nd March from Witham, Essex, from outside my flat.

Has some distinctive features such as no mirrors, orange wheels, grips on the tank, no indicators, suade seat, alpine star stickers on the back. Needless to say I am desperate to get it back. Am aware it's probably been stripped by now but if you see any items like these around PLEASE send a message, reward will be given if we find the bike/ parts of the bike.
23/03/14 Mr T
0

Hello.
My motorbike was stolen last night from my parking space in the back of the building in Hunts Cross, Liverpool.
It's a Suzuki VL125 Intruder, black, registration YJ04UFZ.
please if you see it, contact me by email at fabio_j_d_francisco@yahoo.com.br
Thanks
11/12/13 Fabio
-2

My Motorbike was stolen today in Canary Wharf, near the PWC building.

My 1999 hONDA Transalp 600 was stolen yesterday from London, Canada Water area. Reported to police already, license plate is T296 CNN and VIN Frame No is ZDCPD10A0XF150917. PLEASE EMAIL NERVEGNAR@GMAIL.COM OR PHONE POLICE if you know the bike whereabouts
Thanks
19/08/13 Rob
-8

Stolen 01/04/13
Please share among friends my husbands blue/white Big Bang R1 with white trimmed wheels and graphics on the petrol tank jester was stolen from our home early hours Monday Monday along with bike charger extra parts for the bike and his helmet if anyone knows the whereabouts of this bike please contact Northumbria police
More information on the big bang R1 1000cc
reg is YK09GZZ
Vin Number is JYARN221000001424
engine number is N519E0001198
Email if you know whereabouts of this bike to lea31@hotmail.co.uk
06/04/13 Lealily
-12

Motorcycles and the crash helmet law in the UK

Motorbike knocked over by car - hit and run

Should you give up your motorcycle for kids?