I am from the United States of America and I have a gripe about an unfortunate situation.  I've been riding motorcycles for more than 13 years and about 3 months ago I involved in my first accident ever.  As it happens I was not the one at fault.  I had insurance on the bike and the party at fault had insurance on their car.  I have good medical insurance coverage and this gripe is all about the problems with insurance, costs and basically the physical and financial mess I have been left in through no fault of my own.

Upon impact my leg was badly broken, Tibula and Fibula were shattered and I spent three very painful days in the hospital.  It's been more than 3 months of recovery and I'm still not able to return to work.  After the accident I hired a lawyer to handle the red tape so I could focus on healing and not writing letters or making phone calls etc.  My medical bills from just the hospital stay were around 65,000 USD plus 4 follow ups with x-rays at each, an ambulance bill and surgery bill; I'm estimating the medical bill for a broken leg to be around 80,000 USD.

As I'm the proud new owner of a metal rod and six bolts in my leg and learning to walk again, I look to my lawyer to see how things are going.  My bike, which was the newest in my stable, a 13,000 USD Suzuki that I had put nearly 4,000 USD into with papers to prove it, was the first thing to be settled.  The guy who hit me did it so hard that it broke the frame of the bike.  I was given only 11,000 USD for this and that was AFTER the lawyer fought with them for 6 weeks!  So I've lost money there and I'm still waiting on the at fault party's insurance to pay off the remaining balance of the original loan (around 5,000 USD), and ill get the difference to put toward a new bike.  I thought that this was an OK result, although considering it wasn't my fault I would have rather lost NO money at all.  Add to that the fact that it was a rare bike which I can't just go out and replace it easily. 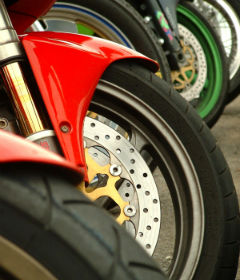 Now onto the second part of the settlement, loss of work, pain and suffering, medical bills etc.  Up until this point my health insurance had been doing their job and paying my medical bills (minus my deductible of 1,000 USD which I paid out of my own pocket).  I am very lucky in that I have worked for an employer for seven years and they have a short term disability program that I have been paying into.  So once the paper work was sorted I got 60% of my income whilst I was recovering.  This was great, but 60% doesn't cover the bills and over the next few months I managed to get into a small amount of debt as I was unable to work.  The settlement came through and the most I could get was 100,000 USD from their insurance company and this is precisely the point of this gripe.

Basically this leaves me with nothing...

The lawyer takes 25% of this which is fair because he did a lot for me and a ton of paperwork.  But that leaves me with 75,000 USD and before I get any money my health insurance company gets first grabs on it to get their money back first!!  Basically this leaves me with nothing, in fact it leaves me with less than nothing because I still have to come up with my medical deductible, plus all the medical stuff I've yet to get bills for such as the follow-ups, physical therapy, x-rays, meds etc., NOT to mention the debt I've gotten into just living on 60% of my usual income!

All parties had insurance, max coverage available, and I still get screwed!  I have more than 10,000 USD in bills to still deal with, I have lost my favorite motorcycle and have no where near enough money to replace.  In fact the money I do get back for the bike will have to go towards paying more medical bills.  Let's not forget the leg which is very painful and Ill probably suffer with it for many years to come.  This is all thanks to a guy who wasn't paying attention.  He walked away fine, maybe his premiums will increase a little bit, but the finacial loss to me and FOUR months of my life are apparently worth NOTHING.  In fact if I had hurt myself on the bike with no other parties involved I would have probably fared better than being hit by someone with full auto insurance coverage.  HOW DOES THAT WORK?

I'm happy to be alive, no doubt about that, but I am disappointed in how the system works and think that it's complete BS!

I've worked for insurance company - and their work is risk management - just hiring legal bods to put together claims 'get out' clauses and then setting premium prices to maximise revenues and minimise payouts. Insurance is essentially about mismanaging your 'fears' - so that you worry unduly about losses you probably won't ever sustain and then seemingly getting you to buy manufactured peace of mind by paying for insurance that are hardly worth the total sum premiums you end up paying them, unless by fluke. Eg. You pay one premium and you need to claim thousands a week later or so. For the vast majority of losses you claim for, you're either not covered at all (according to the small print) or you are covered but its not worth putting in a claim - due to the excess payable - and if you do decide to, the insurance company promptly ups your premium on the same cover, which menas you end up paying the claim sum back and a lot more besides. Insurance is just legalised fraud. In other words, they con you: by exploiting your fears and need for peace of mind. Pity not all insurance is voluntary. Like banks, and lawyers, insurance companies are risk averse, money grubbing vultures. I can understand (but don't condone) why it is that people are tempted to put in false claims: it's to get back all the money they've paid in when not needing to claim for the item(s) covered and/or to revenge insurers that didn't pay out when the insured thought they were being covered and weren't - whilst paying for the privilege of being misled.
30/08/11 Grumpy xx
-3

I am very lucky that I have not had such a bad accident as your cases, I am glad you and your familys are all okay.
But 4 years ago I was at home watching late night TV and my neighbour came over informing me my car radio was on and playing loudly, I apologised and went to check and find that the back windows of my car have been smashed in as someone has tried to steal my car. My car was on my drive behind the gate, not on the street, I thought it was safe. I am very glad I had a wheel lock.
So I called my insurance, as you would do, to inform them of the incident and give them the police report number to show that is was an attempted car robbery ect and get it sorted, all straught forward, so I thought. A very lovely young lady on the phone informs me that this will cost ME, the victim, Â£300 to repair both windows and then my insurance would go up to an insain amount monthly, more than double what I was already paying. She informed me I was better of paying for it myself and save myself the increase, as I said a nice young lady. Luckly my Grandad has some very good friends who sorted both windows for Â£65 altogether, no insurance increase as the girl did not log it. What am I paying insurance for? I did not break my windows while stealing my car, I have the police report to prove it.
29/08/11 Rogue's View
-2

My wife's car was hit by a hit and run van whilst parked in a road near her shop. No one got the registration number but we had to claim through More Than for the repair. Only at insurance renewal time did we find out that as they could not get any payment from a 3rd party they classed the damage as "at fault". In other words it was her fault. They decided to double the premium, only when I complained did they offer a small reduction, complaining further they realised they should have advised us earlier and they are sending a £50 cheque.

What the hell is the point of buying an insurance when a hit and run causes the damage and now its our fault? I thought insurance companies are supposed to share the load across a large base of customers for such a problem, not screw the poor customer. How naive..

Apparently all insurance companies do this AND this info is shared, so don't think you can go elsewhere without coming clean as your insurance would be void if you needed to claim.

Anyway, screw More Than, the COOP offered cover for just over what we paid last year.

Basically, car insurance companies are all thieving bar stewards as far as I can tell.
29/08/11 TonyL
-12

I have been with Allstate Auto for over 10 years,paying $5,200 per year. Last year both my daughters had minor accidents. Allstate payed me around $1,600 to cover damages on both of their cars, I have full coverage on 4 cars with a $500 DEDUCTABLE. My 6 month policy was renewed on, stuffed in the back was a questionnaire that had to be returned in 10 days that I did not see. Later on I received a cancellation notice for failure of returning said questionnaire. I called Allstate and my local agent, sorry pal there is nothing we can do. Is this a new trick the insurance co. are using to cancel your policy when you file a claim? I have payed Allstate over $35,000 in the last 10 years and this is my thanks. Your in good hands with Allstate but I think they only know how to use one finger on each hand!
29/08/11 D J prettyman
-16