As a biker I do not understand why horses are allowed on the road.  Horse riders are for ever complaining about vehicles not giving them room, yet they allow their animals to foul the road.

All you can do is hope and pray...

Don't they realise that when other vehicles, which pay road tax to drive on the public highway, hit this crap it creates a major danger.  I ride to work 20 miles a day through country villages (the most direct route for me). One of these villages is the home of one of the country's major polo clubs, along the main road through the village there are many blind bends.  You are riding along at a safe speed when you lean into a bend and there it is in the middle of the road, worse than ice, where do you go?  All you can do is hope and pray.

Why is it in this day and age where people are fined £500 for letting their dogs foul the verges, is it that horses are allowed on the road?  Why don't they ride around with a shovel on the back of their saddle so that they can remove their own crap. 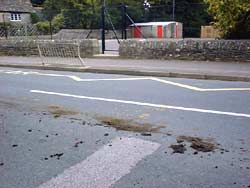 On top of this, especially near these polo grounds or hunting sites you have the typical upper class country folk who ride along and look at you as if you were the person who should not be on the road.  Not so long back one of these stuck up b*****s decided that a friends car, which had slowed down to overtake her horse passed to close and smacked it with her whip causing extensive damage.  Funny she hadn't any insurance and was not taking the blame and the Police don't accept it as criminal damage.

In conclusion, why is it that a horse which is not completely under the control of its rider, has a brain of its own, which does not have to pay any insurance or tax to go on the public highway, is allowed to leave its excrement on the road?

It is an offence for anyone to allow any solid or liquid matter to be deposited onto the road surface. Allowing spillages to happen can be potentially dangerous to motorists and pedestrians, and possibly hazardous to the environment.

Where offenders can be identified, they will be instructed to take whatever steps are necessary to restore the road condition. The police may be notified and, if those steps are not taken, the police may consider taking further action.

End of discussion on that, but the clip clops of this world won't acknowledge their responsibilities, or indeed the lack of them.
28/11/20 Headblock
2

There is a bag on sale called a "Catch It", (And I'm sure there are others), that fits under the tail, and held in place by a couple of straps, it is discrete, easy to empty and to hose out, and said to be very effective, we should lobby parliament to make it compulsory to put these on all horses that are ridden in public places and this simple solution would solve the problem.
24/04/20 Carlos
3

I live in a N.Yorkshire Village and get so fed up of the sheer arrogance of some horse owners, one "Lady" used to make a habit of actually riding her silly, skittish Horse
" ON THE FOOTPATH !!!!! " eventually some intervention from the parish council did stop that, but she always makes a point of NEVER riding near her own home so does not have to put up with the piles of unpleasant dung all over the road , although it is not as toxic as dog poo, it still contains mites and in some cases WORMS ! possibly even traces of toxic worm treatment.
In some cases Dogs are attracted to it, and if eaten, can make them quite Ill.
There are plenty of Bridle paths and fields in the local area, and feel riders should be legally obliged to use them, as opposed to public roads.
I was in Wentworth several years ago, and witnessed a horse rearing as it was ridden past a soft top sports car, causing the rider to almost fall off but her leg did go through the roof of the car, putting a large hole in it and bending the frame, she made no attempt to trace the owner, and got quite nasty as she realised I had taken a image of her and had dropped a note with my details through the damaged roof for the car owner to get back to me.
The car owner did contact me ( A man in his 70's), and said on the return to his car, the horse rider, her husband and a collection of "Heavies" were waiting, they tried to intimidate him until he told them that he was retired magistrate. It did go to court but at the last minute, reluctantly,paid him cash, but made life so unpleasant up to that point. Time for things to change now....
23/04/20 Carlos
-1

Perhaps all horses on public highways should beven forced by law to be fitted with a butt plug.

For that matter I've never seen a diaper for horsession. . Maybe that's another interesting equestrian in the pipeline.

As to how a bridle whip canot cause extensive damage to a car is anyones guess on that obvious lie. I'm guessing the car must of either been made of paper mache or so old it was in fact made exclusively of rust held together by a coat of very thin paint and shouldn't of been on the road.
16/01/19 spud
-1

I'm just curious as to exactly how anyone can cause extensive damage to a car with a bridle whip, was this car made of cream cheese or perhaps yoghurt? Man oh man you do come out with some obvious bullshit.
16/01/19 anon
0

"Her majesty" - perhaps then on your way back from the stables you could perhaps pull over in your Range Rover, get out and clean it up?
30/07/18 The King
-1

Fed up with with ridiculous town folk moaning about horse manure, well the well known fact is try handling a horse with one hand whilst cleaning up it's mess would be very dangerous,not only could a horse bolt and cause dangerous consequences, but also carry the mess away whilst riding would be illegal as we would not be in full control of our animals, obviously it's the ignorance of a FEW people who complain, most country folk don't bother as farmers move their cattle along roads and don t clear up their mess! So I suggest leave it to the gardeners as free maure, lets hope their flowers appreciate it !!!!!!
23/07/18 Her majesty
-6

Oh the crap (no pun intended) modern way of things, what ever happened to policing; Fouling the queens highway, deliberate acts causing damage not criminal (unless your calling a politician an honest person). I've noticed in t Germany and Holland farmers don't seem to leave such a trail of muck on the roads, when German farmers cut their hedges they hoover their messes up! No respect for others, or the policing of in this country.
13/01/18 Victor the great brexiter!
3

Dear duggy I completly agree with EVERYTHING you have said.These horse riding barstards just don't care about bikers.The saddle shovel should be made mandantory and if not used the horse from which the emmersion origionated should be turned into burgers
07/06/16 Worzel
2

Clip Clop - Happy to spend 3 minutes with you in a boxing ring, hopefully I can knock some sense and humanity into your thick ignorant skull.

For me, as a rider of motorbikes and bicycles, it's not an issue of road tax and rights of way, it's a simple matter of respecting others and their choices - And their right to enjoy their preferred past-times safely. I too live in a rural area and have spoken to a number of local horse riders and in every case they were unaware of the potential hazard that manure presents. I'm sure I've not seen any spades carried, but I have seen one or 2 instances of these local riders return to the crime with spades clear up. Not every time, but it's a start, without laws or risk of sanction.
24/03/16 Headblock
3

Biggest skid risk to the motorcyclists on here is the slimey mess their brains left on the carriageway- as their is clearly little of it left in their skulls!
11/01/16 Clip Clop
-3

Oh don't fret, most of the big supermarkets have placed orders for the horses in this country. To go in their lasagnas.
03/01/16 jo jo
1

These are all fine arguments but it all boils down to people (as the horse has no choice in the matter) leaving the doucy for other people to deal with. Whether this is legal or not, it is a very lazy and selfish thing to do.
24/09/15 GhostOfKarlosTheJackel
2

totally agree with you mate , they should be made to pay like us poor motorists . how would they like it if we did the same on there doorstep ??
23/08/15 wildcat
0

I think it is very cruel to take these creatures onto the road - anyone can see the poor brutes are terrified, that is why they are only a whisker away from kicking out or bolting. It is once again, these 'posh' people wishing to show off the fact they can afford a horse, and let all the lower-classes on the roads step into our horse doo-doo.
Because of this attitude, I always rev my engine, shout and turn up the wireless set in the car as loud as it will go when I roar past them. Bloody things.
30/10/14 collar
3

There aren't enough bridle paths in the UK