Would society be ready to self-regulate if speed limits were abolished from next year?

Many times when I'm behind the wheel or on my motorbike I imagine what it'd be like not to have speed limits on our roads at all.  I imagine that if everyone was like me, there would be no need for them.  You would always know what the right speed on a given road, in those circumstances, in that weather would be.  Why wouldn't you, you're reasonable human being capable of doing amazing things (like putting two and two together), therefore, being considerate to your surroundings wouldn't be a problem.

It all comes down to the driver, you see.  A tired useless accident-prone driver who fiddles with the radio and manages to shave at the same time while moving will be a danger to the world - whatever his speed.  A skilled and careful driver like me, pays attention every second of his journey and keeps himself and others safe.

Why should I crawl along at 70 mph on an empty motorway at 3am?

If there were no speed limits, people wouldn't need to speed anymore.  They would just make up for the delay where and when it's safe - legitimately.  Why should I crawl along at 70 mph on an empty motorway at 3am when my skills and modern technology (in the form of a fast, reliable and safe car) would allow me to get from London to Cornwall in 3 hours? 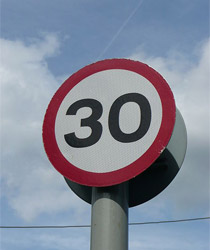 I know why: because we don't live in an ideal world.  The question, therefore, is: is it 'non-ideal' because of a handful of anti-social individuals or is it more than just a handful?  If the former is true, I suggest that we cage that handful of thugs and let the rest of us get on with our lives without having to observe rules which were made with 'them bad guys' in mind.

Classic story: a 3-lane dual carriageway, lunchtime, dry weather, 1 sleepy driver in the slow lane, 1 unhurried driver in the middle lane, 1 selfish b*****d hogging the fast lane and stuck behind him is Mr.X experiencing another instance of speed limit enforcement(50 mph) by a fellow motorist.  Mr.X is late for a job interview but is in good form, having slept well, and his car is well-maintained.  Exceeding the limit by 20 mph would help him.  He's stuck for 5 miles, after which he comes of the main road and into a residential area.  This is his opportunity to make up for lost time.  He keeps his foot on the pedal and flies past a school at 40 mph when... a child steps out in front of him.

Speed limits save lives.  But frustrated drivers take them.

GOW, Sorry I was half asleep when I posted that, after taking you're advice and researching further, it is now all clear to me. Thank you dear lady!
09/03/14 collar
0

collar; don't know why I'm bothering to reply as you clearly haven't been taking your medication again; you didn't read my post properly did you?

Look up the 85th percentile rule and you will hopefully understand dear.
09/03/14 grumpyoldwoman
0

Take it a bit further and you could perhaps advocate speeds of 120mph or more. I I can see that my speed is over the top sometimes If i knew how to drive slower comfortably, I would. Of course I do not want to cause any accidents or harm anyone.

Perhaps my speed was high after having recently witnessed a line of olds doddering along the highway at ridiculously low speeds. I can't understand how these people get enjoyment out of driving so slowly.

Although some of you find it hard it hard to accept, raising speed limits (to nearer the limit suggested by the 85th percentile rule) can actually reduce accidents; as they have found recently in Denmark.

In Wyoming,USA they experimented with no speed limits. Death rate 70% down, but the Police department revenue was also down by about 70%. They decided speed limits are needed, funny that.
15/01/14 Sk8kid
3

The amount of noticeable vehicle noise can be influenced by things like wind direction, road surface material, how close the buildings are to the edge of the road, and the volume of traffic and the speed of traffic, as any and all of these things either in combination or even by themselves can set up what is known as harmonic resonance, and NVH, Noise, Vibration and Harshness.
A good example of harmonic resonance is the sound caused on the concrete sections of the M25, especially when driven along by vehicles with radial tyres, you hear that awful drumming scratch sound. Traffic noise can be amplified and exaggerated if it bounces,or echos off near by buildings. Different patterns of tyre tread can cause differing levels of harmonic resonance.
15/02/11 The continental expert
-10

Congo - while your posts are mildly amusing I do wonder what the point of them is.

'anon' seems unable to distinguish between a Rolls Royce at 70mph and a smelly little French car at 30mph.

DSG - Have you ever lived on a busy road? I have and the faster the cars go the louder it is at night. That is why I stressed residential road. The people who live there have a right to some peace at night.
04/02/11 Chump
-11

Chump,I'm just saying if,IF there was an empty stretch of road and there are no vehicles/cyclists/humans in the way,then why should you have to keep to the speed limit?
04/02/11 DSG
-1

DSG - it depends on where the road is. You cannot just make a blanket statement like that . There still needs to be speed restrictions on residential roads even if there are few other cars around.
04/02/11 Chump
-8

Big D:it is not insane to drive at 60mph on an empty road at 3am provided there are no other vehicles on the road.Friday is not a "maniac" as you try to make him to be:he is a rational thinking citizen like the rest of us and he is mostly right:why should you stick to a 30mph speed limit on an empty lane at 3am provided there are no vehicles around? Most people drive at a speed they feel comfortable at,but they can't do that because they have to stick to the precious speed limit and keep an eye on their speedometer.You,on the other hand,think that if speed limits were abolished,everyone would start driving erraticaly and the main motorways would look like scenes from an action movie.
04/02/11 DSG
-22

Big D:it is not insane to drive at 60mph on an empty road at 3am provided there are no other vehicles on the road.Friday is not a "maniac" as you try to make him to be:he is a rational thinking citizen like the rest of us and he is mostly right:why should you stick to a 30mph speed limit on an empty lane at 3am provided there are no vehicles around? Most people drive at a speed they feel comfortable at,but they can't do that because they have to stick to the precious speed limit and keep an eye on their speedometer.You,on the other hand,think that if speed limits were abolished,everyone would start driving erraticaly and the main motorways would look like scenes from an action movie.
04/02/11 DSG
-3

Stavanger9 - excessive speed also causes excessive noise for people who live on busy roads. Before anyone says they shouldn't have moved there then, they often have limited choice where they live. A lot of social housing, cheaper private rentals and lower priced property to buy are often located on main roads.
22/01/11 anon
-6

I live in a built up area and the road outside my house is a 30mph limit. Some idiots absolutely fly down my road, some must be doing 60mph+. At 3am I might be out there for whatever reason - late home from a long drive, holiday, etc. If I try to cross my road when one of these idiots is coming at 'numpty' speed, there is a huge risk to me, but not him. I think for this reason, and the residual road noise, that vehicles should be restricted to limits. Can you imagine the risky overtaking likely to go on in built up areas because of impatient twits? And usually these twits are youngsters in little cars with huge noisy exhausts, windows wide open, stereo blasting full volume in a residential area, late at night. They just don't give a damn and it's about time the law was changed to stop it.
22/01/11 Stavanger9
11