Southport Air Show was a rip-off in my opinion!  I decided to go to the show at Southport for the first time this year and as soon as I arrived there I began haemorrhaging money.

I followed the signs for 'Park and Ride', thinking that this would be the easiest way to get into the town centre initially, and then a quick walk to the beach where the show was located.  I was disgusted to find that the usual £1.00 parking fee had been increased to £5.00, and that the 'Park and Ride' bus was actually not running, and that I would have to walk into town.  As I was with my elderly father who is disabled with ostio-arthritis, this proved very difficult, to say the least.  This was the first rip-off of the day.

Upon arriving at the air show, I was astonished to discover that charges for 'pedestrian entry' was £8.00 each, and that the only concession that seemed to be offered was for 'Children Under Five - Free entry'.  My father who is in his 70's had to pay the full fee, and I'm assuming any child unfortunate enough to be 5 or over also would have to have paid the full £8.00.  Another rip-off in my opinion.  Furthermore, it was only when I got inside that it dawned on me that I had not been given a programme, and upon enquiring, I was told that a programme would cost an extra £3.00!  Let's just see how much more cash we can squeeze out of the public eh? 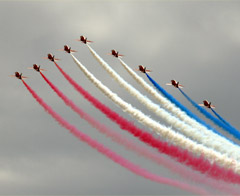 My father had been to the air show in the past, and he was astonished at the very few stalls that were present now in comparison to past events.  There were very few indeed, and rather than being actually on the beach as in the past they were on the other side of the road; instead the beach was packed with many more cars than in the past, all of which will, of course, have been charged a hefty fee to park.

Whilst I enjoyed the few planes and helicopters that I did see, particularly the fantastic red arrows (their skill is breath-taking!), we left early because of the very poor weather and I was left with the feeling that the whole air show was one vast, money-making machine that had no regard for people on low incomes, the elderly, or indeed families with children.  I'm sick of working long, hard hours for my salary, only to find that at shows like these (Ludlow Food Festival is another example by the way), the value of the pound in my pocket is worth relatively very little indeed!

Sounds a bit moany to me. £8 a ticket with a fiver parking is probably cheaper than parking in an NCP in a large city centre on a random Saturday. And there's no planes to look at.

Did you know you can actually hire the Red Arrows for FREE? It's true. Email them and they will fly past your house if they happen to be in the area!

Well, I've certainly never paid £7.00 for a cinema ticket. Geesh, everything is, of course, relative, and Fairford and drag racing - I'm assuming they don't take place on a public beach - will have their pros and cons? I'm also assuming that they offer more concessionary rates than merely 'children under five - free entry'? The lesson I've learned from Southport is that I shall do some research first about the costs, including reading internet sites like The Weekly Gripe, weigh-up the pros and cons of going, and then make a decision. However, I'll start from a position of 'probably not', rather than 'probably', and as a rule will seek to give these type of annual events a miss. You may find £8.00 a lowly sum to pay, but I do not - on top of all the other reasons given in my gripe. To be frank, geesh, your response was 'lazy', I think.
29/09/10 miserablemoaninggit
-7

Bloody hell, someone else thinks the same as I do about Southport air show. I still cant believe I went and spent good money on it. I too went to the park and ride and was ripped off. They had a guy right at the entrance telling us that the bus wont be running, but by that time it was a bit late for us to change our mind about parking there. I dont think that ive ever been so ripped off in my life! Never again mate, never again!
26/09/10 fredscrivens
-1

Let's face it,in this suckshack of a world,new companies are sprouting out of nowhere like blood-sucking leeches,intent on taking all your money and leaving you bankrupt!
In the 1900s,there were more cheaper ways to enjoy your day out,now that the Tories are back in power again,Britain is about to get worse.MUCH,MUCH WORSE!!!
P:S:Is Southport in England?
P:SS:Don't worry,nowadays it's expensive to go out and enjoy yourself.
25/09/10 DSG
-6

My first thought is that you have not been to a pop or rock festival lately? £5 a trip for decent loos, £15 burgers, £100+ to actually get in.
Having said that the seaside airshows are a cash cow, the venues are not ideal, there is often little on the ground, I guess because local traders with shops don't want competition. Airshows on airfields are far better, albeit probably not cheaper, and the profits often go to forces' charities at least. On the ground you get lots of stalls, competition between vendors (which lowers the prices) and static displays of aircraft. I don't visit airshows anymore, but my friends that do consider seaside shows as "for the grockles", really beneath their interest.
24/09/10 Timelord
-32

Rip-off Britain is all I say; these events seem to bump up prices whether they are small scale carnivals to big airshows, they want to make as much money as possible.

My sister went to the town's annual show, which has a travelling fairground; she said that she spent a small fortune paying £4 each for her and my niece to go on a ride which lasted less than a minute. In addition to gave my other niece £25 to use at the fair, my niece came back after only being there a couple of hours saying she had spent it and nothing to show for it.
23/09/10 DW
-8