Occasionally, I enjoy a meal out with friends and family, however, if it is a MEAL you're paying for, then surely, a meal is what you should get.  My gripe is that there seems to be a wide variation in not the standard of food as such in British restaurants, but the value and quantity of food.

Recently, I was invited by friends to dine at what used to be a village pub but is now a restaurant with hyped up prices, but I did not choose the venue so I went along with it.  I selected fish pie from a specials board and a soup starter.  Although the soup was OK I would not say it was of special note, however the fish pie was a joke.

Imagine an ordinary bowl-shaped coffee cup, with flaked fish at the bottom and the remainder topped up with mashed potato.  THAT was my fish pie and it came with just a small ramekin with a few leaves of kale on a very large plate.  This tasty, but minuscule morsel was 12 worth according to the specials board, but not to me.  I wouldn't have paid half, in fact, it was so small it was more like a child's portion.  Another friend ordered the same and half way through eating it, the waitress came round and asked if everything was OK.  My friend said 'Lovely, what there is of it ...' 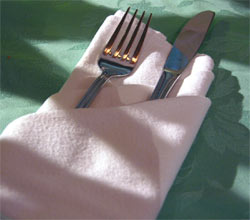 I avoid going back to these restaurants...

My sentiments exactly, but as we were with a group, none of us wanted to make a fuss, so we did what us Brits do best, put up and shut up.  The chef / restaurant owner in this case had got away with it again, another ripped off customer.  In fact, my share of the bill which did include a glass of red wine came to 27.  I left feeling aggrieved and hungry.

This has happened to me time and time again, and I avoid going back to these restaurants because they're just not good value for money.  But I ask; why do we all accept this silly less is more' nonsense?  It's King's new clothes alright, but people are blind to it and accept this rip-off practise; the just eat the food, pay the bill and say nothing.  If I dine out I need a meal to satisfy my hunger, not a piece of art, decoratively laid out on a plate so I can take pictures of it.  Wake up England, make a fuss, you are being ripped off, the King really IS naked!

I know how you feel in a way I went to a Yates and got cheese and bacon burger with spiral fries and oraange j20 ansd paid £9.50 :O.
If i had got the chip and drink along would have been £4 so I paid £5.50just for a burger which wasnt worth that much. I was so tempted to speak to the staff but I ate it all so can't complain
20/10/14 me
0

Me and my family went out on Friday 13th June 2014 for a meal the accasion a birthday, the restaurant COAST TO COAST in Strood Rochester in Kent, this is the biggest rip off restaurant we have ever visited,and we have been to a lot over the years. This is why. We ordered a kids meal when this arrived to our table two and a HALF chicken stripes about 4" long and the Half peace 2" the kids did not even get 3 hole strip why I can not explain,this was with about 20 chips,that's it,the price Â£7.95 we ordered twice we refused to pay and told the waitress to take them back. We had a meal deal this was 5 socking wet in batter dripping in grease FILE, the main we ordered was a chicken burger meal, this came out a dry bun with 2 stripes of cramatedd chicken NOT A BURGER as stated on the menu 20 chips Â£10.95 a joke,pint Shandy Â£5 joke, this meal was Â£190 eight adults 2 children this amount was with the kids meals taken off a joke . this is the first time we have been to a restaurant and came out hungry. Please do not go to any COAST TO COAST RESTAURANTS or you will regret it.
14/06/14 James
0

Petra, the late Michael Winner had a very good description of "Nouvelle Cuisine", he called "a series of decorated plates".

Rick Stein, on the other hand, just calls it "bo11ocks"!

What annoys me on the few occasions I come across one of these plates is how they pile it all up, usually with something soft, like designer mash, on the bottom, with the meat on the top so you have to disassemble the stack before you can eat it.
03/04/13 grumpyoldwoman
5

I enjoy good food and like programmes like Masterchef but I hate some of the modern conventions of fine dining such as the above mentioned tiny portions.

Why do they all do these nasty little skid marks of sauce on the plate? They put a tiny blob of sauce on and then smear it with the back of a spoon. What's the point? It looks messy and unappetising. If it isn't good then why bother and if it is good then an amount of sauce that is about the equivalent of an old fashioned coffee spoon isn't going to be enough. Put a decent amount on or leave it off.

And what is this new thing - foam? Every programme or menu suddenly has foam of this or that. It looks like cuckoo spit! I don't think I have even seen anything so unappealing on a plate. Nasty and pointless.
31/03/13 Petra
0

Welcome to rip of Britain.More fool you for not complaining.Hope you left them a decent tip.
06/08/10 Cherry Minton
6

"When we phoned to book the table, the manager was quite rude and when we arrived, the service in the restaurant didn't improve."

Zest Indian - 69 Hanger Lane, W5 1DP. I would like to express EXTREME disappointment with this restaurant. We phoned and booked a table for a large group for the buffet lunch. To our surprise when we arrived at lunchtime (12pm), there was one meat dish in the buffet the rest were noodles or vegetarian dishes. We were the only people in the restaurant. Even more disappointing was that one of the people in our group eats there regularly and said that there is usually ample variety in the buffet. He thinks that when we phoned and pre-paid for our meal - the manager has taken away the meat dishes and left us with the rubbish food that is usually left over. When we phoned to book the table, the manager was quite rude and when we arrived, the service in the restaurant didn't improve.

We have lunches with groups of 10 or more at least once or twice a week and we were prepared to give Zest regular business, but because of their attitude over the phone and in the restaurant, they have now lost themselves a whole lot of business.
10/06/10 Very unimpressed
-3

I was in a moterway restaurant the other day and went to the till with a sandwich, a can of cola, and an apple, and I said "sorry but I have only got a fifty pound note on me" the cashier said "don't worry, just put the apple back"
18/03/10 Danny boy.
-6

Absolutely, totally agree. My pet hate is "We need the table back by 9:30" as if we were about to say "Oh and we were just about to erect a tent!" This is before you get the aforementioned micro portions and sullen service. I've pretty much given up on restaurants these days...
27/10/09 dwil
0

There are alot of restaurants out there with small pretentious portions of food that come at a hefty price. If your not prepared to recieve a big fat triple digit number when the waiter brings you the cheque, I suggest you try to stay away from those classy restaurants.
There are some "all you can eat" buffet restaurants that at first thought, you might think would serve cheap , poor quality , bad tasting, badly cooked food ( I agree there are many ) but some restaurants do freshly cooked dishes as you order. Maybe for £15 or so a head, with a few drinks ( which is what they usually profit on ) totalling £20-£30 , you will be walking out rubbing your jolly belly like santa claus.
25/10/09 AngryWaiter
2

The other day we went to a restaurant and asked for mineral water, and were served some in a bottle of size 200 ml. For this privilege they wanted £2.50 for the bottle plus its proportion of tip [12.5%].

They can all take a running jump down my bottomless pocket.
03/09/09 Scum Scamsters
-3

It really annoys me when you go to a restaurant, choose a small bottle of lager and they have the nerve to charge 5 pounds 75 just for that. Never mind that by buying it wholesale, they get it for under a pound. I can only assume that the money goes towards the electricity on the fridge that they put the bottles in....mind you, at that rate, we're all paying for the Blackpool Illuminations...
02/09/09 Currylover
8