I recently spent a day at Blackpool Pleasure Beach and whilst I did have a lot of fun there and really enjoyed myself with even the British summer weather being kind for a change, there were one or two things that cast a shadow over things.  I won't complain about the ticket prices because we used Tesco Club Card points to purchase those, although I suspect some might say the cost is a little high and quite rightly so.  But doesn't everything seem expensive these days?

The first issue I have is that we had picked up a couple of sandwiches on the way from Tesco so we could have a bite to eat around lunchtime.  The food vendors in theme parks are notoriously expensive and as it's been a while since I visited the Pleasure Beach I didn't realised they'd introduced a new policy on bringing food in: "Due to the intensity of rides and attractions within the 42 acre site there is limited space and picnics and food are not permitted beyond the main entrance.".

The burly bag checker was maintaining the company line and it was decided our couple of Tesco sandwiches was in fact a picnic and we were directed to the lockers at the park entrance.  We decided, however, that paying £4.50 to store a couple of 99p sandwiches wasn't economic and ate them on the spot (and we'd only just had breakfast).

Personally, I don't buy into all that "limited space for picnics" bullshit.  I believe the real truth is more like "We want you to buy food in the park at our inflated prices so we can make even more money from you.".  However, moving on... 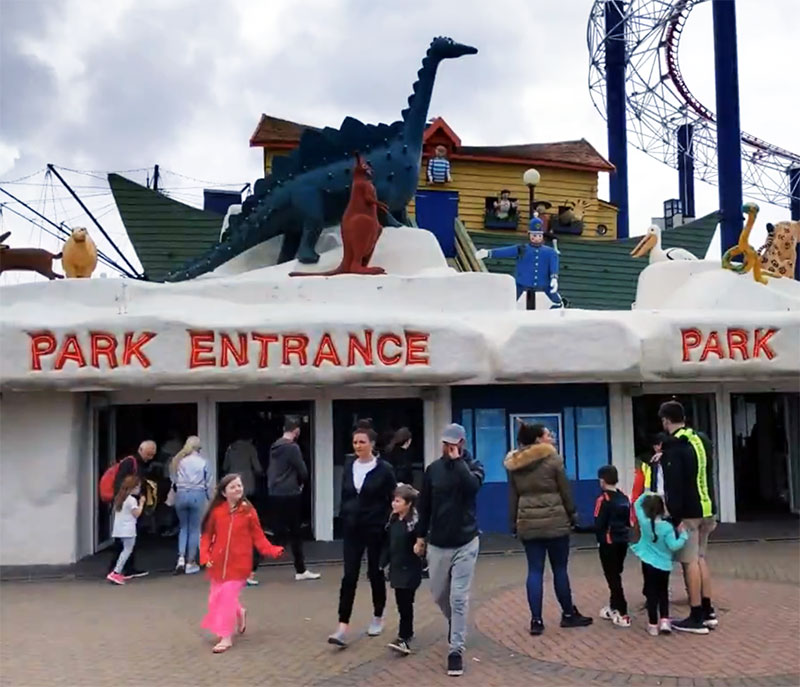 We went on our first ride Infusion and the queues weren't bad I thought.  The experience was thrilling and it was all good despite the initial issue at the park entrance.  After a bit of wandering around we decided to go on "The Big One" and joined the queue which didn't look to bad at the time, but we soon realised it wasn't moving all that quickly.  In the end it was over an hour before we made it to the front of the queue - or so I thought.

I believe they call it "Speedy" there and it's the equivalent of the "Fast Track" system at Alton Towers and it basically gets you on the ride ahead of those who have been queuing.  So I had to wait an extra turn while the "Speedy" folk went around and whilst it doesn't sound like a big deal, cumulatively it impacts a lot of people.  Also, an hour probably isn't much when you compare it to my last time at Alton Towers with two and a half hours in a queue.

I don't think that these "queue jumping" systems are fair and believe it's yet another excuse to squeeze some extra cash out of people.  Of course the more affluent people and those that believe they're more deserving than others will think that this is okay.  In my opinion they should either get rid of the system or implement a ride time system similar to those used in some theme parks in the United States.

We all know that profits are top priority though don't we?  Thanks for reading.

What a load of bollocks!It's just a cynical ploy to extract more money out of people in an attempt to maximise profits.
I'm heartily sick & tired of being ripped off in this country.Don't put up with it.
I'd have kicked up a stink & taken my custom elsewhere.
Just boycott them & they will soon be out of business.
Period.
20/08/19 Chatly
8

Absolutely right. Rip off Britain. It's everywhere you go they try and drain you of every penny. Me and my young children took our shop bought popcorn and drinks with us to the cinema only to be told 'own' food can't be taken in. When i questioned why and on what basis and kicked up a fuss all of a sudden i was allowed. Seems like a lot of companies like to fleece people at every opportunity, i think they call it up and cross selling, i call it ripping me off.
19/08/19 Neostar 2
8

You're absolutely right about the policy of PB being draining every last penny they can get away with from park guests (Last time we went even the laughing clown was pay per view - hidden behind a pissing curtain and only cranks up if you stick £1 or whatever in his arse!)

The way to get around is by beating them at their own game, taking them up on the option to leave the park and have your own picnic on the “designated area” outside the main park near the maze. You can come and go all day once you have a pass or wristband so are free to leave, eat your grub then go back inside. Think if enough people did that it'd leave them with little option but to rethink that malarkey.

There must be countless park guests with a legit need for having food with them (health / medical conditions for example) and honestly, I can't see how the park could refuse to allow anyone entry to the park on those grounds anyway.

In any case the bagging checking is stated as being purely for security and only weapons, drugs / alcohol and items that can cause. When they first introduced the new security measures I put my bag, phone, keys and the usual through the scanner and at the other side had some burly guy beckon me over like he was booking in Cat A Prisoners. Wanted to go through my bag and it caught me on the hop but annoyed me more than anything and I asked why he needed to go in it. I'd just had it all scanned so what was the need?

“Security we need to make sure everything is checked”

“It's just been scanned if there was anything untoward it would be picked up. You're not rifling and rummaging through my bag. It's my personal belongings there's nothing in there anyway but if you're insisting it's policy, we'll leave and ask for a full refund. You're not going in this bag either way up”

Another guy came over, beckoned me through and made out like he was doing us a favour by not pushing on it but shit me...if they're strip searching park guests for signs of a few sammiches you can shove that where it hurts.

The fast tracking system I agree can take the absolute piss and needs a rethink. We've stayed at Alton Towers a few times over the years and like that hotel guests are allowed earlier entry into the park before it opens to the public.

In that sense you at least have the extra bonus of being first in and first on whatever main rides you want to ride without gloating and shamelessly passing all the day trippers with a middle finger up.

Once the main gates open to general public your privileges end and you're in line with everyone else which is fair shout. Just don't have a huge breakfast!
19/08/19 Charlotte
4