I recently attended a gala day in the town where I grew up.  You know the kind of event that all the locals attend with parades, fairground rides and stalls etc.  It was nice to get back home for this as the town (more of a village really) was celebrating its 50th Gala day and my sisters were running a stall.

I had a great day all in all, but one thing that still bugs me and its something I have noticed before at other events such as this.  Unless you have the foresight to take along some food and drink, you end up buying snacks at these burger vans and mobile catering places.

The thing is they charge an arm and a leg and I think that its just a complete rip off.  I had already decided that as we were attending a barbecue later on that evening I would just have a small snack to tide me over.  A quick look at the menu and I thought that a tray of chips would be nice.

Burger Vans a complete rip off ... how do they get away with this daylight robbery?

Guess how much I paid and what I got for my money?  Two pounds for a ridiculously small tray of chips that probably contained less than one whole potato!  They were charging three pounds for an unappealing greasy cheeseburger that probably would have been gone in a couple of mouthfuls anyway.  Just who do they think they are kidding and how do they get away with this daylight robbery? 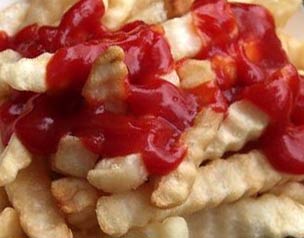 That was bad enough, but you had to be extremely careful or you would loose the measly portion. The tray was so small and flat that any chips lucky enough to be perched on top of another one tended to roll off and fall to the ground.

No, I'm afraid I don't think the burger vans and the mobile catering facilities at these events really serve up value for money!  I usually try to avoid them if I can.  Next time I will MAKE SURE that I bring my own food with me.

It was kind of amusing that the DJ who was providing the music for the afternoon kept announcing that "It was happy hour at the burger van".  He quickly followed this up with "The food isn't any cheaper, but at least they now serve you with a smile!"  Very appropriate I thought.  More like a sly grin because they know they have you over a bucket of chip fat!

It's a lot easier to leave a review detailing your experience with a chip shop than it is with a burger van. Does anyone know of such a place, this is the only forum I've found.
02/03/21 Ollie
1

Don't be so rued or you won't get served

as a burger van proprieter i ask you to bear in mind that sometimes at events like these there are huge pitch fees which seem to increase every year. some functions i can take a couple of grand in a few hours trading which is fantastic. but after a pitch fee and wages, stock costs and other overheads i can be left with 300-400 in profit for the day, which takes the day before to prepare for, and the rest of the evening to clean after leaving me with around £15-20 an hour. you have no idea how much hard work and unsociable hours go into these business' so please dont be so quick to judge. if the event organisers werent so greedy youd find the food prices would reflect it more. we all have famillies to feed and bills to pay, and you wont see many burger vans being pulled by range rovers!
22/03/17 jimbo
-1

I've never understood this drama about horse meat getting into our every day foodstuffs. Horse is delicious and selfishly expensive to buy from a decent butchery.
21/04/14 pet
-1

It's the same everywhere, even a ice Lilly at the seaside will cost up to £3 these days. I guess it's the only way such businesses can keep going with a bit of profit. I recommend taking a packed picnic and loads of bottled water, rather than relying on extortionate burger vans for sustenance. That doesn't mean you get away without buying an ice cream or two though, as a treat! :)
19/04/14 pet
0

The only burger van incident I've ever seen was an absolute classic and I swear this is true, a few years ago I was walking down the street with and old school mate and the owner of a burger van boasted to him about when he gave him a hard time at school, obviously it provoked a delayed response as he leaned over the counter and threw a couple of upper cuts at his former tormenter, next thing I know he's trying to climb over the counter to drag him out, anyway he locked himself in and shortly a small crowd appeared somehow the story of what was going on was told and before we knew it dozens of people appeared and started banging on the shutters, by this stage I was just watching in amazement and the last I saw the crowd had managed to turn the stand on its' side, at that point I decided to get the hell out of the way, I have no idea what happened next but I never saw the burger van again.
19/04/14 Tired and emotional
0

I had a similar experience many years ago but it wasn't at a burger van, I did once change my mind about using a burger van when I saw the person serving standing there with a fag in his mouth, fair put me off it did. One of my first jobs was working for a company who delivered office equipment, we were sent to install a cash register at a Chinese takeaway when we got there we were directed through a coridoor and passed the toilet, there was an elderly Chinese (obviously) woman sat on it, door wide open (actually both doors were wide open come to think of it) in front of her was a bucket and she was peeling potatoes while doing her business on the bog, never went back there and never got around to asking anyone what the chips were like either.
19/04/14 Tired and emotional
0

Oh dear! The burger van driver was probably not paying attention (was he on the toilet I wonder) and caught by surprise when you spotted him.

His reaction sounds typical of the sort of aggressive lower class who finds themselves caught out because of their lack of hygiene, cleanliness and/or care and then over reacts by attempting to deny another burger van user.

Try to forget the incident, I'm sure his burgers went up after the encounter as well and maybe next time he will pay more attention to toiletry habits.
18/04/14 collar
0

I went to a burger van today called Roys rolls in Deal kent parked by the cricket grounds in the layby, the attendant was not there when I turned up and was just walking back from using the toilet across the road with his hands down the front of his tracksuit, he stepped back into his burger van and asked me what I wanted, As I had just seen him with his hands down the front of his tracksuit, I asked him very politely, "firstly can I ask you to wash your hands please" He replied "I have just washed them in the toilet" I informed him I had just seen him walk back across the road with his hands in his pants and would like him to wash his hands first, he told me he thought I was being rude and then refused to server me, So forget the high prices, its the lack of Hygiene you need to worry about, this I thought was disgusting and you all need to stay away from this burger van with the attitude the owner had, I will never use another burger van now and suggest you do the same if you value your heath,
18/04/14 1 Un-Happy eater
1

When i visit burger vans and i see a jumbo hot dog sausage i am reminded of the occasion when i was anally intruded by 4 gentlemen in leather hats round the back of the blue oyster bar.