I'd like to bring up the subject of travellers and indeed the travelling community as it has been on the news this week.  First of all I'll start of by saying that I have nothing against travellers per se.  In fact I've often dreamt of living a nomadic lifestyle myself but for various reasons have been unable to fulfil that particular lifetime dream.  It's not an easy thing to do and I'm sure any of the travellers at Dale Farm will second that.  But I feel that we all have a responsibility towards the society we live in.  Whilst we are free to make lifestyle choices, we should also remember that we are expected to obey the law of the land - and that is my main point here.

There is one other point worth mentioning.  Dale Farm is noted as being a "traveller site", however, I thought (and perhaps I'm being naive here) that if you were a traveller you moved from place to place.  How many years have the "residents" of this particular "camp" been there?  Is it really as much as 10 years?  Surely the existence of such a large settled site is at odds with idea of being a traveller?  Perhaps I misunderstand, but I thought that real travellers lived a fairly solitary existence, either as individuals or small families.  When a large number of families choose to dwell in one place they are in fact a proper settled community rather than small nomadic tribe are they not?  As such surely they should be treated the same as everyone else? 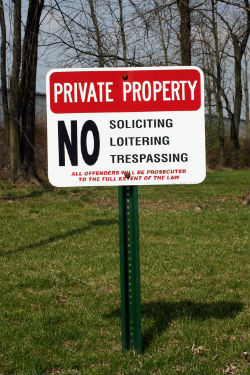 I understand that some of the land in this case was bought by the community some time ago, but the fact remains you need permission to build something and if you're camped out on land that doesn't belong to, then you can fully expect to be "moved on" at some point.  The law is the law, and it's pretty clear about trespassing and planning permission.  Come to think if it, I can't understand how some people can defend the actions of some of these travellers.  After all, I'm sure they wouldn't like it if they camped out in their back garden and decided to stay there - permanently!  If the land doesn't belong to you don't stay there, and if it does go through the proper channels if you want to build something!

Finally, there is another point I'd like to make regarding travellers.  As I said earlier I have nothing against the majority of law abiding citizens who call themselves travellers and actually move from place to place.  One thing I do have an issue with is the minority of these people who leave rubbish lying around when they vacate the area they have been staying in.  I observed this recently when some travelers stayed on a patch of waste ground close to where I work recently.  They were there for about a week and when they moved on they left behind bags of rubbish and all sorts.  I've also heard rumours of thefts and crime too - but I have no personal experience of this so I'm unwilling to comment on it personally.  At the end of the day if you are going to disparate lifestyle then you should expect to have to...  do certain things to fit into society as best you can.  For example clearing up your crap when you leave town would be a good start and trying not to pinch stuff - probably only a small number of individuals spoiling it for everyone, but that's all it takes and people tend to remember.

I have signs on my front door saying " No cold callers, salesmen, etc etc. Today two yobo's came banging asking what we did with our garden waste, I replied, " There's a group of travelers from the estate down the road that collects each week, give me your card with your names and I'll let them know they've got competition." The reaction was pure poetry.
05/10/17 Next
0

Parasites the lot of them. They take from everyone, unlawfully requisition land and property not belonging to them and set up a fortified base camp that you or I are kept away from through use of threats and intimidation. From there they send out their scavenger wagons to take your property trading any items that they don't want for cash so they don't have to pay any taxes.
They "educate" their feral young how to steal and use them to break into your property, teaching them that this is an honerable and traditional way of life.
Then we are told, not asked but told, that we must respect their rights to disrespect our rights and that any defamatory word against them or any action taken to try and curb their antisocial behaviour is predjudicial against them. (Much like this post will be no doubt).
27/03/13 Sandman
2

On another point about "travelers" or stationery's as i like to call them, Is there horses! Why do they always say that it part of there tradition? They buy them and stick them in a field and do nothing with them at all! including not feeding them, so if the grass all but gone in the field they go hungry. We had about ten of these horses in a field near us, and they were always getting out on to the A14! But the last time the escaped they caused a serious road accident, One person was killed and 4 of the horses had to be destroyed one in foal. The have charged one man with man slaughter and has court next week, that's if he hasn't skipped because he was on bail!
06/02/13 Fella
-5

Amazing, I didn’t know that my handkerchief was interested in current affairs; I thought its only interest was snot.http://flightsandfly.co.uk/
18/04/12 james
-10

The so called travellers (please don't call them gypsies) have a purpose in life to live rent free. Maybe the answer would be to impose land rent on them(perhaps same as pitching a caravan) and the other commodities that we have to pay for, i.e. community charge, water etc. If they don't pay confiscate their caravan. Perhaps humans rights would not allow that. Let them travel and stay at chargable sites and impose a duration on them tthen they would be travellers.
21/11/11 bigal
-8

Stalag, I only read the post that was at the top of the list and misread your meaning. I thought you were defending them. That will teach me to go back a few posts before I comment!
31/10/11 Fed up Pedestrian
4

No they arn't, they are getting preferencial treatment because of this stupid "ethnic minority" status that they have in law.
Like I said before, any other group of people would have been booted off the site within days.
30/10/11 Stalag 14
-12

No doubt someone will say we are the same person! Obviously site admin can see from the IP addresses that we aren't.
30/10/11 MikeP
-4

They may, wrongly in my opinion, have been granted the status of ethnic minority but the are not being discriminated against. They broke the law and contravened planning regulations and as such are being treated the same as anyone else would have been. In fact they have been treated with rather more leniency that you or I would have.
30/10/11 Fed up Pedestrian
-4

I have read the various articles which state that they are protected from discrimination. That's not what this is about. They are not being discriminated against, they are being asked to observe the same laws as anyone else.

Allowing them preferential status is discriminating against everyone else, so what's really happening is that parasitic vermin are being given preferential treatment, it's rather like affirmative employment which discrimates against white job seekers.
30/10/11 MikeP
-2

Dosn't matter what you or I think,or common sense indicates, Mikep, but in law they are a ethnic minority, and therefore have "rights" not applicable to the general population.
30/10/11 Stalag 14
-12

"The truth is this: many travellers - whether they move around a lot or not -"
Does anyone else see the paradox in this statement?

"The travelling community also have their own website"
For the edification of those of us who don't know enough about the pure and decent lifestyle of 'the travelling community' perhaps you could post the URL of this website so that we could be better informed and maybe view them with a little more sympathy?

"because being tolerant of others that are different ............. is a clear sing we live in a free country not a dictatorship."
Allowing criminals to run rings around law abiding citizens is a sign that we live in a society where law and order has broken down and where we are pandering to 'minority' groups for the sake of political correctness. You do not seem to grasp one simple thing. They are not an ethnic minority. They have chosen an alternative and parasitic lifestyle which they are enjoying at the expense of the rest of us. To put it bluntly, they are taking the piss, and people like you are allowing that to happen.
30/10/11 MikeP
-2

When all the minority groups in England, legal or illegal are totalled up, the sum is greater than the indigenous English population. Thus the English have become a passive minority group. It has gone from "Times they are a changing" to "Times have changed"
30/10/11 Boblet
-2

A man of swarthy complexion and his friend, who has an Irish accent (now to be called Travellers) pull up in their van outside an elderly person’s house and knock on the door.

To cut a long story short the travellers, being honest and reputable men, tarmac the elderly woman’s drive, charge but a pittance for their work, give a twenty year guarantee and depart with a glow in their heart at being such upright worthy citizens who pay taxes, rates, and don’t use red diesel in their vans.
A fitting role model for their uneducated offspring.