Have you ever noticed that supermarkets often have damaged stuff at the front of the shelf?  It might be a dented tin of baked beans or a frozen pizza where the box has got crushed.  In fact I have even seen a sellotaped-up box of frozen fish fingers - can you believe that?

Now, this could either be down to a) customers have picked them up, changed their mind and put them down again with the result being that they get endlessly stuck at the front of the shelf, or b) the supermarket leaves them them in the hope that a frazzled customer who's in a hurry will pick them up by mistake.

Surely the best thing to do would be to just chuck any damaged goods out with the garbage?  I would imagine the supermarket makes enough money without trying to get a few pence from damaged stuff. Or, here's an idea - sell these products off at a reduced price and by that, I mean a proper reduction not just a few pence off here and there. 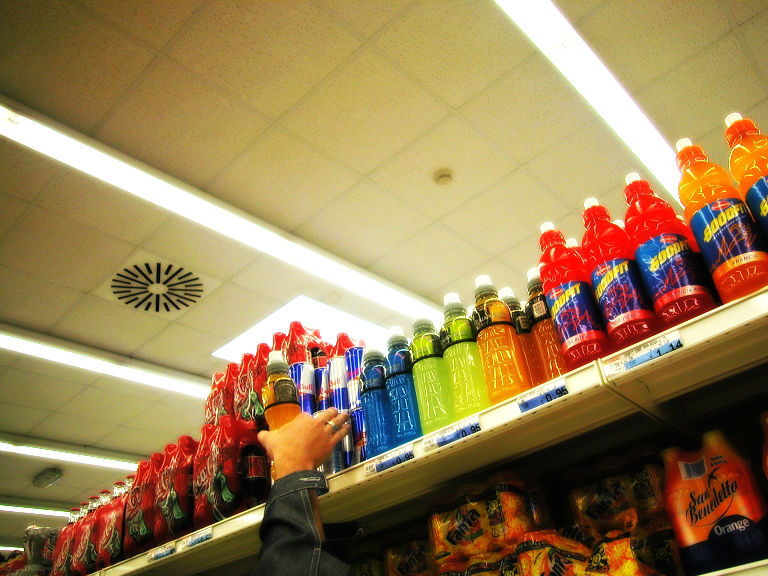 orange juice, but no plastic straw

It's not the first time I've ended up with a box of fresh orange juice but no plastic straw to push in the top.  Also, I got a box of beefburgers home and discovered there was a hole in the box. So, yes, I should be more careful.  I also think the supermarkets could just remove these products at the same time as they are checking the sell-by dates.

On a slightly different note and whilst we are talking about shopping and supermarkets, when the staff on the tills go for their breaks, could they try not to knock customers out of the way?  I know we can be a pain in the backside but still - the stampede can be a bit obvious and it's difficult trying to pay for shopping when another cashier is trying to squeeze past to go for their fag break.

It's all because of people who don't care and who throw things around. In fact I'm more concerned about clothing/footwear being damaged by people who try them on - not just in TKMaxx. I've just seen in a large department store a Â£315 pair of shoes damaged to a state where nobody would want to pay the full price for it anymore. Makes me feel like I were in some uncivilized country rather than in the UK.
02/01/14 Dave
-3

Most supermarkets will dump damaged goods in the reduction area, e.g. reducing something originally 3 for £10 to £3.25 each, in the hope that someone who is too thick with numbers would happily pick them up thinking he/she's got a real bargain.
02/01/14 Dave
0

If you can't be bothered to check if the straw is missing or there's a hole in your packet, do you honestly think a shelf stacker will.
23/12/13 Tiny
0

Never ever pick anything from the front of the shelve or indeed top of the fruit and veg container, always go to the back or dig down.

Good one! It's funny isn't how we've all gone back to buying beef and I'm still not sure whether the situation has changed. I just HOPE a few loopholes have been closed. I now alternate vegeburgers with beefburgers so I should be ok at least half the time.
05/12/13 infamous shopper
2

It is fairly common to find multipack items that have been opened and some of the contents removed. Used to see it with cans of beer or crisps, even sweets.
04/12/13 DW
7

I am constantly frustrated by the number of goods with opened boxes, why people have to open a fresh box to 'see the contents' when there is already an open box defeats me. It's fair enough to check the contents if you are purchasing, but mostly people are just being nosey.
04/12/13 Timelord
2

In our local B&Q they stock a lot of broken goods for sale on their shelves. Their management doesn't seem capable of managing their stock.
04/12/13 Bust Up
8

Quote... "Also, I got a box of beefburgers home and discovered there was a hole in the box."

Injured by a can of baked beans from Lidl

Too much plastic and cardboard packaging on goods