I visited the Welcome Break services on the M1 north bound carriageway last year in November and since I wasnt in any particular hurry, I thought I'd relax for a while by playing some of the slot machines in the gaming area.

I enjoyed playing the machines for a while and not being a gambling man I was quite surprised when I got lucky and won over £100 on one of the games.

As it was quite a tidy sum of money, I decided it would be a prudent to have someone as a witness before I pressed the 'collect' button to claim my prize.  An assistant manager on the premises was more than happy to do this, so I pressed the button and then waited.  The machine had begun to dispense my winnings when suddenly, about half way through it ran out of cash and just stopped; I was glad in the end I had taken the decision to have someone along to act as a witness! 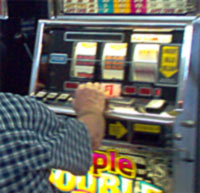 The assistant advised me that I would probably have to wait for an engineer to come out, but was unable to tell me how long that would take.  As I was quite keen to continue my journey, I asked to speak to their manager about the problem.  The manager on duty that day, one Mr C Faver was pleasant enough, and he assured me that I would receive the rest of my money within a few days. At my request, he wrote me a receipt with the details on, which I accepted and then carried on my journey.  I assumed that I would be sent a cheque in the post.

To date however, I still have not received any communication and more to the point haven't received any of the money that I won.  Attempts to contact Mr Faver, the manager that I spoke with have been unsuccessful and I do feel that I have been somewhat ripped off, or at least treated shoddily.

If I do not receive the money that I am owed in the very near future I will definitely seek legal advice with a view to taking legal action against the operator of the gaming room at these services.

This is happening all the time and it's funny that the machines never go wrong while putting money in or while in actual play. It's a CON! they hope you will forget it because most people don't have the time to wait hours for an engineer! I am a coach driver and spend hours in service stations so i know what I am talking about!
18/11/16 Marky
1

They tried to tell me that to come back for my money in a few days but I went back the same day and got my money I'm glad I took the timeout to go back and get my money sorry to hear you haven't got yours yet Band fruit machines.
25/09/12 Pete
-1

If you're my husband in disguise, then go forth and multiply because you have said EXACTLY what he says to me!!

Re your post above. If you don’t have anything constructive to say then why don’t you p*** off.

Re Welcome Break having something better to do. I very much doubt it somehow about 50% of their profits come from AWP’s and last time. Given the fact that the service station tends to lose money on the retail side of things the fruit machines is where they do make money.

It's not really a gambling issue as far as I can see. It's more about being ripped off and not treated with a reasonable degree of respect. I don't play the fruit machines myself, but if I had a reasonable win I would really expect either the funds from the machine or some kind of cashier cheque from the owner of the premises where the slot machine is situated.

As for Nikki, I have found her posts on this site to be a worthwhile contribution, unlike some others I could mention
09/02/06 Roger
6

Couldn't AGREE more.Nikki seems to frequent EVERY post on here, as if she/he hasn't anything else better to do.

Talk about a SAD life, she/he ALWAYS parrots on about getting 'almost killed' when she/he got knocked off the horse,by a motorcyclist doing a 100 MPH. and the horse getting killed.

AS for the original poster not getting his winnings, a firm letter of complaint to MD of welcome break. Only send a PHOTO copy of receipt,also a copy of letter to the License autjority who supplies the 'GAMING LICENSE'
07/02/06 an OLD friend
6

Nikki, I have read your comments on just about every subject published on Weekly gripe. You sound a very sad gal. Get a life!!
29/01/06 Micky
-7

what a nasty lot you are. This guy was having a bit of harmless fun, won some money, and then was cheated out of his prize.

The author of this article should find out the address of Welcome Break's Head Office and the name of the Managing Director and write a letter to him, marked Personal & Confidential, outlining what happened.
25/01/06 Nikki
-13

Tough luck! The moral of this story is simple. DON'T waste your money on any more slot machines!! PS. I hope Welcome Break puts your money towards cheaper sandwiches.
25/01/06 Micky
-4

Whoa...Im sure the Welcome Break people have more on their plate to worry about than you and your gambling addiction. Go see a threapist.
25/01/06 David G Hooter
-3