I recently went to see ACDC and some other bands at the bowl in Milton Keynes and although I had a great day out there with my friends, the experience was somewhat tainted because I felt that we were being seriously ripped off by the various food and drink vendors around the arena.

When we bought our tickets the small print on the back told us that you couldn't take in certain items including food, drink cans, bottles, alcohol, cameras and believe it or not umbrellas.  Fair enough I thought, I can understand some of that and I expect that they'll probably be selling food and beer inside although I couldn't figure out the umbrella thing but thankfully it didn't rain that day.  What I found when I got inside though was simply unbelievable. 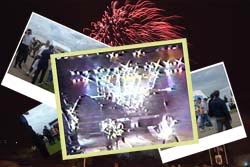 All the things we were told not to take in were on sale including disposable cameras, umbrellas and of course various food and beer stalls.  My main gripe however is the blatant daylight robbery that went on here as typically most items of food for example cheeseburgers; hot dogs and bacon baguettes were all very expensive indeed.  If you wanted to enjoy a beer with your snack then this would set you back a small fortune indeed and there was a very poor choice on offer so it was either a cup of watery lager or some cider, and not a very good one at that.

No food, drink cans, bottles or alcohol to be taken to Milton Keynes Bowl

I know these guys all have overheads and it's really nice to be able to just come along and grab a burger and a drink whenever you feel like one, but is it really necessary to fleece us again after we've just forked out £30 to £50 or more for a ticket to see the bands and will probably spend at least another £30 or more on a tour t-shirt?  I think it is totally unacceptable that we don't even have the choice of bringing refreshments of our own to the concert, if this was possible at least then we could eat and drink what we want and be a bit richer at the same time

I don't think there's much we can do about this so I guess for now we'll just have to put up and shut up, either that or stop going to see our favourite bands at open air concerts which as far as I'm concerned isn't really an option.  Maybe next time I go to see a band at Milton Keynes Bowl I'll stuff myself silly in the morning before I go (lots of protein as I hear that's good for keeping hunger pangs away) and of course most venues provide water anyway.

It's a difficult one - Insist on a food kitty before you go in, shared out on a food consumed basis, ie £10 each adult. Your plates must then put in the middle of the table and any left-over amount to be covered away from flys for each member of their plate to share with their own family, while you just put in your own. Much simpler and I'm sure they won't think your trying to eat theirs! You can then each have some pudding and again share it accordingly, it should all run nice and smoothly during the evening!
01/07/14 collar
-1

So make sure you load up on food before you go in. They MUST let you bring your own food in (reasonable amount) if you have a medical condition or special dietry needs. If you bring stuff and they really don't want to let you in, just eat/drink it all before you go in. The vendors choose to pay the extortionate pitch fees so they know exactly what they are getting involved in and have no problem over charging for what is IMO terrible food (e.g £5 or £6 for a dry two rasher back buttie), £4+ for an ice cream! As for their beer...you really are better off drinking water.
01/07/14 Ed Vedder
1

the prices charged are dictated by the ground rent (horrendously expensive) and are some times dictated by the promoters. They even make the vendors buy everything from them. Two bites of the cherry or burger,chips or what ever you fancy.
25/03/11 duffield45
-8

£30 and you saw ACDC you have no right to moan. Donnington park 2010 acdc headlining, 3 day festival 5 day camping £160, excluding travel, tent, food, drink etc and the prices at donnington were more expensive than that. think urself lucky that u only spent £30 on a ticket thats rediciously cheap
03/11/10 sam2212
2

I saw jay-z and linkin park there last year, 95 quid for vip ticket started at 12 finished at 2, best day ever best 95 quid I have ever spent, drinks and food were top notch and deffinately worth the money.
09/06/09 me
9

I saw Metallica at the Bowl in 1993. I wasn't too bothered about the prices. They seemed pretty average compared to some places today. Saw the Donnington Rock Festival in 1994, and you could bring your own booze as long as it was in plastic containers. I asked someone to sell me a pint for a quid, and he gave it me for free.

I was at the Sex Pistols at Crystal Palace, and I sneaked 4 cans of beer in, rather than pay thru the nose for a pint of piss water.
28/05/09 WolvoExPunk
0

I managed to get into Sheffield Hallam Arena (or whatever it's called) to see Elton John, complete with two jiffy bags each with 2 small bottles of wine in them. The jiffy bags were sealed with postage stamped. When my bag was searched I said I couldn't open them because they were addressed to my company and not me, and the guard was quite happy to let it go. Legally not sure whether guards would be allowed to open mailed packages - are they? I suppose he could have refused entry, or ensured that the bag was put in the cloakroom or something.

I also took a rucksack with a bottle of drink (only water, but that was banned) into a concert at Hyde Park. They said I had to put it into the "cloakroom" (tent) which I duly did. After the concert started, I went back to the "cloakroom" and picked up my bag and took it to my seat. Ridiculous!

Small and petty, but satisfying nonetheless. If the promoters/venues/caterers got their pricing a bit more reasonable - or quality to match the pricing - then there would be no need for me to do this.
30/04/09 Swindonian
10

I agree with gigger. These food and stuff are overpriced for a reason. And besides, if you go to football matches, its' not any better. In pricing that is.
22/02/09 MasterChief 117
6

You lot are a bunch of strange people. It's obvious that you guys don't go to many gigs. If you bothered going to some other venues you will see that they are all over priced and the prices at the national bowl are the same as anywhere else. I've been to some 20 venues and they are all a rip off. But I don't go for the food, I go for the music.

Get a life. Just because you're a child brought up in the "have loads of money to chuck around generation" doesn't meant to say that the rip-off is right. It's people like you that cause inflation because you pay up, no matter what.

Maybe your daddy gives you too much pocket money. The rest of us aren't so wealthy - there again maybe we would be if scum bucket's like you and your kind weren't ripping everyone off.
22/05/07 Hoopie
-9

£2.50 is the average national price for a burger. A cheese burger is £3!
Maybe if you came out of your little Harry Potter cupboard into the real world you'd realise you're not getting a penny sweet for a penny anymore!
Prices go up. Deal with it and get a life.